I believe drawing is the single most important skill for any visual artist to acquire, whether they are a painter, illustrator, graphic designer, or fashion designer. It is simply the act of “seeing” made visual. When one learns how to draw, what they are really learning is the ability to see more clearly and communicate what they see or can imagine. As such, drawing is a tool for study, and communication even before it is a tool for making art. When you draw a picture, do you draw the character in blocks first or what? I just can’t seem to get my characters anatomically right.

Don't use plagiarized sources.
Get Your Custom Essay on Drawing Just from $13,9/Page

I saw your booklist on your site. Do you know of any books which teach you to draw the body in blocks? From Christine Lau

I don’t draw “blocks” first when drawing a figure. Usually I’ll do a very loose, light, scribbly “gesture” drawing instead. If you want to learn the “blocks” method, try any of the books by George Bridgeman, Andrew Loomis, or the books by Robert Beverly Hale.

(all are listed on my site) Avoid books by Burne Hogarth, (one of my old teachers) as they aren’t very accurate and can be very misleading. (note: Glenn Vilppu’s books are also an excellent source!) By far, the best book for anatomy though is the book by Stephen Rogers Peck (also on the site). There is no “quick fix” for drawing anatomy…it just takes a few years of study. Keep it up though, it’s worth it once you get a handle on it!!! p.s. Also, draw from live nude models as much as possible, that’s the best method to learn it. …What is the hardest thing to draw?

From Everybody! Nothing is really harder or easier to draw in a mechanical sense. If a person can draw one thing, they are perfectly capable of drawing something else with the same degree of accuracy. The problem is in the phrase “the same degree of accuracy.” If someone says they can draw, for instance, landscapes, but they can’t draw people, what they are really saying is, “when I draw landscapes, I draw well enough that no one can tell what I’ve drawn incorrectly.” The reason people, and especially faces, are so difficult to draw is not because they themselves are any harder to draw than a tree. What changes is our tolerance as viewers for any degree of inaccuracy. We are so intimately familiar with faces and their associated nuances, that the slightest deviation appears as a gross misproportion. Because of this, I am constantly demanding my students draw people, and especially self-portraits, because they effectively highlight any weak skill areas that need attention. My students erroneously believe it’s because I’m sadistic. …What purpose does drawing have for artists today?

From Carole (Shropshire, United Kingdom) I think people often misrepresent drawing as a medium, or group of mediums, rather than an activity. I see drawing as the visual equivalent of language. It is simply the way we communicate ideas visually through a series of marks on a ground. So to rephrase the question, it is a little like asking “What purpose does speaking have for people today?” For both, the answer I would give is the communication of information. This information can take the form of ideas, thoughts, commentary, entertainment, or just literal facts, but for all of these, drawing is just the mode of transmission. How artfully this is done is another, separate, issue. In the case of artists specifically, it is the fastest and most efficient way to represent an idea visually. Far more immediate than any other way of doing it, a quickly drawn sketch or thumbnail is usually the “first look” an artist has at how they might execute an idea. 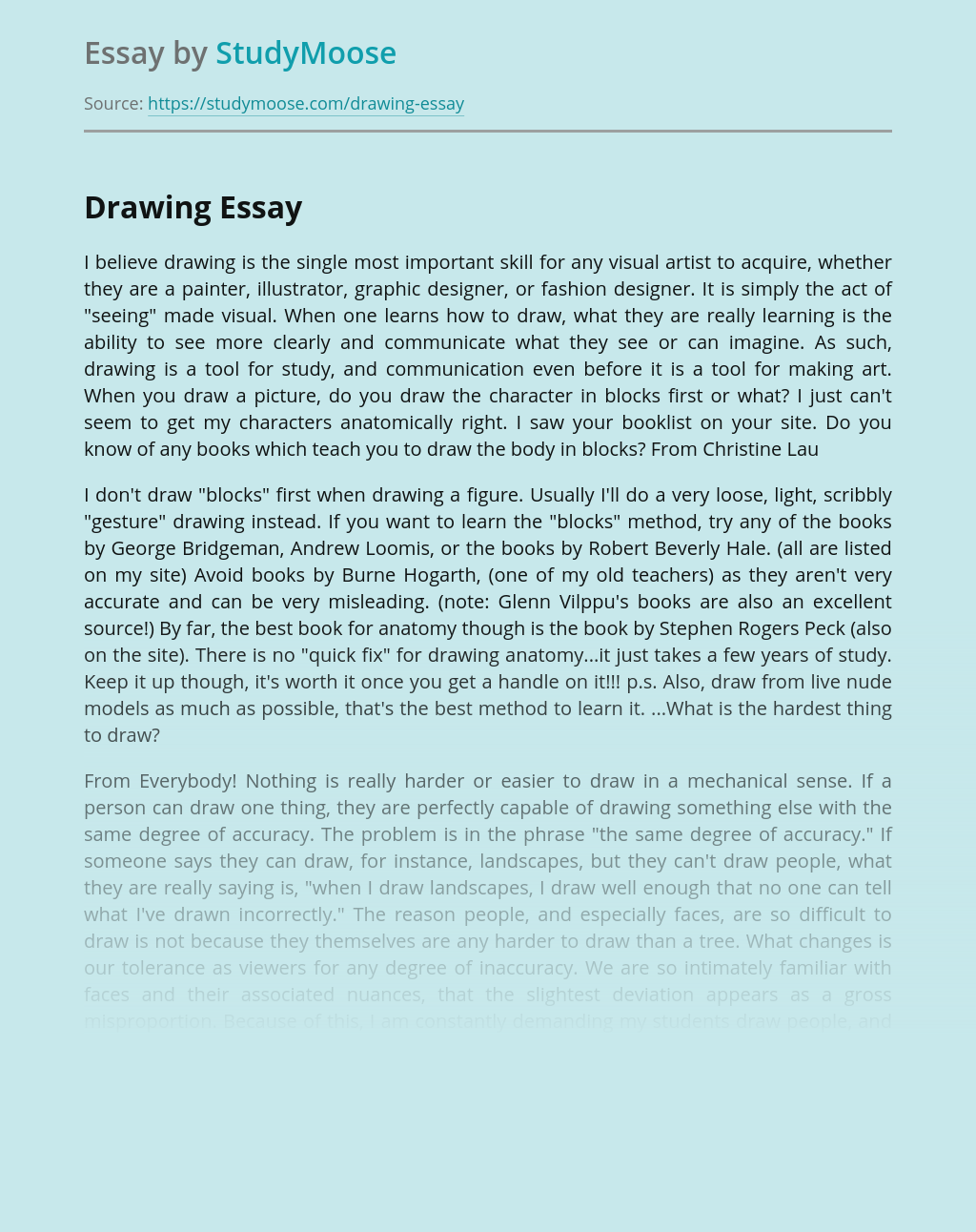 1.2 – Explain why reflecting on work activities is an important way to develop own knowledge and skills Reflecting on work activities in an important way to develop knowledge, skills and practice it enables us to reach our goals, achieve a better understanding of ourselves, self-awareness, strengths and weaknesses. To be able to reflect on... VIEW ESSAY

View sample
"Rolls for the Czar" by R. Kinkead

In “Rolls for the Czar,” by R. Kinkead, and in “What is Intelligence, Anyway?” by Isaac Asimov, intelligence assumes different forms. The two types of intelligence referred to are book smarts and quick wit. In the first story, Markov the baker demonstrates quick wit, while in the second story, Isaac Asimov ironically does not. In... VIEW ESSAY

In the article “What Does It Mean to Be Well-Educated” Mr. Kohn point out 6 points on being educated. Point 1.The Point of Schooling. (Nel Noddings the professor emerita at Stanford University, urges us to reject “the deadly notion that the schools’ first priority should be intellectual development” and contends that “the main aim of... VIEW ESSAY

Socialization is the process by which children and adults learn from others. We begin learning from others during the early days of life; and most people continue their social learning all through life (unless some mental or physical disability slows or stops the learning process). Sometimes the learning is fun, as when we learn a... VIEW ESSAY

View sample
"The Role of the teacher" by Irving layton

In our society today, many students do very poorly in school. But what is the reason for this? In Irving Layton’s essay ‘The Role of The Teacher’ he believes that teachers shouldn’t be fully blamed, and that one of main reasons why students do poorly in school are due to the cut backs and poor... VIEW ESSAY