Dr. Charles Richard Drew was a renowned pioneer in Medical Science. He is known for his research in blood plasma or blood without cells, and was responsible for founding two of the largest blood bank in the world. Due to his research in blood plasma preservation during world war two, he was recognized for saving the lives of many wounded British citizens. Alongside with this, he became the director of the first American Red Cross, spearheading a large scale blood collection and became a diplomat of surgery at John Hopkins University’s American Board of Surgery in 1941.

Don't use plagiarized sources. Get your custom essay on
“ Dr Charles Richard Drew a Pioneer in Medical Science ”
Get custom paper
NEW! smart matching with writer

A year later, Drew became the first surgeon of African American descent to serve as the board examiner (Charles R. Drew, 2009). Aside from his contribution in the field of medical science, Dr. Drew is also well recognized as one the first African Americans to stand up against racial segregation, making him a perceived martyr among the black society (Hermitt, 2002). Early life and education Born on the 3rd of June 1904 in Washington D.

Charles had a charmed childhood. He excelled both in academic and sports, bringing in several medals to his school during his elementary and high school years (Hermitt, 2002). Drew’s athleticism was put into good use when he was able to attend West Massachusetts’s Amherst College through an athletic scholarship program. He was able to attain several sporting awards and graduated with honors.

In order to go to a medical school Charles worked for a couple of years as a chemistry and biology professor as well as the director of college sports program in Morgan State College in Baltimore, Maryland.

By 1928 he was able to apply to a medical school. However, during that period African Americans who wish to become doctors were less privileged. There are only two colleges for them to choose from. The first was at Howard University where Drew was rejected due to lack of credits in English, and the second was at Harvard University, where Charles was accepted for the following school year. However, Charles did not want to wait longer. Hence, he applied at Montreal, Canada’s McGuill University where he was immediately accepted (Charles R. Drew, 2009).

During his time at McGuill University, Charles Drew continued to excel both in sports and academics. He even won the university’s annual neuroanatomy award in 1930 and became a member of the school’s honorary medical society, Alpha Phi Omega. During the same period, Drew began his research regarding blood transfusion through the influence of a visiting professor, Dr. John Beattie. The different blood types were also discovered during the same era. Hence, the doctors were able to give patients compatible blood types and were able to avoid the negative effects of mixing incompatible types of blood.

Despite the said advancement, blood was still highly perishable, thereby making the availability of appropriate blood types scarce. When Drew and Beattie started their blood research in 1930, blood’s shelf life is only possible within seven days before it began to spoil (Charles R. Drew, 2009). After he graduated from McGuill with a Medical Degree and Master of Surgery degree, Drew had his internship at Royal Victoria Hospital and had his residency at Montreal General. He still continued researching with John Beattie.

The untimely death of his father in 1934 caused Drew to return to Washington to watch over his family. By 1935 he secured a position as a pathology professor in Howard University Medical School, and a year later obtained his one-year residency at Freedman’s Hospital in Washington (Charles R. Drew, 2009). The development of blood preservation Drew continued his blood research at Columbia University-Presbyterian Hospital in New York. Under the patronage of the Department of Surgery, Drew worked closely with Dr. H. L. Corwin and Dr. John Scudder on the issue of lengthening the shelf life of blood.

At that point, he began his study with plasma as a substitute for whole blood. It is noteworthy that red blood cells have an important substance that could determine blood types. The absence of such substance in the presence of plasma is an indication that there is no need for the donor’s and the recipient’s blood to match, making such perspective ideal in emergency cases. While Dr. Drew was supervising a blood bank at the same university, he discovered a method to preserve and process blood plasma in order to lengthen its storage life and ship it to great distances.

He found out that “dehydrated plasma could be reconstituted by adding water just before the transfusion. ” Hence, his discovery became the foundation of blood preservation (Charles R. Drew, 2009, n. p. ). Personal perspectives on racial segregation in terms of blood donation Right after his graduation at Columbia University in 1940, wherein he attained the first Doctor of Science degree for an African American, he was asked to become the medical supervisor for the campaign known as “Blood for Britain,” spearheaded by the Blood Transfusion Betterment Association during the height of World War II.

The invitation was due in part to his dissertation: “Banked Blood: A study in blood preservation,” wherein he presented that liquid plasma has longer shelf life compared to whole blood. Prior to the “Blood for Britain” intervention, there was a shortage of blood for treating the wounded British individuals. As a solution, Drew initiated the use of refrigerator equipped trucks known as “blood mobiles,” which at present are still used by the Red Cross for blood drives. The success of the said intervention helped Drew to secure his position as the director of New York’s Red Cross Blood Bank.

Drew was asked to initiate a massive blood drive, consisting of 100,000 donors, to help the US army and navy. However, the war department sent out directives to the Red Cross that blood should be categorized according to the donor’s race. Likewise, African American donors should be refused. Such issue stirred wide spread controversy and enraged Drew. He condemned the said policy and claimed that there was no scientific basis for such blood segregation. His statements were backed up by other scientists, making the government to eventually allow African American volunteers to donate blood.

The outspoken action of Drew regarding racial matters at that time was rare because most blacks are careful not to make any disputes with the white community. Drew resigned from his position with the United States Army and returned to teaching as a professor of surgery at Howard University and became the chief surgeon at Freedman’s hospital. By 1943, Dr. Charles Richard Drew was the first African American surgeon to become an examiner for the American Board Surgery.

He served as an inspiration to many individuals and received various awards and honorary degrees during his lifetime, which include the 1944 “National Association for the Advancement of Colored People (NAACP) Spingam Medal. ” He also wrote various studies regarding blood and became a well known member of the International College of Surgeons in 1946 (Charles R. Drew, 2009, n. p. ). Personal life and death Dr. Charles Richard Drew married Lenore Robbins in 1939, and had four children. He continued teaching at Washington and has also worked as a consultant to the Surgeon General, assessing hospital facilities in Europe.

On March 31, 1950 Drew and some of his colleagues were asked to attend a medical meeting at Tuskegee Institute. While Drew was driving near Burlington, North Carolina, he dozed off causing his car to overturn, resulting to his death. The story of Dr. Charles Richard Drew’s death was widely disputed. Rumors has it that white doctors in the segregated hospital, where he was rushed after the incident, refused to treat him because it was presumed that limited beds were set aside for black patients and it was full during the time of the incident.

Hence, it was believed that the attending doctors left Drew to bleed to death. Such account of Dr. Drew’s final hours persisted for many years and is still accepted as a fact by many people today. However, historian Spencie Love stated in her book “One blood: The death and resurrection of Charles R. Drew” that the surrounding story of the doctor’s death was far more fictitious than factual. The statements gathered from the individuals who were with him stated that all the doctors in the hospital where he was taken were aware of who he is and fought for more than an hour to revive him.

Likewise, his colleagues also believed that there was no mistreatment or neglect (Charles R. Drew, 2009, n. p. ). The untimely death of Dr. Charles Richard Drew at the age of 45 caused a great loss in the medical field. He left behind a legacy of various life-saving strategies that allowed many of his students to follow his track in the medical landscape. The Clinical Center of the National Institutes of Health unveiled Drew’s portrait in 1976. He was the first African American to be included in the said gallery of scientists (Charles R. Drew, 2009).

Indeed, the contributions of Dr. Charles Richard Drew created a significant leap in the field of blood transfusions and preservation. His studies had a huge impact on the lives of many individuals during the World War II and are continuously affecting the lives of many individuals today. His refusal to participate in the practice of systematic discrimination also contributed in the fight against racial injustice during the 1940’s. In these regard, one can easily assume that what Dr. Drew did in the past has shaped the medical and social climate of today, and without his contributions humanity might still be suffering from various medical and social illnesses. 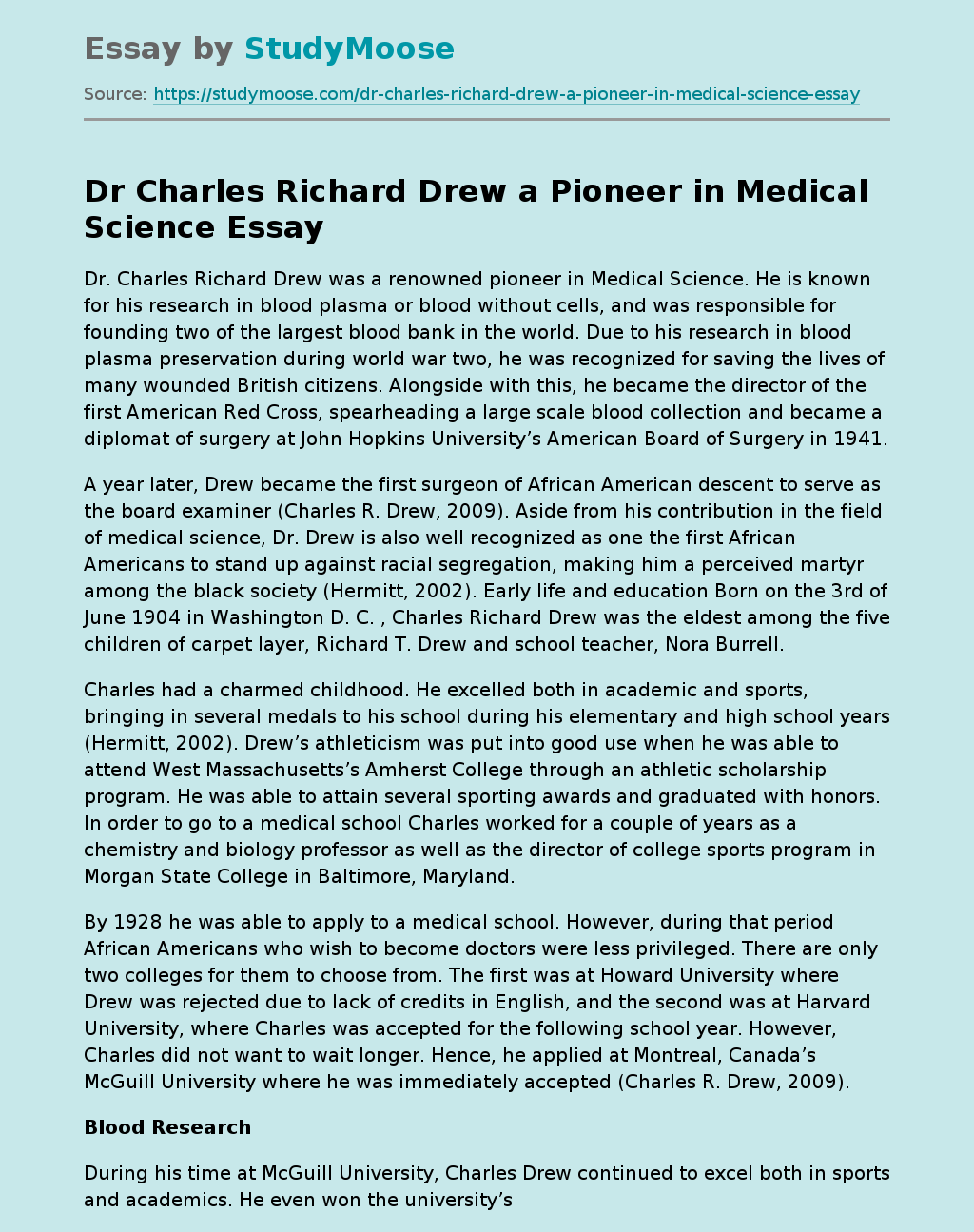