Gandhi ji said:- ‘Any young man who takes dowry fo getting married , disrespects his education, country and womanhood.’ Our society is full of evil systems. One of those evil systems is dowry. Dowry is defined as the ‘price paid by parents to get their daughters married as well for getting them the place in the family which they deserve.’ Over the years cases of dowry harassment and cases of dowry deaths have multiplied. In Hindu marriage system, a system termed as ‘kanyaddan’ is performed in which the bride is given to the husband and in-laws along with huge sums of money, furniture, house, car, etc.

Don't use plagiarized sources.
Get Your Custom Essay on ?Dowry Problem in India Just from $13,9/Page

or more precisely bride along with dowry. The dowry system has converted something as pure as marriage into a business transaction and the bride into a saleable commodity or a key to more money.

Debts are taken so that the groom’s family can be provided with a large dowry. This creates a burden on the bride’s family.

Girls begin to think of themselves as a burden on their families and accept spinsterhood as their fate or commit suicide. Dowry has also led to an increase in female feticide and female infanticide which has greatly affected the male-female ratio in the country. Heavy dowry is demanded for educated boys. This has ruined the lives of many brilliant girls. Brilliant, educated and economically independent girls cannot get married to so-called educated boys because their parents cannot provide their in-laws with a huge dowry demanded by them. Even after marriage such girls are tortured to bring in more money, and ultimately, they either commit suicide or lose their mental balance. People who believe in taking dowry say that dowry acts as a financial help to the newlyweds. They say that while marriage acts as a life insurance for girls, marriage acts as its premium.

They also say that a girl who carries a respectable amount of dowry to her husband and in-laws feels confident while a girl who carries a less amount of dowry feels uncomfortable and apprehensive. In 1961, the government passed the Dowry Prohibition Act to abolish the dowry system. However, this act, instead of subsiding dowry, took its roots to a deeper level in the society. It is said that on an average one woman is being killed in every four hours n the issue of dowry in India. However, strong public rejection is being noticed on the issue of dowry among the youth. They are not ready to give or take dowry for getting married. They are really coming forward to abolish the evil. Our society needs such responsible youth to abolish the evil system of dowry in India. There is finally a positive beam of light shown in utmost darkness, but to convert this positive beam of light into utmost lightness, we, the common people of India have to take effective remedial steps:

– We should start a strong propaganda to abolish the evil. People should make demonstrations against those who take dowry. Strict laws should be passed to prohibit taking and giving dowry. Young girls should take serious action when their family is demanded with dowry. Proper education should be imparted to girls as well as they should be made economically independent to accelerate the process. Love marriages, inter-caste marriages as well as inter-provisional marriages may also help. Cases of “dowry free” marriages should be the news item on the bulletin. This will encourage the youth. Right now, in our society, a man who does not marry for love, learns to marry for possessions. We have to change the picture. “SAY NO TO DOWRY”

?Dowry Problem in India. (2016, May 01). Retrieved from https://studymoose.com/dowry-problem-in-india-essay 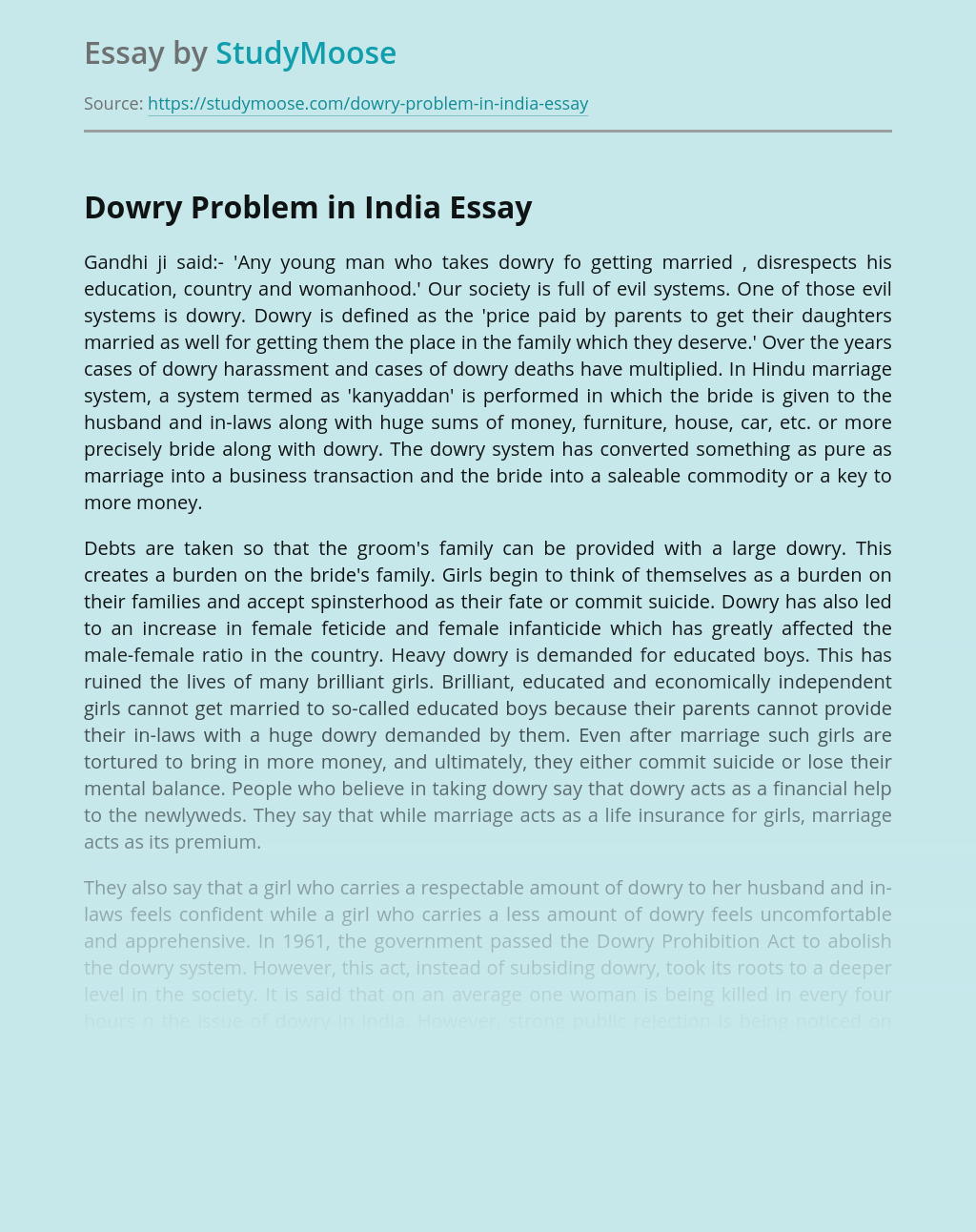 As human beings we need to socialise and communicate with others. Of all the relations that we have in life, the most precious and strong are the ones with our families. Many a times during adversities when the closest of friends may leave us, our families – parents, siblings, spouses, children etc. are those who...

In his essay on tragedy, Arthur Miller once wrote “the tragic feeling is evoked in us when we are in the presence of a character who is ready to lay down his life, if need be, to secure one thing–his sense of personal dignity.” This insightful view of the common man’s ability to be a...

Introduction I am the event coordinator of a destination wedding. A destination wedding is defined as a wedding celebration in an exotic or resort location. This will be a three day trip to Paradise Island, Bahamas and will be planning from now until wedding day. The day of the wedding will be December 14, 2013....