Downtown Beirut: a spot pour les bourgeois In his article Downtown Beirut: A City of Ghosts? , published in the Alakhbar English journal on Saturday, January 7 2012, Ahmed Mohsen describes the heart of Beirut as an empty, fake, artificial hanging spot for the elite, so distant and alienated from the culture and the civilization of the good old Beirut known for its diversity among different social classes.

Mohsen considers rebuilding the capital after the traumatizing war have indeed its true identity and covered its alleys with fake architecture that destroyed the historical beauty of what once was known as “the Paris of the Middle East”.

Don't use plagiarized sources. Get your custom essay on
“ Downtown Beirut, Response on Mohsen’s Article ”
Get custom paper
NEW! smart matching with writer

For many, what’s known today as ” Solidere “, projects the new post war era, the era of a flourishing economy and an original society. In fact, the new buildings are indeed nothing more than an overpriced imitation of other countries’ architecture leaving the old Beirut and its rich Middle Eastern history nothing more than a memory along with its social traditions.

Mohsen pointed out in his article that after rebuilding the center of the capital, the original citizens in Wadi Abu Jamil and its surroundings are no longer there. According to the author’s article “Wadi Abu Jamil’s original residents and owners have vanished. ” (Page #120) I personally believe that the old Beirut with its old, wrecked buildings and crowded dirty alleys is a unique haven of coexistence between the various religious sects and the different social classes unlike the new “Down Town” or “DT” with its new original buildings inhabited by only one social class.

The “High” class. The reconstruction of Beirut put money and artificial beauty over the unity of the classes and the unity of the different peoples that lived for centuries in Lebanon and their reunification after the devastating war. In his article, the author criticized the fact that only rich people can shop or hang out in the “DT” saying “For those who can afford it, the place to shop in downtown is “Beirut souks”. “(Page # 119). In fact, all the shops present in downtown are indeed expensive for the average citizen.

But the problem is that even the most basic things in a small shop are much more expensive than any other place in the country. Buying a simple cone of ice cream will cost you something around 2000 L. L in Lebanon, but buying it from downtown will cost you about 7000 L. L. All the artificial beauty that is supposed to encourage the Lebanese around the world to go back to their country is in fact, a repulsive, ugly place reserved for the elite and rich tourists from neighboring Arabic countries. 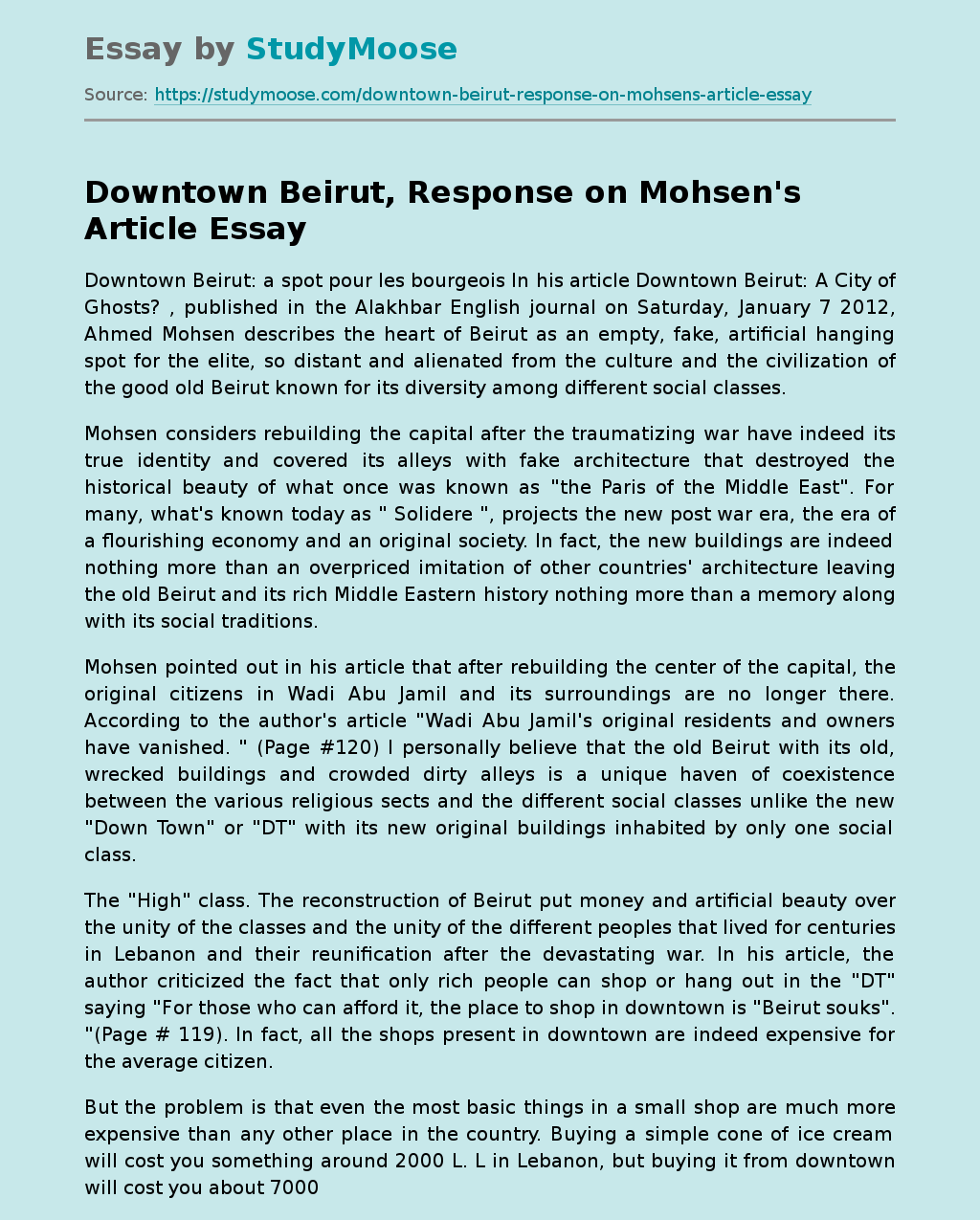