Do you tend to believe everything people tell you?

To naively think that a certain behavior of another person is set up on stories you hear every day. Even though some stories may be true and could even increase people’s general knowledge, readers need to be cautious for sayings that may involve people’s culture or anything of that sort. In an episode of a show TED Talk, Chimamanda Adichie, a Nigerian writer, explained the consequences of a single story from her perspective. During the speech, Adichie told a wonderful and funny tale from her past, which explained her first encounter with a single story.

Don't use plagiarized sources. Get your custom essay on
“ Do you tend to believe everything people tell you? ”
Get custom paper
NEW! smart matching with writer

Not only does Adichie explained the consequence of a single story in her speech, but she also told how it can affect the way a person behaves or thinks around strangers and foreigners. Single stories are dangerous, and as fellow individuals who should think deeply for the future, we should look for a method to prevent it from happening worldwide.

Accepting or agreeing to a single story does not mean you are a simple-minded person, perhaps some people just do not know any information that much and it is totally normal.

However, a person’s characteristic can be seen by how they handle single-stories. Some people choose to accept these stories just the way it is; while others tend to look for answers to fulfill their curiosity. A single-story which I believe is the fact that all Muslims hate dogs. It is when I was roughly 10 years old, and back then I did not know the fact that in their religion it is prohibited to keep a dog as a pet.

Therefore I was confused, It may have been the first time I have seen a person who hated dogs and I am ashamed to say that I immediately began to think negative thoughts toward this kind of people. This single-story was stuck inside my head for quite a while, until a time where I had a Muslim friend who in fact, loved dogs. Thankfully my friend explained it to me all about it and it surprised me to see how ignorant I really was back then. Not only did I ignored their culture, but it did not cross my mind the fact that there are lots of cultures and uniqueness in each group of people which we still have to discover.

It is embarrassing enough to think about the stereotype of a country or groups of people, especially when most of those are not true at all. As simple as a story may be, it could surprisingly affect people’s lives more than we should know. In addition to this, in Adichie’s TED Talk, she also stated that one tiny thing each person can do is to prevent this from happening is to simply ignore any single story you may have heard. However, it is hard to escape things like single stories, because of no matter who you are or where you are from, if another person doesn’t know you well, a single story is likely going to take place. What can people do to stop using single stories? It is a hard obstacle, that is for sure but nothing is impossible. What people can start doing is to read, even though it is dreadful for some people, gaining knowledge of other countries and their cultures can prevent single stories from happening. Other than that, every person should appreciate the diversity that the world has because that is what makes us humans unique.

In conclusion, single stories are bad influences on people. Not only does it state an imperfect stereotype of a certain culture, but it could also ruin a person’s dignity as well. No good thing could come out of a single story, however, escaping it is not an easy job too. Many people are too unambitious to get information about other cultures or countries even though it is one of many ways to prevent single stories from happening. Another action a person can do is the same as what Adichie stated; which is to ignore it and this way we are able to have a free mind, a state where one can enjoy life the way it was supposed to be enjoyed.

Do you tend to believe everything people tell you?. (2019, Dec 14). Retrieved from http://studymoose.com/do-you-tend-to-believe-everything-people-tell-you-essay 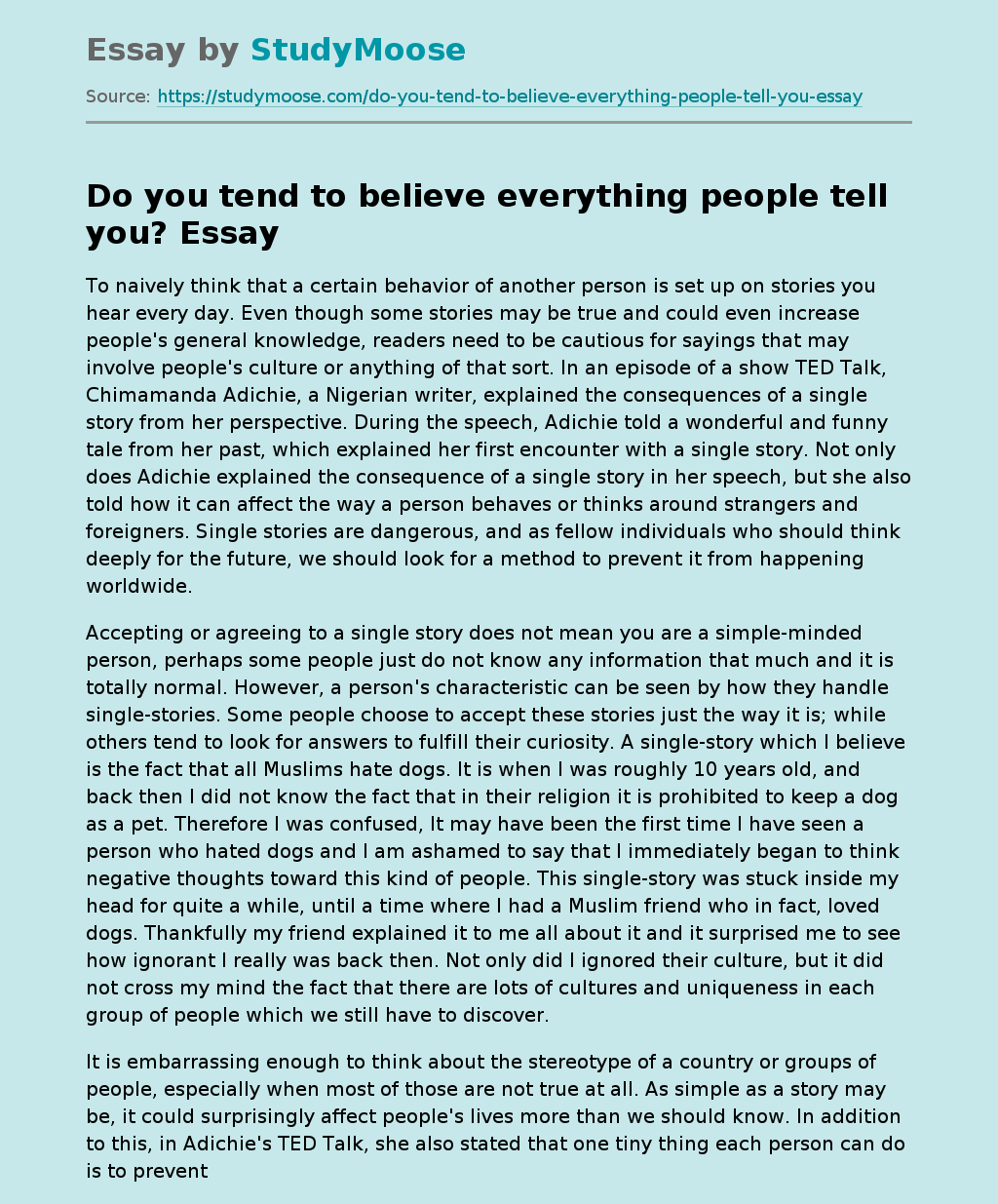