In this essay, the point of interest will be the market research disaster of Walt Disney Company after they opened a Disney park in Europe.

The Walt Disney Company had experienced a big failure in the theme park business. Having successfully opened parks in the US and Asia, the idea to open one in Europe came natural. The city of Paris was chosen to host the new theme park. That was the first of many decisions that led to a very unsuccessful opening of EuroDisney.

Many factors contributed to EuroDisney’s ‘unhealthy’ performance during its first few year of activity and many of these factors could have been avoided if the proper research would have been done. The first problem with EuroDisney was that Paris was the town chosen to be this park’s home. Paris was the perfect city to build the famous park in firstly because of the demography but the wrong one when it comes to its customs and culture.

There were many marketing and operational errors that echoed into the park’s unsuccessful opening. For example, EuroDisney’s advertising had emphasized Disney’s image as an alluring bit of Americana culture rather than thinking of the French customers.

EuroDisney’s image-marketing did not explain to Europeans what the theme park was or what attractions it had to offer the European consumer. Advertising was so focused on the size of the park and the glamour behind it, that this poor marketing strategy hurt overall business.

The Walt Disney Company had taken a golden step towards Japan and driven by their first success on Asian territory considered it logical to be the same in Europe.

The first years in Europe have proved the contrary. A combination of factors contributed to a disastrous start in Paris. The biggest factor contributing to the poor performance was the failing cultural adaptation.

Disney was build and promoted in Europe as a piece of wonderful America. Everything about the park was American and cultural differences between America and Europe were completely neglected. This resulted not only in negative experiences by customers itself, but also in a heavy load of criticism from the intellectual segment of France, which traditionally didn’t have good relations with ‘Americanism’.

Besides the cultural problems, a lot of secondary factors contributed to the big failure. We must think of customers’ pockets. The price to enter the park and especially staying at the hotels, was too high in the European mindset and customers weren’t willing to spend this amount of money. As we have already explained, the French culture was not the perfect one to absorb the specific American product, as one other reason is that the English language is still unpopular in France and the American style isn’t much appreciated; in this case the cultural adaptation went wrong in almost every aspect.

The EuroDisney management team seems to have been poorly informed or have done superficial research on the European culture and market.

When Disney opened EuroDisney in Paris, the park was a symbol of American culture. The cultural adaptation that was necessary to make the park a success didn’t cross the mind of the Disney team. The problems Disney encountered when entering Europe with Disneyland were not only because of the behavior of the French, it was the neglecting of (European) culture in general that made EuroDisney a disaster.

So, concluding all the arguments: the main methodological mistake made was the choosing of the place of their park. The first and most striking mistake was not France or any specific country, but the problem was adapting to culture in general. EuroDisney’s entry strategy should have been used keeping in mind the customer and the end user of the product, in this case the ordinary Frenchman. The entry strategy should have taken into consideration all cultural aspects of their venture The strategy should be conceived after a thorough research conducted to help Disney enter the European market.

The answer to how the Walt Disney Company should market the destination to potential customers & other stakeholders is partially answered with the quote below: As a whole, a move by any company to any foreign market should not be made without an extensive, in-depth study based on exhaustive research into every applicable aspect of the economy, laws, culture, climate, interests, customs, life-style habits, geography, and work habits. This integration of differing management practices is typical with any company doing business abroad. However, a great deal of time, patience, understanding, education, and willingness to accept and/or compromise are needed from all parties involved in order to make this integration successful. 3

A new EuroDisney park would not fit in the European picture for the same reasons we discussed above: the cultural environment, language, vacation and entertainment rituals, etc. In any case, the American style and culture shown in ‘Disney’ should be narrowed down as much as possible to adapt to any of the European countries in order for it to be a success. 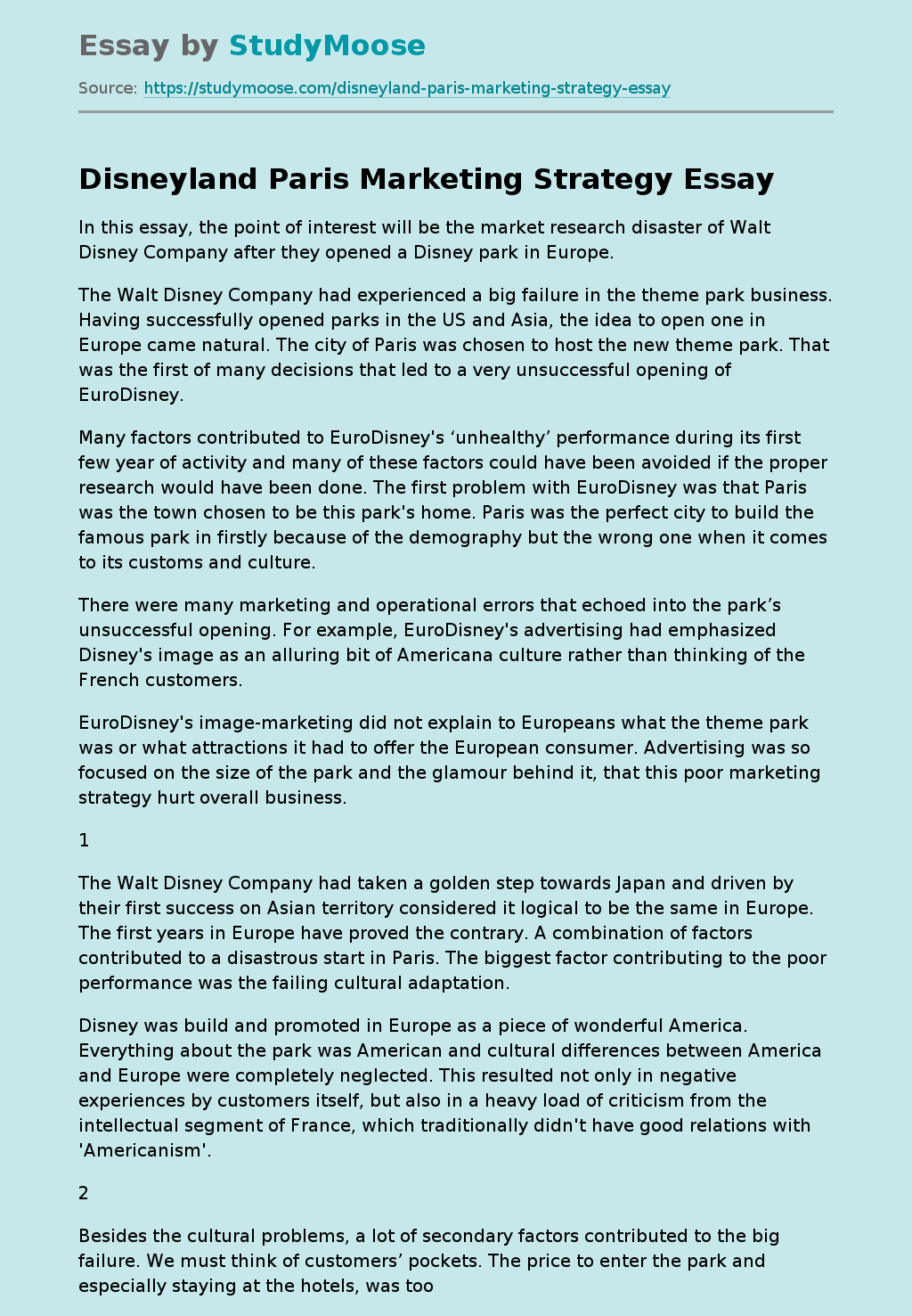