The Smile Factory: Work At Disneyland by John Van Maanen

A cursory glance of “The Smile Factory” can lead one to believe that author John Van Maanen is applying scathing criticism towards the Walt Disney Company and their amusement parks. However, such a mistaken reading would be missing what is essentially an intriguing combination of cultural anthropology and workplace sociology. By invoking the various ways by which park employees, break from the strictures imposed by the park’s design and the scrutiny of those who would enforce the park’s rules.

Don’t waste time
Get a verified expert to help you with The Smile Factory: Work At Disneyland by John Van Maanen
Hire verified expert
$35.80 for a 2-page paper

It is important to recognize that Disneyland is by nature, a land of artifice, but not in the pejorative sense of the word. Its function is to provide guests with a conflated version of American culture that is flattened down to its cheeriest aspects for the purposes of entertainment and what one Disney executive is quoted to describe as the “feeling business,” where interaction is the principle that governs the “happiness trade.”  Thus, while cultural pundits would be quick to deride employment at the park as an abject form of self-tyranny, it would be foolish to ignore the critical role which protocol plays in optimizing this happiness trade.

Disney has historically emphasized the importance by which the synergistic interaction between technology, creativity and engineering helps give rise to “fantastic worlds” and “beloved characters.” As such, primacy in the entertainment efficacy of the parks and their attractions is given to their Imagineers. The name is a portmanteau of imagination and engineering, suggesting that with the right mix of technicism and artistry, experiences in the park can be controlled for the maximum happiness.

In effect, the Imagineering way presented by the book of the same name not only obscures the influence of employee-guest interactions on the park experience but dismisses them as well.

Thus, the most noteworthy observations Van Maanen supplies is the emergent behavior which the park employees display, and the ways in which the park protocol gives rise to an internal culture that parallels youth culture, warts and all. Where Disney assumes the real culture of the park comes from the alchemical interaction of engineering and artistry to create the designed experience, Van Maanen posits that the influence of protocol and the reactions it generates are what constitute the real culture of the park.

These two perspectives reflect ideological differences on what Disney parks are all about. The Disney Company, by emphasizing the importance of its Imagineers, valorizes the role by which technicism can distill art into a science, much like fast food made food service into a technical discipline. Van Maanen on the other hand, suggests symbolic interaction and role playing within the park premises governs the park experience. These two distinct cultural points of view are expected since they also arise from the level by which Disney is examined as an organization in relation to its amusement parks.

Effectively speaking, what one identifies as the “culture” of Disney parks varies whether it is seen top-down from the perspective of Imagineering-as-management or bottom-up from the perspective of how the behavioral makeup of employees influences the park as a whole. There is value in the disparity between these perspectives. Whether the former or the latter presents the ‘real’ culture – if there even is one – of Disney is a moot point compared to the semiotic interaction of these two forces on the parks.

Regardless, I would have little interest in seeking employment at the parks. This has little to do with the relative lack of glamour in the park service and more to do with my distaste for certain aspects of the park sociology depicted by Van Maanen. Van Maanen (61-65) notes that there is a pecking order to assignments and stations within the Disney parks. For example, service crew is regarded lowly compared to the tour guides. He also observes that while this social pecking order parallels the trademarks of youth culture, it is often dissonant with realities outside of the park and it is a cultural dissonance I have no interest in being a part of. 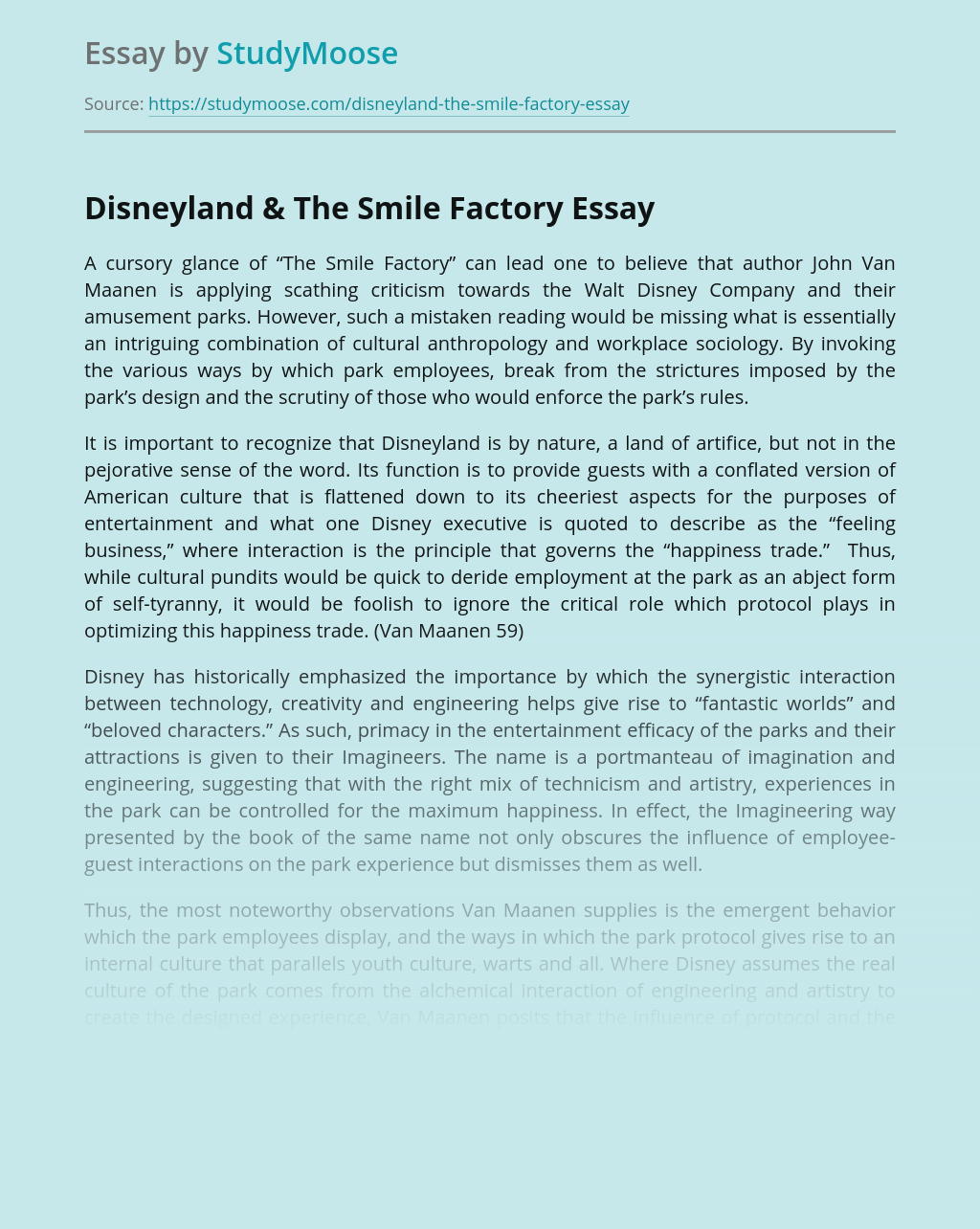 Don’t waste time
Get a verified expert to help you with The Smile Factory: Work At Disneyland by John Van Maanen
Hire verified expert
$35.80 for a 2-page paper
Stay Safe, Stay Original