Discuss what Lady Macbeth’s persuasive language in 1.7 reveals to the audience about her character

Discuss what Lady Macbeth’s persuasive language in 1.7 reveals to the audience about her character & relationship with her husband

In Shakespeare’s Macbeth, he portrays Lady Macbeth as a strong female character whom is equal to Macbeth and sometimes even stronger than Macbeth which was unusual for the time as at the time, men were considered to be above women as they believed in the divine order of the universe which stated that men came before woman and that women should only be there to serve men and obey their husband and their father and not question their husband’s decision.

Don't use plagiarized sources. Get your custom essay on
“ Discuss what Lady Macbeth’s persuasive language in 1.7 reveals to the audience about her character ”
Get custom paper
NEW! smart matching with writer

In Scene 1.7, Shakespeare uses Lady Macbeth’s language and sexual parts to persuade her husband into killing Duncan so that she can become Queen. She even goes as far as question Macbeth’s manhood.

One of the quotes which supports my point is ,”We fail? But screw your courage to the sticking-place, and we’ll not fail.” which Lady Macbeth said to Macbeth after he questioned him and not obeying him.

She used a rhetorical question which is seen in the above quote to scould him as would a child which is going against all of the things that a wife should be at that time and she is talking to him like a child when she tells him to get his courage up and reassures him that they will not fail which is all influenced by the rhetorical question. She also questions his manhood in the quote,”When durst do it, then you were a man,” by scolding him and saying that he is not a man now as he didn’t dare to do it and this has made him more feminine which is a great insult to give someone in Shakespearean times, which proves my point that Lady Macbeth does not want to give up and she f ft ff people into doing whatever she wants him to do.

I believe that this quote is one of the strongest quotes which proves my opening point. Another quote which I believe proves my opening point is,”What beast was’t then, that made you break this enterprise to me? When you durst do i t, then you were a man.” This states that Lady Macbeth is hurt as Macbeth broke a promise to her. She uses repetition in the quote and she repeats the word ‘you’ which you could infer as making an accusation against Macbeth or you could infer that she is honestly hurt by Macbeth as she expresses hurt by her use of language in this quote. In this quote she also uses a rhetorical question which you could infer that she is so hurt and angry, she does not want him to answer the question and she ends with a very strong insult which a “loving” wife would never make to her husband, especially in the Shakespearean times.

She further evaluates the importance of a promise to her in the quote, “know how tender tis’ to love the babe that milks me. I would, while it was smiling at my face, have plucked my nipple from his boneless gums and dashed the brains out, had I sworn as you have done this.” This quote proves that Lady Macbeth would do anything if it would uphold her promise even if it would mean killing her own child to uphold a promise. This quote also shows how truly hurt Lady Macbeth is and how angry and how fearful she is and her dertermination to get what she wants. This is quite masculine of her but I will cover more on that after this.

A quote which shows how devious and courageous Lady Macbeth is, “Who dares receive it other , as we shall make our griefs and clamour roar upon his death?” This quote proves that Lady Macbeth is doing whatever she can to get what she wants. She uses persuasive language such as ‘dares’ which is a very strong word as it involves taking a risk and a risk which could ultimately stab you in the back. This quote also shows Lady Macbeth putting on a false face and pretending to grief and mourn for the King’s loss however in actual fact, it was her which set up the King to be killed. This shows that Lady Macbeth will be decisive and manipulate whoever she wants to get what she desires. A quote which I have mentioned before but I want to go more into detail is, “know how tender tis’ to love the babe that milks me. I would, while it was smiling at my face, have plucked my nipple from his boneless gums and dashed the brains out, had I sworn as you have done this.”

I strongly believe that this is the quote which really well establishes Lady Macbeth is a brutal and a character which will do anything to get what she most desires and not to care about anything or anyone else, just to get on top. This quote portrays Lady Macbeth as a mother which is a role which you need to care only about the baby and nurture the baby and bring it up as your own. This quote mentions that Lady Macbeth knows what it is like to breastfeed a baby but the play has not mentioned anything about Lady Macbeth and a baby, but I will get to that in further detail in my conclusion. This quote also mentions her killing the baby in the most brutal way: when it is it’s most vulnerable. During a breastfeeding.

This shows that Lady Macbeth will do anything to keep a promise and you could infer that because of her incredibly detailed description, that she has done this before. One more quote which I believe solidifies my first point is, “And live a coward in thine own esteem, letting “I dare not” wait upon “I would” like the poor cat i’th’ adage? ” This quote shows that Lady Macbeth is angry and full of adrenaline which really provokes her use of language in this quote by calling her husband a coward for backing out of his commitment and letting him live in the shame of not doing his deed which also interrupts the divine order and being a good wife in the Shakespearean times. She defies all this when she does not listen to her husband and takes on the role of the husband in the relationship in this quote and in this whole scene.

In conclusion, I believe that Lady Macbeth is full of anger, grief and betrayal as she confronts Macbeth in this scene by saying that he is not a man and by calling him a coward and informing or reminding him of what she would do if she promised him. She would even go as far as killing her own child if that is what she has promised which means that she has built up a lot of trust in this relationship and she does not want to lose it now. By saying she knows how it feels to love a baby who she has breastfeed could imply that she and Macbeth had a baby and it died or it got murdered.

If it got murdered or it got killed because of a promise she made, which she has proven is the most important thing to her, probably fuels her anger and hurt in this scene which makes this scene make so much sense that it is my final implied conclusion. The reason that I have inferred is that Lady Macbeth is so passionate and angry in this scene is because she had a baby and it died because of a promise she made which is why she made such an important and a significant reference to this is because this happened to her and she does not want it to happen again.

Discuss what Lady Macbeth’s persuasive language in 1.7 reveals to the audience about her character. (2017, Nov 06). Retrieved from http://studymoose.com/discuss-what-lady-macbeths-persuasive-language-in-1-7-reveals-to-the-audience-about-her-character-essay 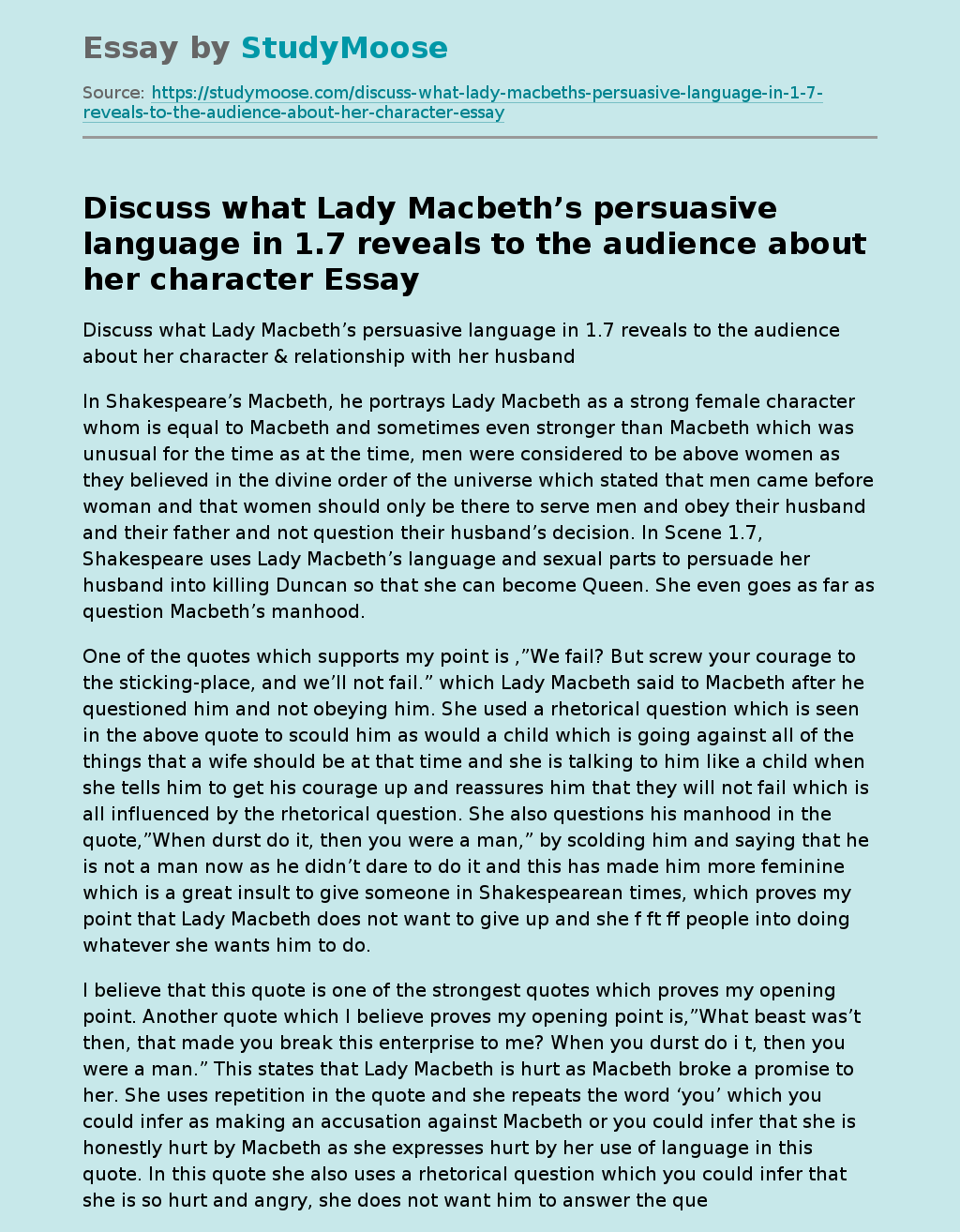