Her body, her baby, her choice

Abortion, it’s not a choice that any woman would ever want to have to make, but it’s a decision that she should have the right to make. If it comes down to the possibility of her and her baby losing their lives, she should be able to stop this possibly fatal pregnancy. The body is hers, the baby is hers, and the choice should be hers. If you disagree, make the choice for your own body. Abortion should be legal.

Don't use plagiarized sources. Get your custom essay on
“ Her body, her baby, her choice ”
Get custom paper
NEW! smart matching with writer

What people may not realize is that, legal or not, abortion still happens all around the world.

Of the approximately 42 million abortions that do occur worldwide, almost half are performed by unskilled individuals, in environments that do not meet minimum medical standards or both. ” (http://www. guttmacher. org/pubs/gpr/12/4/gpr120402. html). Unsafe and illegal abortion is responsible for one in eight maternal deaths and according to an estimate done by the World Health Organization in 2006 ‘back alley’ abortions cause about 68,000 deaths each year where abortion isn’t legal.

Proficient in: Against abortion

There is no question that making abortion illegal in places such as the United States, will only make these numbers increase greatly.

It’s no secret that raising a child requires mass amounts of money that many women who get pregnant don’t have, especially if they have no partner to help them out. Poor and low income women account for more than half of abortions in the United States. Without the option to get an abortion, there would be many more children suffering because they have to live their life in poverty.

Almost half of all children with a single mother live in poverty, these children experience poverty at a rate that is more than four times higher than kids in married-couple families.

Although, it is believed that “abortion legalization may have led to an improvement in the average living conditions of children, probably by reducing the numbers of youngsters who would have lived in single-parent families, lived in poverty, received welfare and died as infants. ” (https://www. guttmacher. org/pubs/journals/3402502. html) Many people who are against abortion don’t take into consideration that not all women are able to safely give birth to a child and the risk of death associated with childbirth is about 10 times as high as the risk of death associated with abortion.

For example, teen girls aged around 15-19 years old have bodies that are not yet ready for childbirth. These girls are five times more likely to die, with around 70,000 of them dying annually. Their babies that do survive still have a 60% higher chance of dying than normal babies. With so much uncertainty, why shouldn’t they have the option to prevent themselves and their own parents the pain of losing a child. Many people believe that women are using abortion as a form of birth control.

Making abortion illegal forces women who may have taken many precautions to not become pregnant to have a child that they don’t want and makes it so that an unwanted child is born into this world. This would not be fair to the woman or the child. Something that many people who oppose to abortion believe is that abortion, spontaneous or induced, raises the risk of breast cancer or any other type of cancer. There have been many, many studies done studies by various people such as the National Registry of Induced Abortions, the Danish Cancer Registry, Harvard researchers, and The California Teachers Study.

The large size of most of the studies and the manner in which they were done provide good evidence that induced labor does not affect a woman’s risk of developing breast cancer. In 2003, the U. S. National Cancer Institute had a workshop with more than 100 of the world’s leading experts who study pregnancy and breast cancer risk. They all found that neither induced or spontaneous abortion are linked to an increase in breast cancer risk; the level of scientific evidence for these findings was considered the highest level, ‘well established’.

Abortion should be legal because it saves many women’s lives from unsafe abortion, it can save families from lifelong poverty and it may save the lives of women who are unable to safely give birth to children. In a country that is based on freedom; freedom of speech, freedom of religion, individual freedom, why should this situation be any different? A law based off of a religious belief isn’t something that this country stands for, a law that prevents women from making decisions about her own body should not be a law in this country.

Her body, her baby, her choice. (2018, Aug 26). Retrieved from https://studymoose.com/her-body-her-baby-her-choice-essay 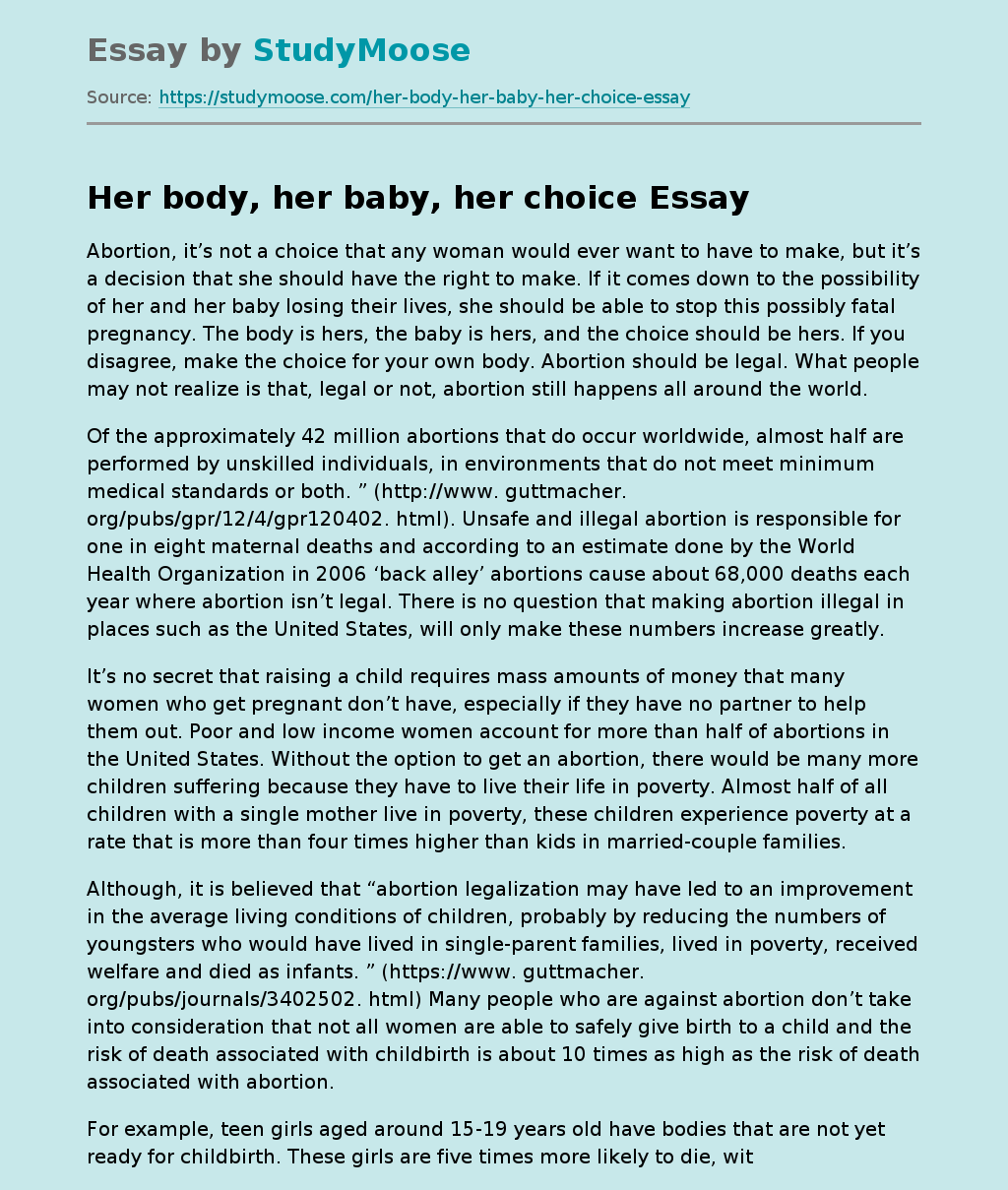