Discuss the Differences Between Beatrice and Hero

Shakespeare’s play ? Much Ado about Nothing’ has two main female characters, Beatrice and Hero, who are cousins. Both appear to be completely different in the beginning of the play but, as things progress and their characters develop, there are also some very obvious similarities between them. Hero and Beatrice have a very close relationship; they are best friends. Leonato is Hero’s father but Beatrice has no parents, which gives her greater freedom. Where Hero is polite, quiet, respectful and gentle, Beatrice is feisty, cynical, witty, and sharp.

Don’t waste time
Get a verified writer to help you with Discuss the Differences Between Beatrice and Hero
Hire verified writer
$35.80 for a 2-page paper

Shakespeare uses quite a lot of literary devices and techniques to present the characters of Hero and Beatrice in a way that lets the audience easily compare and contrast them. For example, in the characterisation of Hero and Beatrice, the dialogue used ? what they say, how they say it, what other characters say about them and Hero’s silence are all very important in revealing their characters; in a similar way, their actions ? what the characters do, and their inaction contrasts and creates significant difference between them, bringing each one’s personality.

In addition, Shakespeare’s constant use of dramatic irony, exaggeration and contrasting plots, themes and structure all combine in his presentation of the two. At the start of the play Hero is presented as a typical woman of the time, modest and demure ? she says little. In fact, Shakespeare’s first words describing Hero, ?

Is she not a modest young lady’ announce her essential qualities of modesty and decorum. In this period, these were vital qualities to have in a wife and Hero possessed them, unlike Beatrice.

By contrast, Shakespeare portrays Beatrice as an untypical woman, being outspoken, independent, witty and unconventional ?she is always participating in the conversation even with the men (especially Benedick), which Hero never does.

A prime example of this in Act 1 is when Beatrice asks the messenger about Benedick, (a lord, and soldier from Padua) in an offensive way: “I pray you, is Signor Mountanto returned from the wars or no? ” This is part of her “merry war” with Benedick. Beatrice appears to loathe Benedick and vice versa; they engage in many “skirmishes of wit. ” However, although Beatrice appears hardened and sharp, she is vulnerable, for she loves Benedick.

She is disguising her feelings for Benedick by calling him names and disguise is a major theme in this play. Beatrice’s vulnerability is an important point of comparison with Hero, as she is also vulnerable, as we see later in the play. In contrast to her talkative cousin, Hero speaks only once in Act 1 ? in the presence of Beatrice, her father and the messenger, “My cousin means Signor Benedick of Padua” she says, to explain Beatrice’s jibe. Similarly, in comparing wooing, wedding and repenting to three types of dancing Beatrice describes them as a “Scotch jig, a measure, and a cinquepace.

” This dance image is an inventive one and dance, music, and song are key themes in this play. Here Shakespeare is using an extended metaphor to portray Beatrice’s anti-matrimonial feelings. Of course, these feelings are not genuine. As we see throughout, disguise is one of the key themes in the play and Shakespeare makes it clear that Beatrice is disguising her true feelings, for she admits to Don Pedro that Benedick once “lent her his heart awhile but won her heart with false dice”. She and Benedick obviously have had a relationship in the past ? one that they would both like to resume.

In Act 3, in the absence of men, Shakespeare develops Hero’s character. She is decisive in Scene One and commanding, “Good Margaret, run thee to the parlour” she orders. We witness a development in Hero’s character; she is dominant and authoritative; she initiates and organises the plot to gull Beatrice, the second benevolent plot in the play. For the first time in the play, Shakespeare also provides Hero with a poetic image, “Forbid the sun to enter ? like favourites, Made proud princes that advance their pride. ” And we see that Hero is clever enough to denigrate Beatrice, “Of the false sweet bait that we lay for it.

” in order to make Beatrice believe that they do not know she’s listening, otherwise they would not discuss her faults. Although Beatrice is intelligent, Shakespeare makes her gullible when she overhears Hero and Ursula discussing Benedick and Beatrice’s relationship. We see that Beatrice does have a softer side, “Benedick, love on; I will requite thee, Taming my wild heart to thy loving hand. ” Enhancing the romance in the play and signifying a transformation in Beatrice. Indeed by the end of Act 3 scene 1, Beatrice and Hero are showing certain similarities.

They are now both in love and as we see in Act 3 Scene 4, Beatrice has become quieter and more serious. During the scene of the morning of Hero’s wedding, Shakespeare reveals that Hero is having premonitions, more development of her character. “God give me joy to wear it for my heart is exceedingly heavy” she states. This is dramatic irony because she feels the wedding may go wrong but it is really a reminder to the audience of Claudio’s intentions to humiliate Hero in the next scene. The audience also find out that Beatrice is lovesick, Hero asks: “Do you speak in the sick tune?

” Beatrice is subdued and Margaret also fills in the comic space and provides the wit by making jokes at Beatrice’s expense. “God send everyone their heart’s desire! ” she says, implying she knows what Beatrice’s heart desires. Margaret makes obscure references to Beatrice’s new mood, saying she should take some “Carduus Benedictus” for her illness. Shakespeare has developed contrasts between Hero and Beatrice in the way that their relationship with men is presented, particularly the men that they love. Hero and Claudio are the sweet innocent “young lovers. ” Their marriage is arranged by the Prince and Leonato and Claudio is given Hero.

They develop in interesting ways and they represent two extremely different views of society and what it was like to be a woman in those patriarchal times. Personally, I find Beatrice the more interesting character of the two women; she is more active and has a fuller character which lets you speculate about her whereas this isn’t possible with Hero because her character is so bland. Beatrice’s character is also more entertaining and she stimulates feelings out of the reader, making you like or dislike her and the way she acts and again this isn’t as possible for Hero because her character is so featureless.

Discuss the Differences Between Beatrice and Hero. (2016, Sep 16). Retrieved from http://studymoose.com/discuss-the-differences-between-beatrice-and-hero-essay 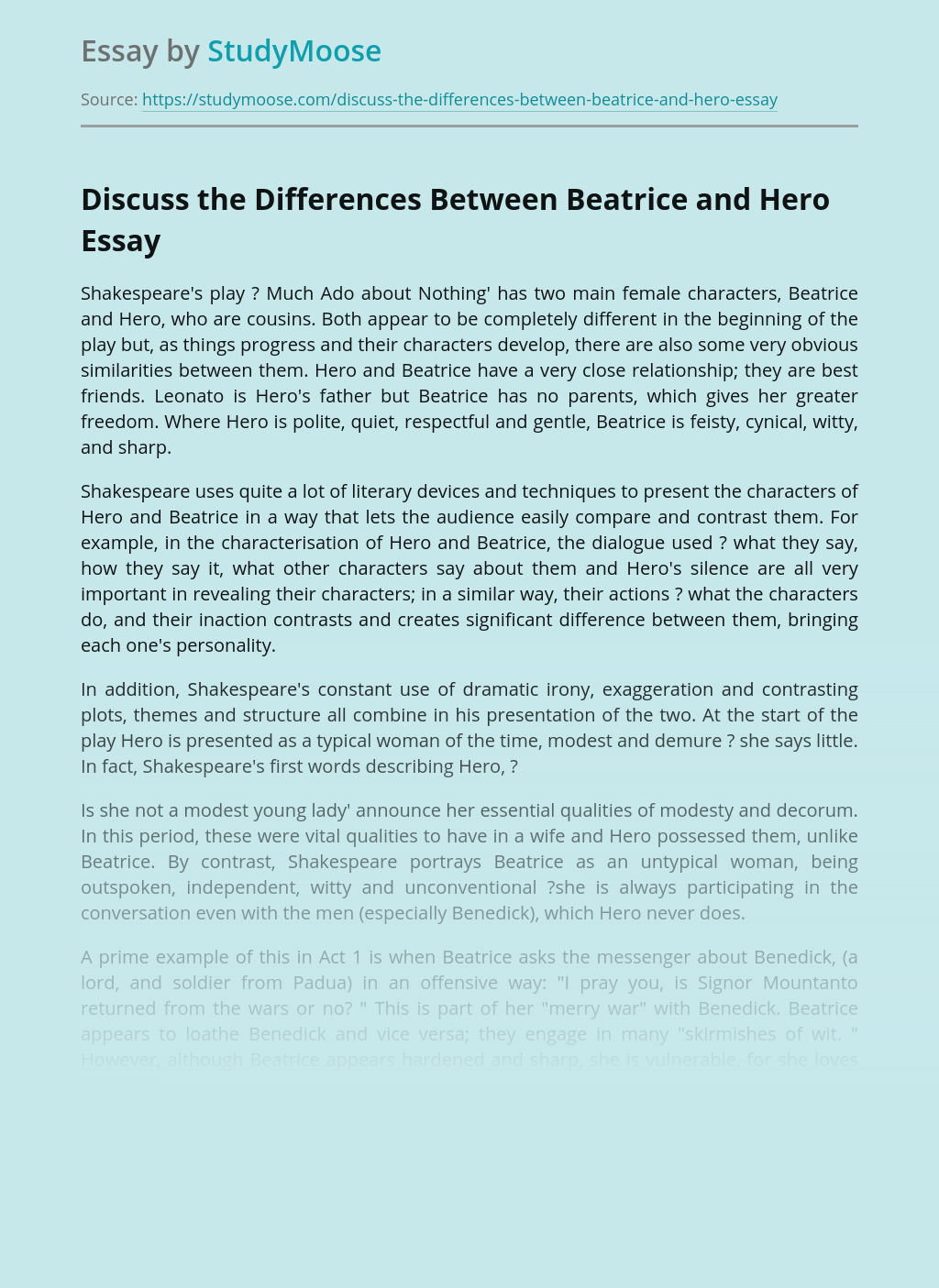 Don’t waste time
Get a verified writer to help you with Discuss the Differences Between Beatrice and Hero
Hire verified writer
$35.80 for a 2-page paper
Stay Safe, Stay Original