Discuss Hamlet's attitude to death and the afterlife

Discuss Hamlet’s attitude to death and the afterlife, giving an indication as to how both contemporary audience and modern audiences might view it. “Hamlet” deals with situations, which require a single-minded response. However, by the end of the twentieth century a large percentage of people were unfamiliar with church worship and words of the bible, which makes modern interpretation of it much more difficult which Elizabethan and Jacobean audience of Shakespeare’s time on the other hand had strong beliefs in religion, includes specifically the afterlife.

Don't use plagiarized sources. Get your custom essay on
“ Discuss Hamlet’s attitude to death and the afterlife ”
Get custom paper
NEW! smart matching with writer

Hamlet shares the views of the contemporary audience and we must therefore try to understand his religious perspectives in the way that contemporary audiences would have done. To the modern audience the religious ideas and beliefs of Hamlet may seem strange 1 “There is never an ideal production of Hamlet; any interpretation must limit. For our decade I think the play will be about the disillusionment which produces apathy of the will so deep that commitment to politics, to religion or to life is impossible… Hamlet is always on the brink of action, but something inside him stops the final committed action.

It is an emotion which can encounter in the youth today. ” I agree with this statement but I think that it is Hamlet’s conscience that holds him back from killing Claudius rather than mere disillusionment. For the Shakespearean audience, a religious theme would have been established at the very beginning of “Hamlet” when the ghost fades “on the crowing of the clock” and Marcellus says: “Some say that ever ‘gainst that season comes Wherin our Savior’s birth is celebrated, This bird of dawning singeth all night long: And then, they say, no spirit dare stir abroad.

The nights are wholesome, then no planets strike, No fairy takes, nor witch hath power to charm, So hallow’d and so gracious is that time” No spirits are allowed to walk the earth in the day. “The Crowing of the cock” could also be a religious reference to St Peter’s denial of Christ before the crucifixion, all of which would have been readily understood by a less secular audience than a modern one. When Laertes discovers that Hamlet killed his father, Polonius, his reaction is in complete contrast to Hamlet’s when he discovers what happened to his father.

Laertes is prepared to go to Hell to avenge his father’s death and is more concerned about getting his revenge than what happens to him. The final result of Laertes’ decisiveness is the death of Hamlet. Laertes gets his revenge, but at great cost. In a traditional revenge tragedy the search for revenge would predominantly lie with the hero of the play. However, Shakespeare makes Hamlet very aware of the consequences of his actions, which is why this is not the typical revenge tragedy that Jacobean audiences were familiar with.

This is because Shakespeare wanted to show that Hamlet has a morality that rises above vengeance. Laertes takes on the role of the character who demands vengeance regardless of the consequences. Hamlet, as I have already suggested, is very much a thinker and considers the consequences of his actions. He procrastinates about taking revenge throughout the play and ironically it is Claudius who suggests the fencing match and the poisoned wine, which ultimately allows Hamlet to honour the Ghosts wishes and kill Claudius.

When Hamlet’s father’s ghost first appears to him, he wonders whether or not to accept it at face value. This is because Shakespeare has acknowledged the church belief that no soul could ever return from the grave so all in reality were evil spirits or devils who are attempting to entrap mortals into their power. On first seeing the ghost Hamlet says: “Angels and ministers of grace defend us! Be thou a spirit of health or goblin damn’d, Bring with thee airs from heaven or blasts from hell, Be thy intents wicked or charitable, Thou com’st in such questionable shape That I will speak to thee. I’ll call thee Hamlet… “

Discuss Hamlet's attitude to death and the afterlife. (2017, Jul 27). Retrieved from https://studymoose.com/discuss-hamlets-attitude-to-death-and-the-afterlife-essay 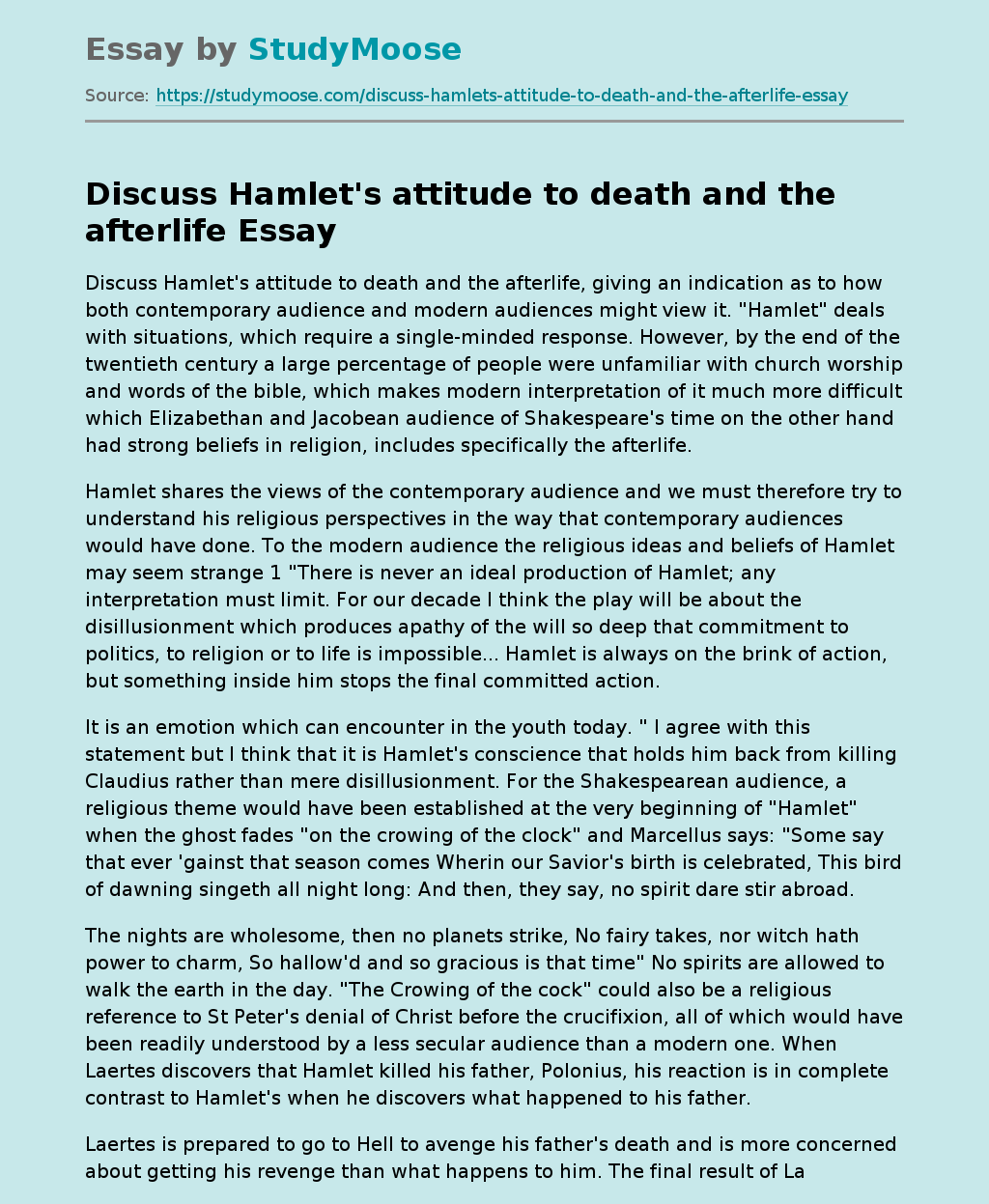