Disadvantages of Large Population of a Country in Relation to Development

“Overpopulation is a curse to the society’s overall growth. Several countries facing this problem are trying to control their population growth. India, for example, has been introducing family planning programs to curtail the growth of its population.”

Population growth in a country using a capitalist economic system means more demand for products and therefore economic growth. For a country with a low population and a lot of land, it can be an advantage especially if the distribution of wealth remains close to level so everybody can prosper.

Turn in your highest-quality paper
Get a qualified writer to help you with
“ Disadvantages of Large Population of a Country in Relation to Development ”
Get high-quality paper
NEW! AI matching with writer

That’s not a long term solution for the planet however.

The disadvantage is that population growth puts tremendous pressure on economic and ecological resources. In the long term, the world will have to come to terms with the fact that we are consuming at a faster rate than nature is able to produce right now. The consequences of not making an adjustment in an orderly manner will not be a pretty sight.

Some of the underdeveloped and developing countries face the problem of over population. Too many mouths to feed and fewer natural resources on hand can have a devastating effect on the economy. Countries like India and China have large population. In India, population growth has been on a higher scale than what the country’s economy can handle. The prosperity of a nation depends upon the standard of living of its people. Developed countries, such as the US with less population provide a better standard of living for their people.

The Americans have good food to eat, enjoy a luxurious living as compared to the people belonging to South-East Asia. What are the disadvantages of overpopulation one may ask?

Depletion of Natural Resources: The effects of overpopulation are quite severe. The first of these is the depletion of resources. The Earth can only produce a limited amount of water and food, which is falling short of the current needs. Most of the environmental damage being seen in the last fifty odd years is because of the growing number of people on the planet. They are cutting down forests, hunting wildlife in a reckless manner, causing pollution and creating a host of problems. Those engaged in talking about overpopulation have noticed that acts of violence and aggression outside of a war zone have increased tremendously while competing for resources.

Degradation of Environment: With the overuse of coal, oil and natural gas, it has started producing some serious effects on our environment. Rise in the number of vehicles and industries have badly affected the quality of air. Rise in amount of CO2 emissions leads to global warming. Melting of polar ice caps, changing climate patterns, rise in sea level are few of the consequences that we might we have to face due to environment pollution.

Conflicts and Wars: Overpopulation in developing countries puts a major strain on the resources it should be utilizing for development. Conflicts over water are becoming a source of tension between countries, which would result in wars. It causes more diseases to spread and makes them harder to control. Starvation is a huge issue facing the world and the mortality rate for children is being fuelled by it. Poverty is the biggest hallmark we see when talking about overpopulation. All of this will only become worse if solutions are not sought out for the factors affecting our population. We can no longer prevent it, but there are ways to control it.

Rise in Unemployment: When a country becomes overpopulated, it gives rise to unemployment as there fewer jobs to support large number of people. Rise in unemployment gives rise to crime as people will steal various items to feed their family and provide them basic amenities of life.

High Cost of Living: As difference between demand and supply continues to expand due to overpopulation, it raises the prices of various commodities including food, shelter and healthcare. This means that people have to pay more to survive and feed their families.

Top 20 thought provoking effects of over population
1.More mouths to feed.
2.Lower standard of living.
3.Poverty.
4.Overcrowded cities.
5.Sickness and spreading of diseases.
6.Insufficient natural resources to provide adequate goods and services.
7.Inadequate facilities, such as housing, medical etc.
8.Problem of starvation and malnourished population.
9.Education facilities may not meet the requirements of the entire population.
10.Unemployment.
11.Higher crime rate due to unequal distribution of wealth and insufficient financial resources.
12.Environmental pollution. Trees are felled to make space for housing facilities.
13.Agricultural production is insufficient to meet the requirements of the entire population, which results in higher prices.
14.Money is diverted to ensure that the population is fed, rather than carrying out fundamental research. 15.Lower life expectancy.
16.People living in rural areas are not provided with employment opportunities.
17.Large number of people lives in unhygienic conditions.
18.Birth rate is high.
19.Due to lack of proper medical facilities death is also very high. People succumb to various diseases.
20.Child labor is common. To sustain themselves families force their children to work, rather than send them to school.

Disadvantages of Large Population of a Country in Relation to Development. (2016, Mar 27). Retrieved from https://studymoose.com/disadvantages-of-large-population-of-a-country-in-relation-to-development-essay 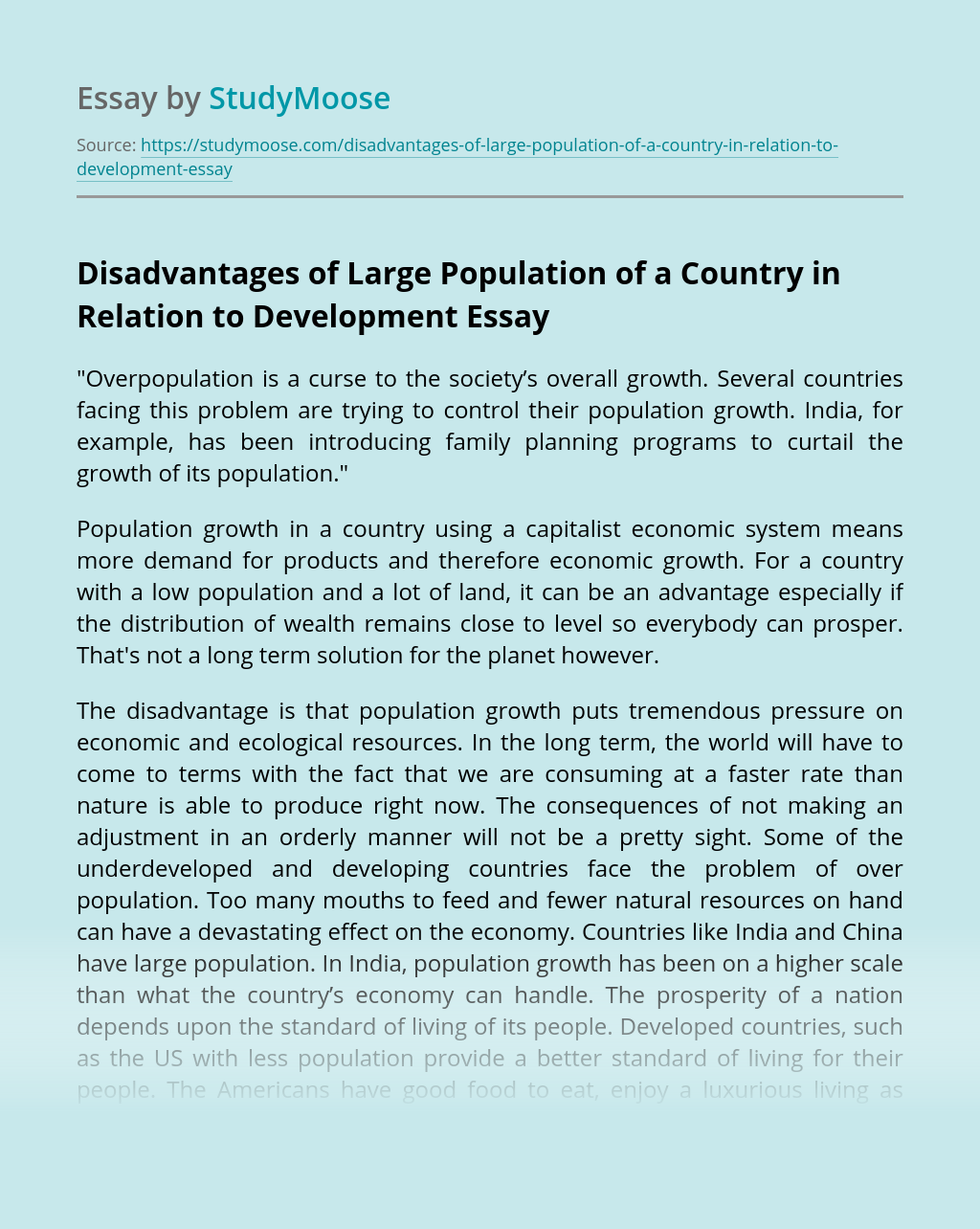 Turn in your highest-quality paper
Get a qualified writer to help you with
“ Disadvantages of Large Population of a Country in Relation to Development ”
Get high-quality paper
Helping students since 2015
Stay Safe, Stay Original