Dignity of Labour: “Shouldn’t an honest and descent job be enough? ” “Work is work”; no work is superior or lower in itself. It is absolutely wrong to consider any work as high or low. The work itself is a dignity and every work has some dignity attached to it. The meaning of dignity of labour every kind of work is dignified. It also implies that dignity can be achieved only by hard work. All types of jobs are respected equally, and no occupation is considered superior.

Don't use plagiarized sources. Get your custom essay on
“ Dignity of Labour ”
Get custom paper
NEW! smart matching with writer

Dignity of labour indicates that you respect all types of jobs equally and don’t feel that one job is greater than another.

It is the most essential thing we all should develop, with reference to the growing problem of unemployment it is better being employed in something than remaining idle. As example we can just see; Southern Asia, Middle East country or our rich family, a housewife would sit idle and waste time, a domestic servant to do all the household works like cooking, cleaning, washing, child and other domestic works.

Proficient in: All Work Is Dignified

Not only that, a wealthy mother would consider it not in keeping with her dignity and self-respect even to look after her own child. She would engage a nurse and entrust the child to her cure.

Because she has thinks it below her dignity to work in the kitchen or to attend to other domestic work. She would consider it a status symbol to engage a housemaid to cook for her. She would not mind spending money on.

The work of a sweeper is as high, important and dignified as that of a doctor, engineer or teacher. This fake concept is the result of manmade difference between one kind of work and another. As a matter of fact work is work and it cannot be classified as high or low. This aversion to manual work has done great harm to our country. This has created an artificial division in the society.

One of the important causes of the present problem of large scale educated unemployment is this spirit of aversion to manual labour. If we look towards other countries in the world, we would find that the countries which have aversion to manual labour have remained undeveloped and poor. As against this the countries where people love to do manual work have made impressive progress. Who decides which work is better? Who decides which work deserves respect? The definition of dignity of labour is no work should be looked on upon. No one should be treated with any less respect just because of the work they do.

Every work is respectable, dignified and important. There is nothing wrong in the nature of any work; what is important is how one looks at it and does it Everyone is equal in the eyes of law, the government and the country. The answer for all of the above is that we have to respect every form of work and thus the solution to all of this is Dignity of Labour. Respect people who work, as this will help to increase employment, but also provide the basis for a healthy society. People didn’t think that any work is big or small or they didn’t do that. By doing so they would be doing a great service to themselves, their society and country. 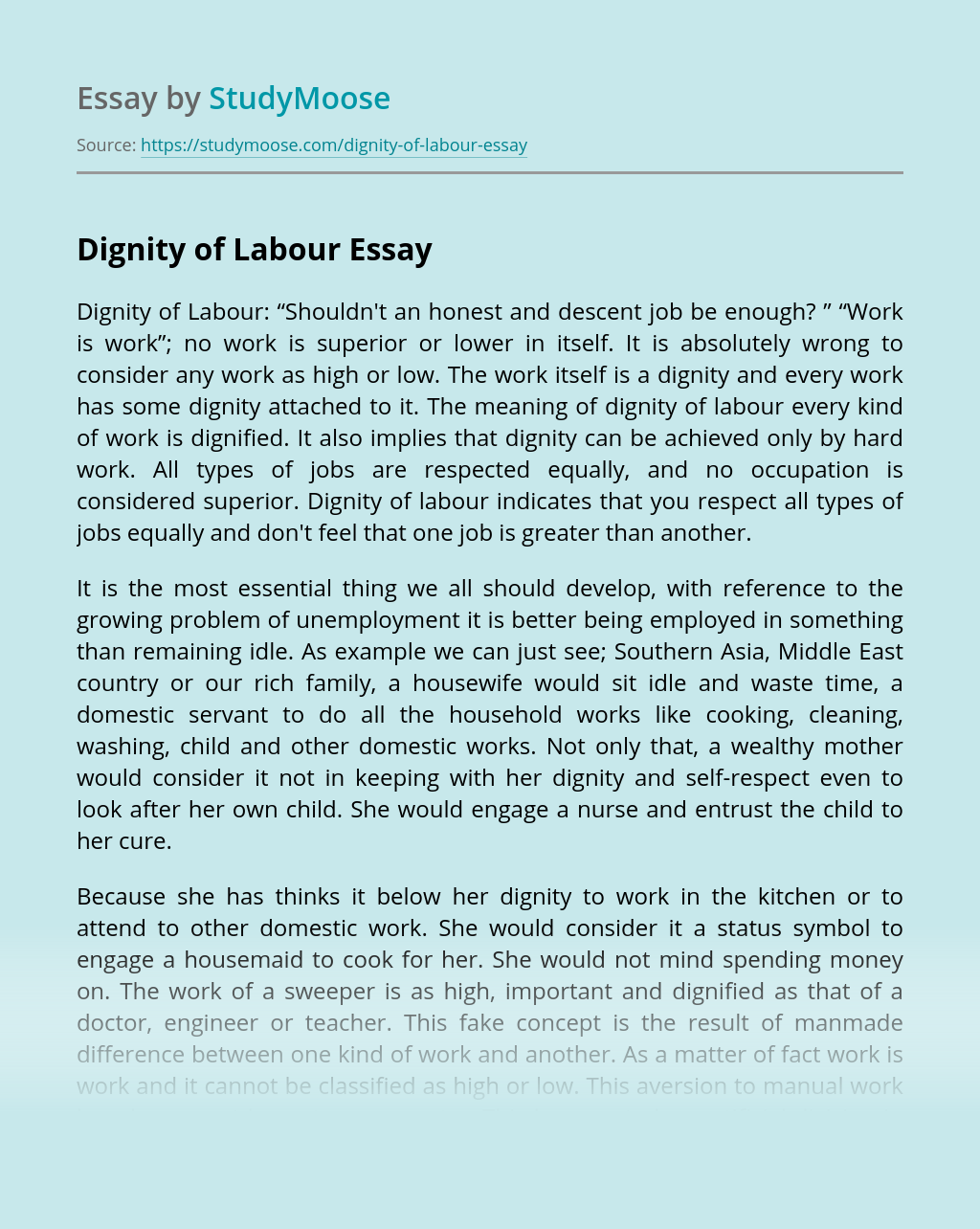