Write a diary entry or entry’s as if you are Helen Stoner. Review the cases and recount how Holmes solved it. Focus on an appropriate style. Diary entry for Helen Stoner I can not tell you how relieved I feel to be finally in my aunt’s cosy house! I would be most contented to have a good nights rest, but before I do I would like to note down the events that occurred today. This day was a day to remember as it will have an effect on me, in many ways for the rest of my wretched life.

Don't use plagiarized sources.
Get Your Custom Essay on Diary entry for Helen Stoner Just from $13,9/Page

It all started when I got up at the break of dawn and travelled all the way into town to see Sherlock Holmes in Bakers Street.

I was taken aback as to why such a remarkable detective like Sherlock would even consider seeing me. Even more so, Sherlock gave me quite a fright when he told me what time I departed home and how I travelled to Bakers Street.

However, it just proved to me how observant Sherlock is, which made me feel safe in leaving the mystery of my sister’s fate in his hands. I had to relive that tragic night, (two years ago from now) of my dear sister’s fate and the events before and after that had occurred, in order to give as much detail as possible to Mr Holmes.

I was absolutely thrilled when Sherlock Holmes assured me he would do all he could to solve the mystery of beloved Julia’s death. Sherlock had then skilfully noticed, under my frill of lace reviled marks of four fingers and a thumb on my wrist. This was from the night before when my stepfather (DR Roylott) had become angry and given me a firm hand. I did not wish to tell Sherlock about this as I was scared of the consequences if my stepfather had found that I had visited Sherlock Holmes. After all DR Roylott barely knows his own strength.

I felt so lightened after talking to Holmes about my troubles, as he was the first person I have ever told about those horrifying events. Later that day when I met up with Holmes, I then discovered Sherlock had crossed paths with my stepfather after I had left. I instantly felt as though my life had crumbled before my eyes. I was now unsure weather to go ahead with the mystery. However it was too late to change my mind now, Sherlock was already fall steam ahead and investigated all of the Moran, as anticipated. Later that day I discovered many secrets that I had never thought about in depth.

Holmes had shown me a small ventilator that was in my sister’s room and lead to my stepfather’s room. The bell pull in my sister’s room was indeed a dummy and he also cunningly observed that there was no logical reason whatsoever for me to have been moved into my sisters room, as there were no ‘repairs’ that needed seeing to in my own room. The bed was strangely clamped to the floor as Sherlock had pointed out. All of this information didn’t make sense to me. My mind was buzzing with so many possibilities but my main focus was clearly to find out the cause of my sister’s death.

Holmes is a remarkable man, but sometimes gave me doubts on things when asked the question does your stepfather keep a cat in the safe? How peculiar that must have sounded! When Sherlock Holmes had finished inspecting every room top to bottom for the slightest thing out of place, to my horror he told me my very life depended upon my obedience of him. As you may have guessed, I felt very fearful and anxious of what clues he had found that made him say such a thing. Holmes requested to spend a night in my sister’s room while I was to still stay in my original room.

Dr.Watson, Holmes and I, had agreed that when my stepfather had retired to his chamber for the night I was to give them a signal from my sister’s room that all was okay to carry on as planned. This I did and I then slipped back into my own room. I spent all night tossing and turning under the security of my bed covers. Plenty of thoughts were whizzing around my head, too many to sleep upon. I pleaded that my stepfather would not awake and see to a noise, as he would be most dismayed with what he would have seen. When finally getting to sleep, I awoke not long after to hear the sound of something striking my sister’s wall.

I heard the most ghastly shriek through the night, just like the one my sister had described the night before her death. I was so panic-stricken all I wanted to do was to run and get help from someone. My heart was telling me where to go, despite this I stayed put, just as Holmes had strictly told me. Show preview only The above preview is unformatted text This student written piece of work is one of many that can be found in our GCSE Arthur Conan Doyle section. 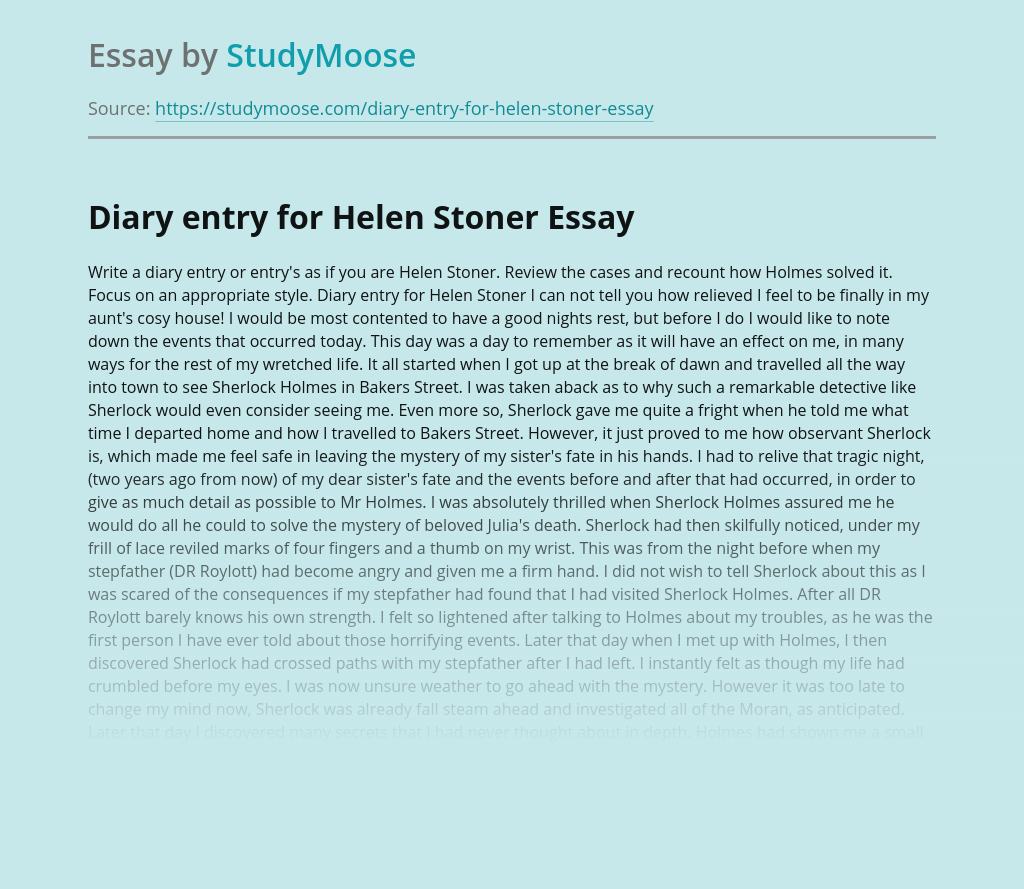 In this essay I’ am going to compare & contrast two detective stories. A pre-twentieth century story by Sir Arthur Conan Doyle called ‘The Speckled Band’ & a modern story by Colin Dexter called Neighbourhood Watch. I will describe the language, characters, social and historical context, Style, the plot, similarities and differences between the two....

Ender represents the best picture of leadership. He is dedicated to learning, to doing well, is innovative, comprehends everything he sets his mind to, has strong self-awareness, has strong group dynamics-awareness, understands power dynamics, and is understanding and compassionate towards those he leads. He understands that he has to sometimes do things that he doesn’t...

He believes that stigmatizing overeating in children will be a feasible solution to end the increasing epidemic of childhood obesity. However, Critser has several problems linked to his simple solution to a very complex problem. First, Critser doesn’t talk about the discrimination and the rude treatment that people struggling with obesity face. Second, he claims...

When you hear the word black what comes to mind? Some individuals think of it as a color. Other may think of it as depressing, dismal, wicked, evil, or just a sign of hatred. My definition is the total opposite. The essence of the word black displays a strong feeling of prosperity, deliverance and all...

Executive Summary This report provides the analysis of case study given to me. Gail Palmer Ashton Graduate School of Business ranks among the top schools of USA but the dean of the institute feels that the school has deviated from its foundations. This analysis proposes implementation of the balanced scorecard and performance metrics in order...