Determination of Social Classes in The Great Gatsby

In the novel The Great Gatsby by F. Scott Fitzgerald social class is determined by how much money you have and by where you live. The novel describes East Egg, where the more prosperous people live, and West Egg, where the common people live, to separate the social classes. Even though Jay Gatsby does have a lot of money and lives in West Egg, most of the money he has earned was attained in an illegal way. If money was only recently attained, “new money”, and the person came from a low-class background like Gatsby, the “old money” people, Tom, Daisy, and Jordan, believe that they should not be grouped together within the same social class.

Don't use plagiarized sources. Get your custom essay on
“ Determination of Social Classes in The Great Gatsby ”
Get custom paper
NEW! smart matching with writer

They believe the “new money” people are not as refined since they have to work, and they have a low-class background. At Gatsby’s party, Tom described these people as “a lot of these newly rich people are just big bootleggers, you know.” After reaching the Plaza Hotel and getting a room, Tom confronts Gatsby about how his money is made, “‘I found out what your ‘drug-stores’ were.

’ He turned to us and spoke rapidly. ‘He and this Wolfsheim bought up a lot of side-street drug-stores here and in Chicago and sold grain alcohol over the counter.’” (Fitzgerald, 115) In other words, Tom, who is from East Egg, inherited his fortune and does not have to work. In contrast, Gatsby had to work and did illegal things to get his money. This is seen as a less desirable way to make money and many wealthy people do not want to be grouped together because of this difference.

In conclusion, the way your money is attained is an important aspect of how society views you.

New York City is portrayed as a place where you can go and anything that happens in the city stays in the city. When they are in the city, the actions of the characters are executed without any consideration of consequences. Tom and Myrtle escape to the city to forget their married lives. At Tom and Myrtle’s party Catherine, Myrtle’s sister, is explaining to Nick why Tom and Myrtle don’t get married “’You see,’ cried Catherine triumphantly. She lowered her voice again. ‘It’s really his wife that’s keeping them apart. She’s a Catholic, and they don’t believe in divorce.’ Daisy was not a Catholic, and I was a little shocked at the elaborateness of the lie.” They were both stuck in the marriages that they had to be based on their class and neither was going to change that. So, they lived out their true desires in their made-up world in New York City. The Valley of Ashes symbolizes the transition of the characters’ worlds.

When Nick describes the towns of East Egg and West Egg as the “bizarre and not a little sinister” contrast between them, he is referring to the difference in the class of people that reside within them. In East Egg the inhabitants were born rich whereas in West Egg the inhabitants had worked for there wealth. Nick lived in West Egg “the less fashionable of the two”. “Across the courtesy bay the white palaces of fashionable East Egg glittered along the water”.

The American Dream is the belief that anyone, regardless of race, class, gender, or nationality, can be successful in America if they just work hard enough. In the novel the American Dream takes the form of the green light at the end of the Buchanan dock. Each character is achieving the dream in a different way. Jay Gatsby is perceived to have achieved the American Dream. He was born to a poor farmer and worked his way to a millionaire. Nick observed that as Mr. Gatz looked around Gatsby’s house, “his pride in his son and in his son’s possessions was continually increasing”. Mr. Gatz described his son’s ambition. “He always had some resolves like this or something. Do you notice what he’s got about improving his mind? He was always great for that.” Unlike Gatsby, Wilson was unable to achieve the American Dream. His neighbor Michaelis described him as, “one of those worn-out men: when he wasn’t working, he sat on a chair in the doorway and stared at the people and the cars that passed along the road…He was his wife’s man and not his own.” The novel appears to condemn the idea of the American Dream. For all Gatsby’s wealth he dies alone.

J. D. Vance is now one of the “elites” and I do not think his childhood experiences excuse him from acknowledging his current privilege. I do not think it is possible to completely shift one’s identity from one class to another. Your childhood experiences define a lot of your core character and you can’t just undo them. In fact, he is more aware and respectful of his current privilege then someone that was born with the privilege. In his TEDTalk, Vance implores his audience “that unless our society starts asking better questions about why I was so lucky and about how to get that luck to more of our communities and our country’s children, we’re going to continue to have a very significant problem.”

According to J. D. Vance’s TEDTalk social class is determined by three factors: money, opportunity, and social network. Vance talked a lot about how the social network that your born into predisposes you to a specific class. In the Great Gatsby we saw that Tom and Daisy were born into the wealthy class and the Wilsons were born into a lower class. Gatsby was born in a lower class but worked hard to improve himself and while he became wealthy he was never fully accepted into the “old money” class. Although Fitzgerald wrote the Great Gatsby in the 1920’s it’s commentary on the divisions between the classes still holds true today.

Determination of Social Classes in The Great Gatsby. (2021, Apr 15). Retrieved from https://studymoose.com/determination-of-social-classes-in-the-great-gatsby-essay 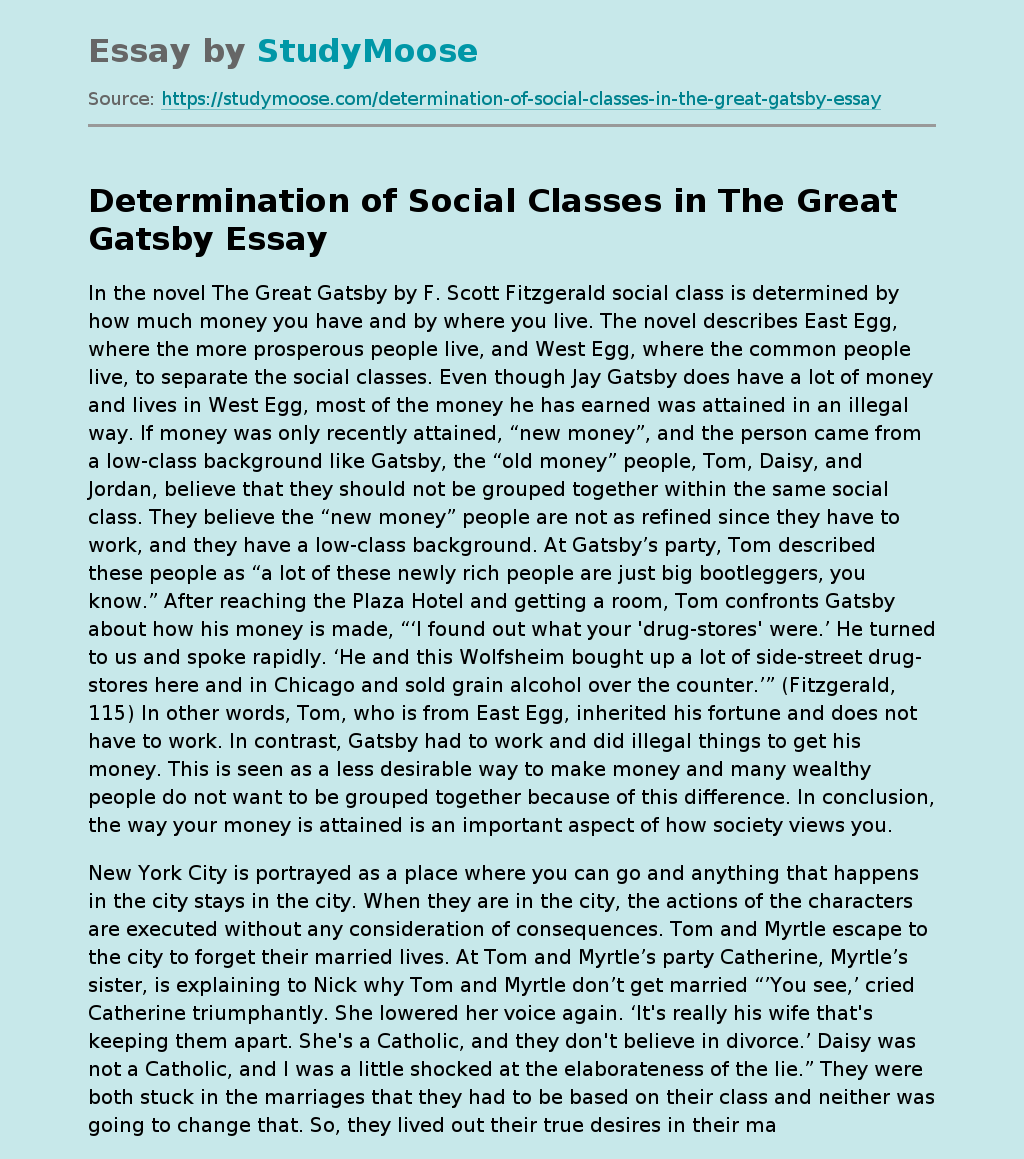