Depiction of Life in Two Plays

According to the Merriam-Webster Dictionary (n. pag. ), drama can be defined as, “a composition in verse or prose intended to portray life or character or to tell a story usually involving conflicts and emotions through action and dialogue and typically designed for theatrical performance.”

In the two plays that I have selected, drama is definitely a depiction of life.

Turn in your highest-quality paper
Get a qualified writer to help you with
“ Depiction of Life in Two Plays ”
Get high-quality paper
NEW! AI matching with writer

The Ritual by Zeno Obi Constance and Your Handsome Captain by Simone Schwarz-Bart are two of the most phenomenal Caribbean performances that have been composed. They both incorporate evidence of Caribbean background and hold a certain level of credibility for situations that occur in present day society. While perusing these plays, I recognized that they both shared a number of commonalities.

Some of the most evident similarities included the dramatic techniques; language, stage directions and recurring imagery.

In the play, The Ritual, Constance utilizes language to make a connection with the Caribbean readers and allow them to fully comprehend the message that he is attempting to address, in their own society. It is the claim that Constance remains true to the old speech values of the Caribbean which is in relation to the last bastion of linguistic innovation known as the Calypso.

Trinidad English Creole is utilized by the playwright to relate to the themes of anguish and struggle which creates an emotional unity between the audience and the actors.

A quote that stood out throughout the play as a form of “branding” or labeling was, “all them little women in them school is whore” (Constance, 8). This was lamented by Omega’s mother who was very small-minded and was partially responsible for Omega’s downfall.

The language employed by Constance allowed not only Caribbean dwellers to relate to the situations mentioned but also attracted persons from other regions of the world. This production was ranked one of the most performed plays in the forty year history of the Secondary School Drama Festival. Audiences from New York, Europe and the Caribbean exclaim, “There is a real need for this type of theatre…. I saw myself in all the characters- Great theme, great message, innovative and passionate.

It made me think and feel. Bravo! ” (New perspectives Theatre Company, n. pag. ). Constance believes that the language used to compose ‘The Ritual’ was symbolic as it related to “black” individuals in schools that were predominantly filled with white students during the 1970’s. He stated that it was a play that “forced the puritans to look at the pervasiveness of Omega’s situation which was a metaphor for all kinds of dysfunctional parenting and home-making” (Noel, 51).

Critics believe that Constance use of language to communicate an abrasive reality and to stimulate rather than reveal on another level, the issues occurring covertly then, ‘The Ritual’ must be perceived as a triumph. Hence, language plays a pivotal role to the success of this production. Similarly, in the play, Your Handsome Captain, Schwarz-Bart utilizes the dramatic device known as language to relate her message in relation to her themes of identity, masculinity, separation and isolation, and labour and inequality.

According to the New York Times (n.pag. ), the play, “relies primarily on its incantatory language and repetitious imagery to create a dream-like portrait of a couple struggling to maintain a long-distance relationship. ” As we are well aware of, the script was originally written in French since the playwright is a native of Guadeloupe, however, it was later translated to English by Jessica Harris and Catherine Temerson. In “Ton Beau Capitaine”, the playwright attempts to illustrate the constrictions of poverty and the measures one must endure for love.

Most of the dialogues that occur in the piece are in the form of Standard English. Traditional Haitian dances are choreographed which serves a dramatic function since they express the different moments of an individual drama rather than a collective state of mind. This is believed to be regarded as an additional language since the music and dance are expressive measures taken up by the actors to reveal their emotions. We observe that Wilnor is a very loving and faithful character who is willing to sacrifice in order to provide for his wife.

Evidence of this is his migration from Haiti to Guadeloupe, in search of a job to better his state of living for himself and his wife who remained in Haiti. Language is not heavily concentrated upon in this piece, however, the dances, music and repetition of words and phrases like, “Shriveled-up”, “Wilnor, how are you? ” and “Handsome Captain”. This illustrated that unlike Constance, Schwarz- Bart explored other mechanics involved with language to show Wilnor’s plight and the importance of the audio-cassette.

Depiction of Life in Two Plays. (2016, Sep 14). Retrieved from https://studymoose.com/depiction-of-life-in-two-plays-essay 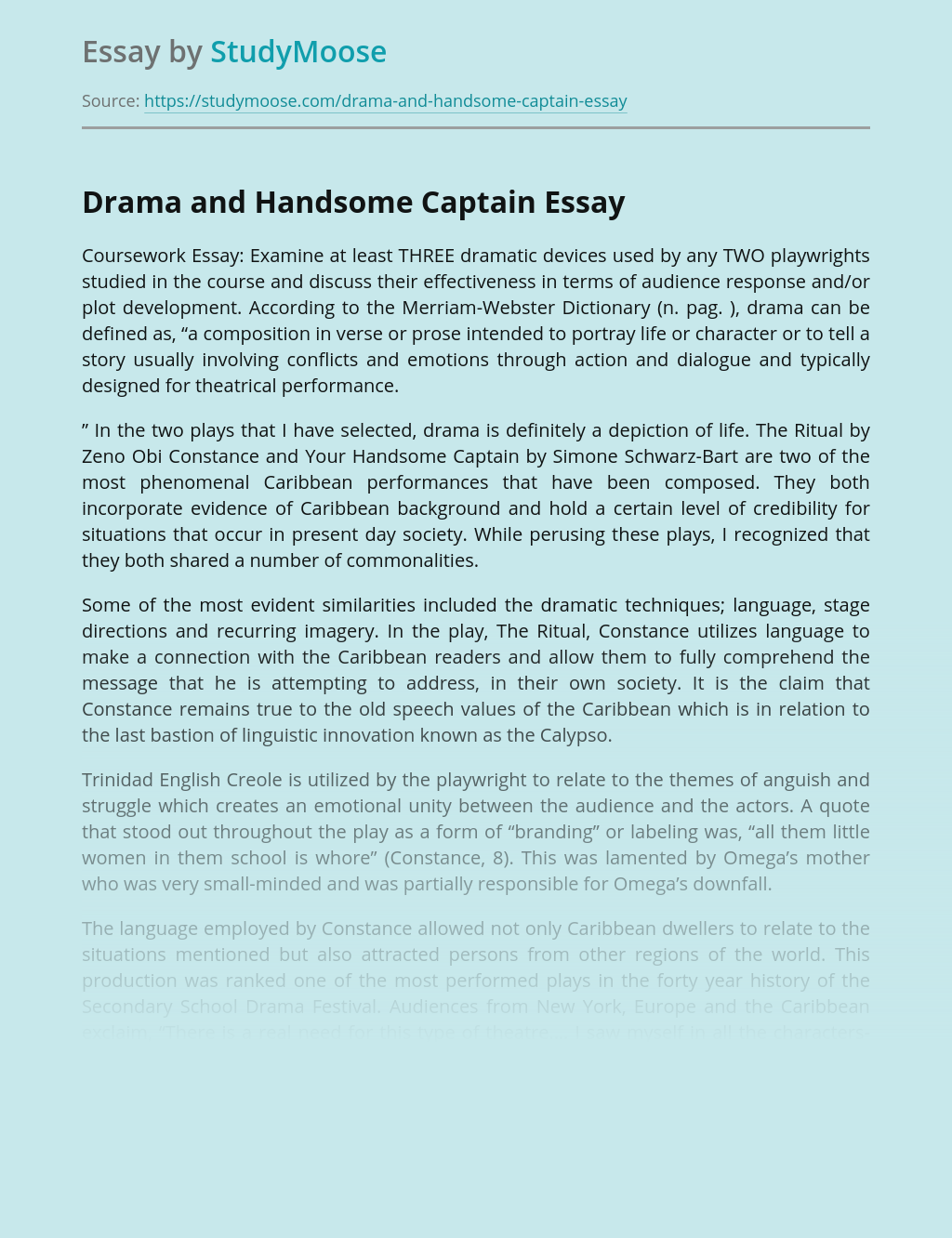 Turn in your highest-quality paper
Get a qualified writer to help you with
“ Depiction of Life in Two Plays ”
Get high-quality paper
Helping students since 2015
Stay Safe, Stay Original