I earned my BA in Government and Politics. I knew I wanted to work in government but at the time I enrolled, I was not sure in what capacity I wanted to work. I was a bit younger then. I could not see myself working in Washington DC or even at the capital in Austin.

Don't use plagiarized sources. Get your custom essay on
“ Degree Program ”
Get custom paper
NEW! smart matching with writer

I needed to balance a family and work life so I knew working on the local level would be best for me and my family. I also knew that I had no interest in becoming an elected official. However, I was fascinated with elected officials and I wanted to work in the political environment. Most of my family members have worked for government in one way or another.

Political decisions and the impact of such decisions were a common topic at the dinner table throughout my growing up years and even today. I was always aware that policy decisions had a profound effect on people’s lives either in a negative or positive way. I was also aware at a fairly young age that people often have a negative view of government in part due to inefficiently run organizations and corrupt elected and appointed officials. I wanted to be part of local government but I wanted to be better than those whose actions could be bought or bribed.

Although I was not sure at the time what career choice I would make, I knew it would be beneficial to understand both the mindset and motivation of elected officials and understand the civil servants that tend to stick around a lot longer than politicians. Politicians come and go with each election, but administrators and other staff often hold a government together and ease transitions over a period of many years.

I may have been one of the few, but I really enjoyed political theory classes. I enjoyed learning about ancient politicians as they rose and declined in power. As the centuries pass, I learned that technology changes, our understanding of the world around us changes, and our relationships with other nations and their leaders change but people in general have not really changed at all. Human nature, what motivates people to behave a certain way, has remained largely consistent over time. Although ethical behavior may be learned, and acceptable behavior varies among cultures, people still succumb to their own selfish motives whether self-preservation for one’s life or position in society, greed for wealth or power or self-sacrificing acts of love and kindness.

As far as how I apply a theory course to my everyday work, I am reminded each day as I work with a Council of six elected officials that each had their own personal motivations for seeking office. For the most part, I think people who are elected begin office with good intentions. Most of the cities I have worked for provided little to no compensation for serving. There is much time involved and a lot of meeting preparation, committee work and meeting nights that take away from personal and family time. There is too much work involved to become an elected official just to serve the public without some personal motivation driving their decision to run for office. Many enter local politics because they want to achieve one particular goal. The arrive with their own agenda. As a new Council forms, newly elected officials integrate with those who are already serving. Each must learn that they cannot achieve their goals alone. It takes a majority to make change. Each official, if they want to survive their term with reputations and families intact or be reelected, must learn to artfully integrate their own wants with those of the entire council. They may have learned about the concept of a democratic republic in high school and recited the Pledge of Allegiance at the beginning of every sporting event for the last thirty years, but it gets real and officials learn quickly what it really means to be part of a democratic republic and just exactly what patriotism means when they have to consider the greater good over their personal goals.

Describe 2 or 3 things you learned as you pursued your degree that have benefited you in your current position. What has been the overall benefit to your city now that you have completed the degree program? What did you learn that was most directly relevant to your position as a city clerk (or in your current position if you are not a city clerk)?

In addition to general knowledge about the local, state and federal levels of government, I learned perseverance, patience and to see the bigger picture of agenda items. I learned to look at current events from many perspectives. I learned to be slower to judge and to be politically neutral and to bite my tongue when I sometimes really want to shout when a poor decision is made. I learned that most things can be changed but some actions have consequences that can’t be undone. One of the things I learned that is most relevant is that there is a dichotomy between the administration and elected officials. I understand and I totally respect that my elected officials are the policy makers. I can provide the sum of my research on a topic and a recommendation but ultimately my place is to carry out their wishes even if I disagree with the decision. As the years pass, I have learned to help my elected officials become better at what they do by educating them, delicately, about their role in government. I provide them a safe environment in which to ask questions they are embarrassed to ask in a public setting. I provide information, answer their questions and anticipate any questions that could arise so they can have all the information they need to make their best policy decisions.

One great lesson I learned is that achieving my BA was really only the beginning of my education. I learned to appreciate the learning process and that no matter how much knowledge I gained today, there is always something new to learn tomorrow. Education may be formal in a classroom setting or may be informal in learning from others including elected officials, other staff members or citize 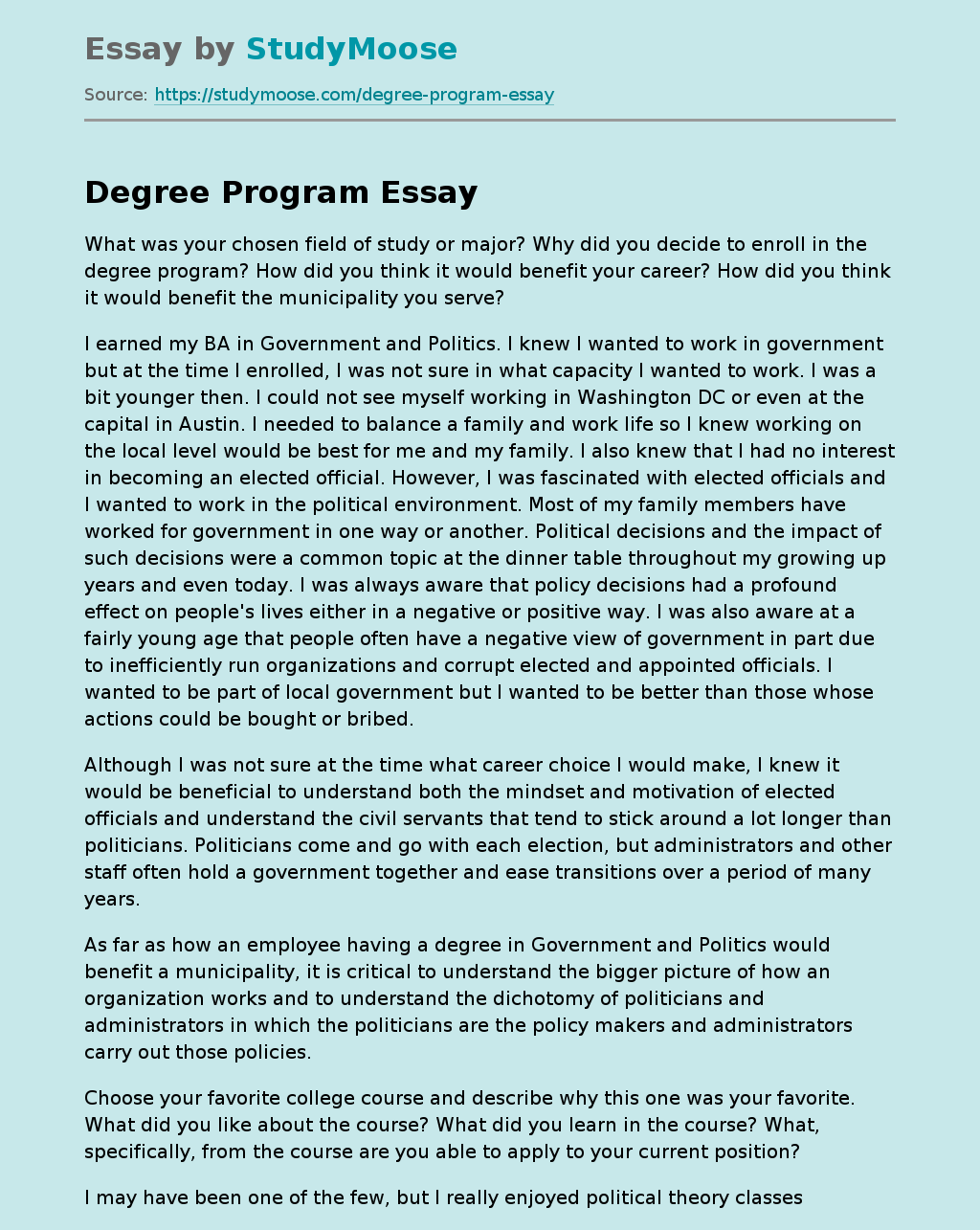