When Sidney Nolan painted the Ned Kelly series, he was interested in an ‘authentic national vision’. The first series was made up of 27 paintings from 1946-1947. The paintings all-together form a storyboard, telling the legend of Ned Kelly. One of them in particular is ‘Death of Constable Scanlon’.

The series, including this one, were all painted with Ripolin enamel on hardboard. You can see the many brushstrokes but some objects are painted completely solid for example Ned Kelly himself and the clothes of the constable.

Don't use plagiarized sources. Get your custom essay on
“ “Death Of Constable Scanlon” – Sidney Nolan ”
Get custom paper
NEW! smart matching with writer

The painting is full of things, and it is a scene from the bush land. No buildings can be seen but there are many trees and shrubs on a bare, yellow ground. The constable has fallen from his horse and they both are in mid air, while Ned Kelly is standing to the left holding a smoking rifle.

The painting is very out of proportion, this is evident in how the constable is placed. If you look at the two rifles, the constable is in front and therefore should be larger than Ned’s, but isn’t.

Ned is the largest object, followed closely by the constable and the horse to the right, they together make up the foreground. Going back further into the painting there is a fence, distant trees, a tent and another horse and policeman.

The figures themselves are very oddly shaped, like 2D objects cut out from paper. Ned is a simple, black silhouette with his eyes closed and hand holding the rifle.

The trees and objects in the background seem to have more shape to them and show shadows that help.

The painting is made up of very warm colours, of browns, yellows and oranges. There is an interesting patch of blue sky in the to right hand corner, and definitely doesn’t match the rest of the sky which is very dark and almost like a sunset. The constable looks very out of place with his formal uniform, quite opposite to Ned Kelly who seems like a natural part of the scenery.

The focal point of this painting is the Constable falling to his death. Ned Kelly though is considered the main focus of all the paintings, and all the events that happened around him.

The painting is very flat and you are lead into the work by first observing the falling man. The foreground is the first focus and then you go backwards and notice the smaller objects and people in the background.

The mood is quite hard to describe, even though it shows the last few seconds of Constable Scanlon’s life before hitting the ground and dying instantly, its almost comical in its appearance.

Nolan was trying to capture a moment in Australian History. The legend of Ned Kelly and his gang is well known and the series followed their story. He was trying to ‘depict a national myth’. He portrays Ned Kelly as a legend, not the man himself.

Nolan talked of this particular painting, he said,

“In a sudden, violent accident time seems to stand still. I have exaggerated, the bridle must have been long, but that at the levitated horse and constable increase the unreality of violent events. Kelly seems to be present only as a force of destiny.”

The Ned Kelly series now belong to the National Gallery of Australia in Canberra. They are a perfect example of the once then growing Expressionism and emerging Modernism. They would best fit into the Expressivism category as Nolan interpreted the legend into his own personal style. 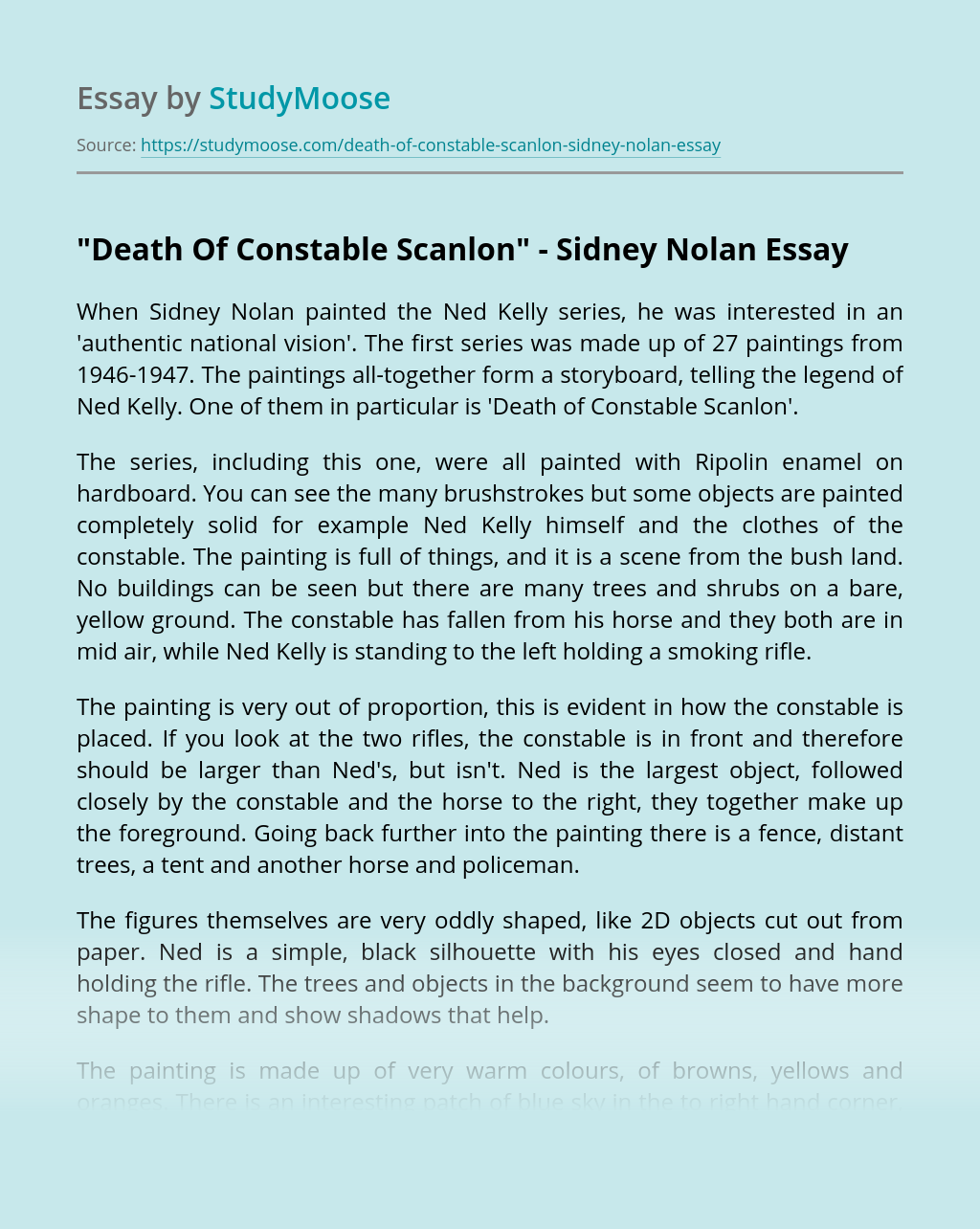