Death is the action or fact of dying or being killed

Death is the action or fact of dying or being killed; the end of the life of a person or organism. Until recently, there have been limited options of what to do with a body following death. Choices now include donating it to science, having it cremated, or buried. But, new research has found another option for your body after death. Using cryogenics, we may be able to utilize cold temperatures/medical technologies to preserve the body (or in many cases, brain only) until future science discovers the techniques for “reanimation” or coming back to life.

Don't use plagiarized sources. Get your custom essay on
“ Death is the action or fact of dying or being killed ”
Get custom paper
NEW! smart matching with writer

Cryonics challenges our concept of death by choosing a fourth, new option, which is better.

Cryonics theorizes that in the future, this could be our key to “immortality.” This is not to be confused with the branch that cryonics is classified in, cryogenics (Bridge). Compared to cryonics, cryogenics is the general branch of physics and technology that deals with cold temperatures (Bridge). Cryonics, on the other hand, is specifically using cold temperatures to freeze human beings that have been declared legally dead for possible repair and revival/ reanimation in the future (“Cryonics Timeline” 1).

Once pronounced dead, a team from the cryonics facility takes you and starts the process of stabilization. The team of experts from the cryonics facility (that you’ve been paying $400 a year) comes and takes your body, supplying your brain with a precise amount of blood and oxygen to preserve “minimal function” until arriving at the facility where your body will be stored (Watson 3).

Your body is then packed in ice and injected with heparin (an anticoagulant) to prevent your blood from clotting during the trip (Gorski).

As soon as you arrive at the cryogenics facility, your cells are drained of water and replaced with a glycerol-based chemical mixture called a cryoprotectant (“human antifreeze”) (Watson 3). This is done as “cryonics facilities can’t simply put their patients into a vat of liquid nitrogen, because the water inside their cells would freeze. When water freezes, it expands — this would cause the cells to simply shatter” (Watson 3). This entire process is known as vitrification (deep cooling without freezing entirely) and allows the bodies cells into a suspended animation (Sondomir).

Once all the water in your body is replaced with the cryoprotectant, your body is cooled on a bed of dry ice to about -130 C (-202 F), completing the vitrification process (Sandomir). Then, the body is finally put into an individual container that is then placed into a large, metal tank filled with liquid nitrogen brought to -196 C (-320 F) (Watson 4). The body is stored head down so that if there is ever a leak inside of the tank, the brain would stay in the freezing liquid (Watson 4). This whole process costs up to $150,000 for a full body preservation, while a neurosuspension (only your brain) is $50,000 (Watson 4). Due to the cost, cryonics is not a very popular choice compared to the more common after death options (Watson 4). However, cryonics facilities have started to pop up around the country.

Some rich people have been cryogenically frozen in hope for another chance. For example, the body of baseball legend Ted Williams is sitting in the Alcor Life Extension Foundation in Arizona (Bridge). Since his death in 2002, Williams “has been stored in a 10-foot-tall, stainless steel container, while his head is in a separate room” (Watson 4). Reanimation is the process of bringing back to life (“Cryonics Timeline”) .There are dozens of people stored in these units, but as of now no one has ever been revived/ reanimated (Gorski). This is because the technology necessary currently does not exist (Gorski). In fact, many critics of cryonics believe that scientists are simply “bilking people out of their money with the promise of an immortality they cannot deliver” (Watson 4).

Even many of the scientists who work for these institutes don’t expect reanimation to be possible in the near future (Gorski). One reason why this is is because that if the warming process isn’t done perfectly, the bodies cells could potentially turn to ice and shatter (Bridge). Although nothing/no one has been brought back from, cryonic suspension, living organisms can and have been brought back from a near-dead/ dead state (“Cryonics Timeline”). Techniques such as using defibrillators and CPR bring victims back from the “legally dead” on a regular basis. Other situations include neurosurgeons cooling patients bodies to operate on aneurysms — enlarged blood vessels in the brain — without damaging or rupturing them (Bridge).

Human embryos that are frozen in fertility clinics, defrosted and implanted in a mother’s uterus grow into perfectly normal human beings” (Watson 4). Using similar technology, cryobiologists hope to use nanotechnology in the future to reanimate the bodies and brains that have been frozen (Joseph). Nanotechnology allows the use of “microscopic machines to manipulate single atoms — the tiniest units of an organism — to build or repair virtually anything, including human cells and tissues. The hope is that one day, nanotechnology will repair not only the cellular damage caused by the freezing process but also the damage caused by aging and disease. Some cryobiologists predict that the first cryonic revival might occur somewhere around the year 2040” (Watson 4). This could lead to the possibility in the future (if the technology is available) for reanimation of a human’s brain or body.

In the next couple of centuries or even in the next decades, reanimation of humans could happen. In regards to cryogenics, scientists must start with just the inside before going outward (Joseph). The biggest problem with reanimation is the warming process as if the organs or tissues cells crack or crystallize while being warmed, they are rendered completely useless for further use (Joseph). Scientists at the University of Minnesota discovered a possible solution in March of 2017 (Joseph). By running tests on human cells, pigs arteries and heart valves, the scientists found that by focusing “on bringing back tissue that had been cryopreserved through vitrification, the scientists imbued the tissue with iron oxide nanoparticles that heated the samples uniformly and rapidly when triggered by a magnetic field. (The nanoparticles can be washed away after the tissue is rewarmed)” (Joseph).

This allowed them to rewarm tissue samples of up to 50 mm in volume and almost entirely keep their biological viability compared to samples that had not been preserved at all (Joseph). Existing warming methods can only effectively heat samples of a few milliliters in volume (Joseph). But, in comparison to other organs in humans and animal studies, a human kidney is 450 to 500 mm in volume (Joseph). When thinking about a full body and brain reanimations, the science may not be close, but is slowly progressing. Other major issues to overcome include degeneration of cells when heated up, warming the whole body, pumping it with blood, getting the heart to start and have nothing tear or rip, all at the same time (Stolzing). There is currently no real answer as to what might happen in the future with cryogenics, but there are plenty that of things scientists can disprove, like separating fact from fiction.

Cryonics is a science that is often mixed up in a lot of ways with movies and science fiction. For example, there is the defrosting scene in 2012, Captain America: The First Avenger where he is trapped in a block of ice for 70 years and using science, is brought back (The Avengers (2012). Some people don’t know the difference between fact and fiction. One common belief is that people who are already beginning to decompose can be brought back to life using cryonics (“Cryonics: Facts vs Myths”). As previously stated, the patients are preserved immediately when the heart stops beating (“Cryonics Timeline” 1). Another belief is that cryonics is only for the rich.

This is not true, as a one time, “lifetime subscription” is $28,000 (“Cryonics Myths”). This process is MUCH more expensive than a typical burial, but you’re paying a fair price for the chance at life after death. Finally, just like most theories, there is more than one side to the argument. The reason why there isn’t much talk about cryonics is mostly due to talk about the subject in the past as “too experimental” and as dangerous because of “playing god using technology” (Gorski). This leads to many disbelievers of the morality and promises made by these cryonics institutions.

As cryonics can be considered another option after death, most skeptics don’t believe it’s worth the price compared to the stereotypical burial or cremation. From cost to coming back when everyone you ever knew is gone, the general consensus is “why bother?” Another argument raised is how religions or people affiliated with them feel about this. Most religions define death as the moment when the soul leaves the body (“Cryonics: Facts vs Myths”). Cryonics defines death as a process, arguing that just because your body is not functioning, doesn’t mean that you’re dead (“Cyronics Timeline”).

In fact, cryonics states that death is more of a condition, “that cryopreservation isn’t a process of reanimating corpses, but rather of delaying death and preserving the body until better methods, tools, and techniques are made available to resuscitate the body, ultimately being a very pro-life initiative” (“Cryonics Myths”). Finally, people don’t believe, scientists included, that this could ever work or happen in the near future. As most of this sounds like it’s coming out of a movie, the amount of doubt is reasonable for it’s worth.

Personally, I believe a second chance should always be given, especially when a person is terminally ill or has an unstoppable disease. Cryonics is based entirely on the hope of future medicine and science to will make it possible, we can bring people back for that “second chance” at life, a fresh start. By using cryogenics in the future, we may be able to utilize these cold temperatures/medical technologies to challenge our concept of death by choosing a fourth, new option, life-giving option.

Death is the action or fact of dying or being killed. (2019, Nov 25). Retrieved from http://studymoose.com/death-is-the-action-or-fact-of-dying-or-being-killed-the-example-essay 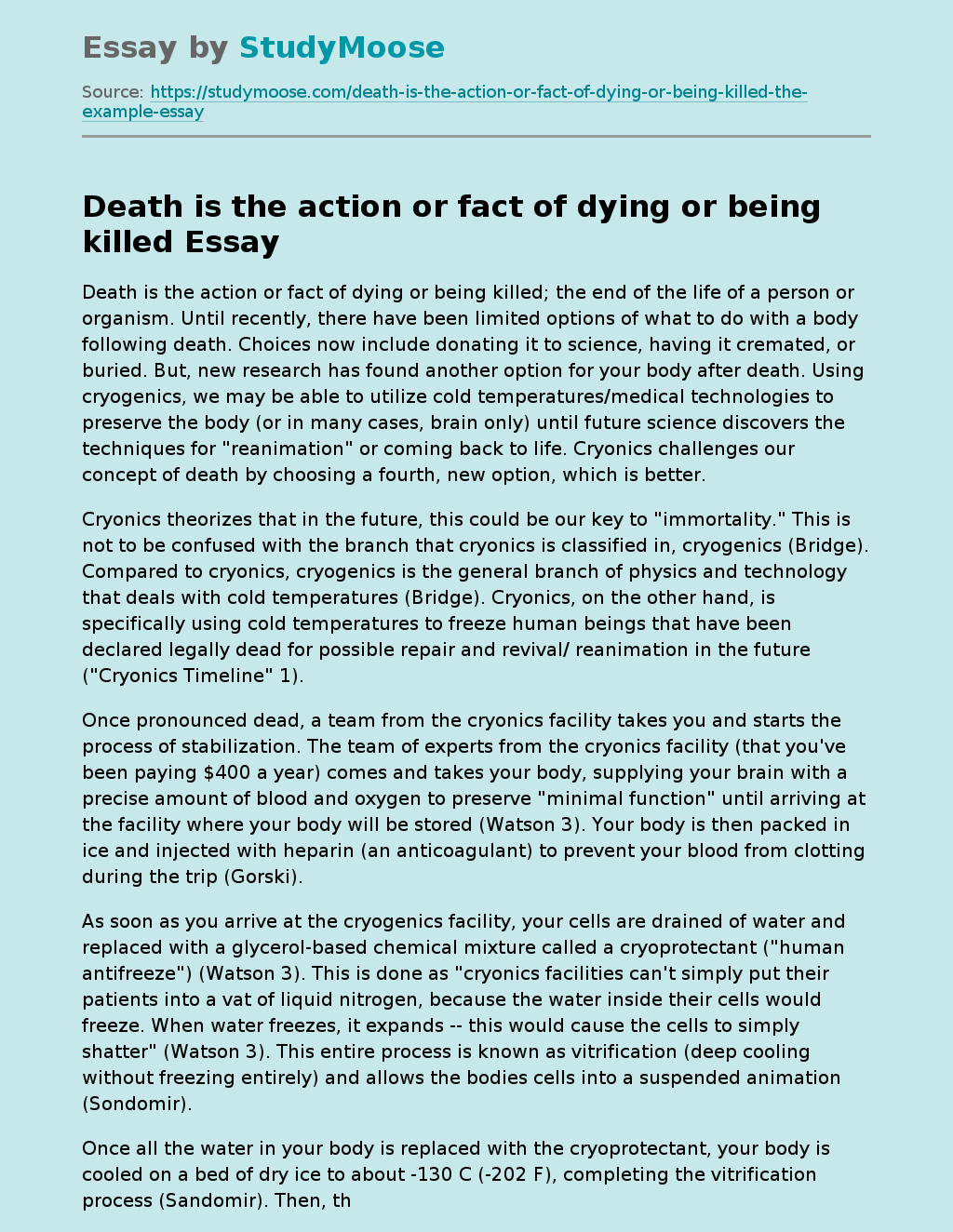