Thesis: It would appear that the assertion that Democratic-Republicans were strict interpreters of the Constitution while Federalists were not are only somewhat accurate.

The Letter from Thomas Jefferson to Samuel Kercheval is of particular interest because Jefferson outright states “…I know also, that the laws and institutions must go hand in hand with the progress of the human mind”. This is somewhat different from the traditional image of Jefferson interpreting the constitution as absolute under any circumstances. The fact that he himself writes that the constitution must be adapted to the times suggest that Jefferson, like the Democratic-Republican party as a whole, was not such an absolutist.

Don't use plagiarized sources. Get your custom essay on
“ DBQ Federalists and Democratic-Republicans ”
Get custom paper
NEW! smart matching with writer

Jefferson also states that “I am certainly not an advocate for frequent and untried changes in laws and constitutions…” which would seem to indicate that He also believed that a change to the constitution was a serious thing not to be taken lightly much like the historical image of the Democratic-Republicans.

Jefferson believed that amendments would eventually become necessary to preserve the constitution as a credible document, however he also believed such changes should only be made when absolutely necessary.

The fact that this idea about the constitution (that it was not perfect and would eventually need change) contradicts the historical image of strict and absolute interpretation of the constitution that Democratic-Republicans, and by extension Jefferson himself, are given.

-While Jefferson shows sympathy towards eventual change on issues such as slavery he did not follow through in the least as president.

-Jefferson is sometimes portrayed as the first great president by historians.

-Jefferson actually helped sign in the constitution with many of the men who would go on to be federalists.

One document that might suggest that Federalists were not all so supportive of the federal government over the states was the speech that Federalist Daniel Webster delivered before Congress on December 9th 1814. Webster states “If the secretary of war has proved the right of Congress to enact the law enforcing a draft of men out of the militia into the regular army, he will be able at any time be able to prove quite as clearly that Congress has the power to create a dictator”. This quote is loaded with sentiments normally expected from a Democratic Republican rather than a Federalist. States rights, negative sentiment towards Federal authority over the states, and the assertion that this expansion of Federal power is a step towards tyranny, are all opinions typical of a Democratic Republican, not a Federalist. This clearly suggests that not all Federalists were loose interpreters of the constitution since states rights is an argument usually made by someone advocating for a strict interpretation of the Constitution.

– It would appear that this speech was relatively pointless to affect the conflict at hand considering that the war of 1812 (Mr. Madison’s war as dubbed by Federalists) was only fought for a few more weeks before it was officially concluded. – Federalists were quite against this war with Britain which could mean that Webster could have come to this argument more out of anger over the war than actual ideals. – It is interesting that the measure Webster is referring to took place in 1814 considering that the Democratic-Republicans, who would have been against drafting militiamen into the national army, controlled the Congress, Senate, and the White House. -1814 was the last year that Federalists had a major role in Congress given their attempt to secede from the union in 1815 in the Hartford Convention.

The report and resolutions of the Hartford Convention serves to demonstrate how Federalists did support a loose interpretation of the constitution. In the resolution the participants (of whom many were Federalists) proposed that several amendments to the constitution be adopted by the states. While this may seem fairly insignificant the fact that they were trying to conform state laws to national law shows a very strong leaning towards Federal authority over state authority.

This was very much in line with Federalist principles and loose interpretations of the constitution since they are proposing three changes to several state constitutions. The Federalists are taking a stance against state rights which are guaranteed in the constitution and requesting that the states conform to federal law which can be seen as a rather loose interpretation given that powers not afforded to the national government are given to the states by the tenth amendment.

-The three proposed amendments seem to inhibit the power of the government which is more in line with Democratic-Republican ideals, which could suggest that this was meant to gain bipartisan support in the states.

– The Hartford Convention was also famous for being the unofficial demise of the Federalist party considering that the resolutions also threatened to declare New England independent from the union if the government did not comply which the largely Democratic-Republican populated nation viewed as treasonous.

– One of the amendments proposed made it illegal to enforce an embargo for longer than 60 days which is interesting considering that leading up to the war with Britain, many Federalists were advocating ignoring the embargo on Britain.

One Final Document that would serve to demonstrate how there was a large grey area in how Democratic-Republicans and Federalists interpreted the Constitution is actually another speech made by John Randolph in 1816 before Congress. Randolph himself was a very strict interpreter of the constitution but what makes this speech interesting is who he is calling out in this speech and why. “We have another proof that the present government (the Madison administration) have renounced the true Republican principles of Jefferson’s administration on which they raised themselves to power…”. Randolph is calling out the Democratic-Republican president James Madison, for “renouncing” the policies laid out by Thomas Jefferson who is seen as the establisher of many of the ideals of the Democratic Republican Party.

Madison is accused of “aggravating the burdens of the people for the purpose of favoring the manufacturers…”. Essentially he is being called out for raising taxes on the middle class. Why this demonstrates how Democratic Republicans could have taken a loose interpretation to the constitution is because raising taxes is something that many Democratic-Republicans believed to be a state by state issue even though the Constitution gives the government the power to levy taxes. However Madison is going against that ideal and raising the national tax rate which given the Democratic-Republican interpretation of only allowing states to raise taxes, is a very loose interpretation.

-Madison was known to have changed his opinion on these matters several times as a politician which could explain why he was raising taxes.

-Randolph also linked Madison to John Adams who was also a loose interpreter of the constitution and rather unpopular amongst the Democratic-Republicans because of it.

– Madison was very much influenced by Thomas Jefferson who would have definitely disapproved of raising taxes on the middle class.

– Madison was the first president to preside over the “Era of Good Feelings” or the time period where the Democratic-Republicans enjoyed a near one party rule in the government. This tax would have been a very unusual interruption in the usual lack of debate and argument that was apparent in Congress and the Senate.

DBQ Federalists and Democratic-Republicans. (2016, May 27). Retrieved from https://studymoose.com/dbq-federalists-and-democratic-republicans-essay 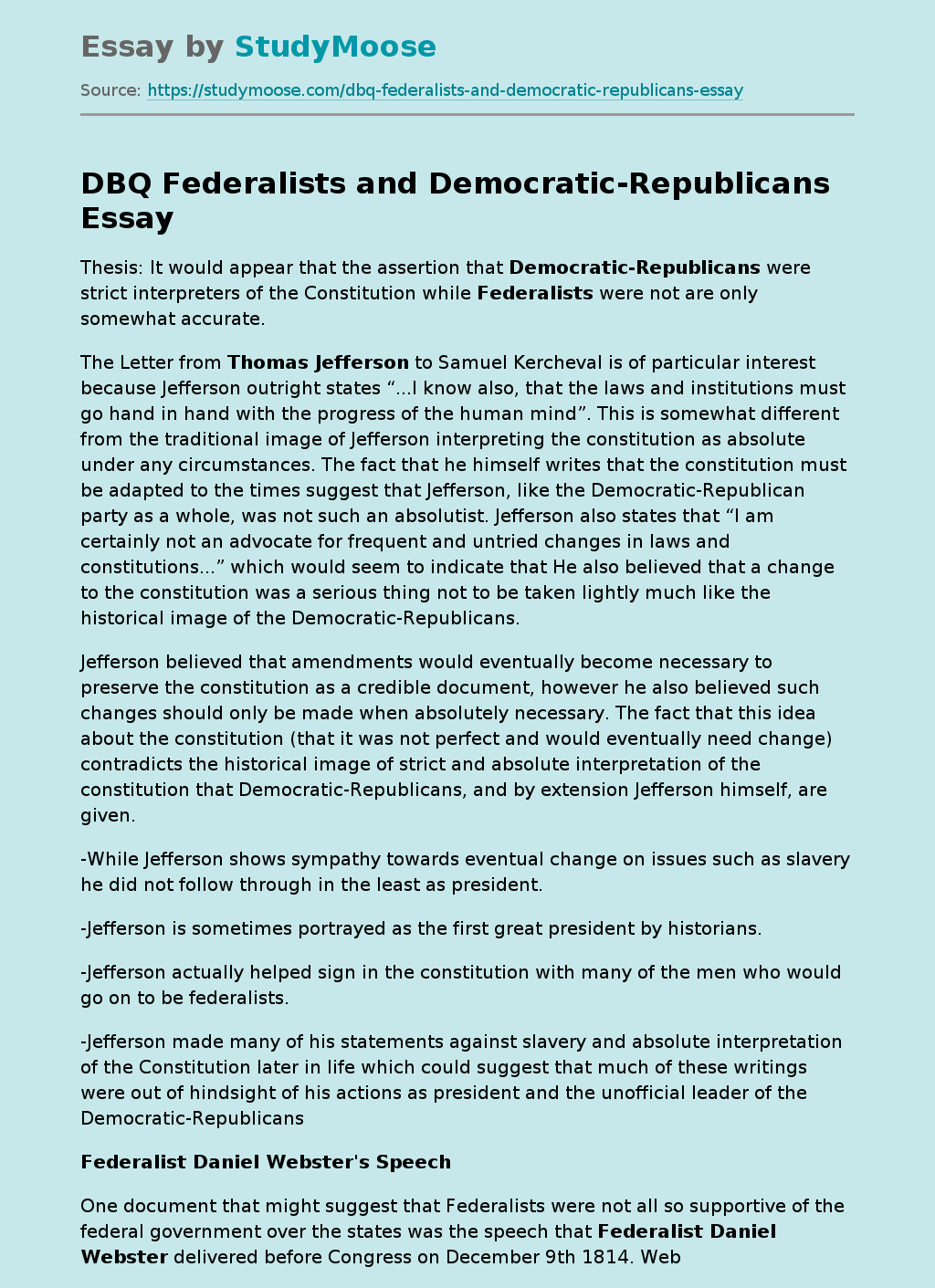