Professional sports have undergone some dramatic changes over the last fifty years in the world through the inclusion of the Latinos, African American, and Asians. The dominance is usually on the basis of race. For example, the whites were the ones who were dominating some sports. How because thee blacks have embraced this new culture and they are the ones who are currently dominating games such as football and basket ball. Latinos and African American have all increased their dominance in some games which were only meant for the white for example base ball.

Don’t waste time
Get a verified expert to help you with Cultural or racial diversity in proffesional sports
Hire verified expert
$35.80 for a 2-page paper

Despite the cultural and racial integration there are some challenges which still exist, these challenges includes: opening opportunities to people of all gender, ethnic background and races, integrating athletes with different cultural practices This paper is going to look at racial diversity and cultural diversity in professional sports. The paper will conclude by giving a general summary of the points after which the writer of this paper will gives his final opinion on this topic.

Currently there is a very little research that has been done in this field.

Therefore, the aim of this paper is to contribute to the much needed literature on this field. Main body Sport bring different people with different cultural believes and practices together. What is usually unique about these people is that they are usually brought together with a common goal or objective. During this time they are usually dependent and interdependent on each other, and they are also able to interact with each other and to appreciate each other’s cultural believes and practices.

Through this, they are able to adopt diverse cultural or racial practices. .whenever they are practicing or when they are competing they should be encouraged to adopt a common language so that no one should have a feeling that his or her culture is not being appreciated. Team managers should also ensure that each player’s culture is appreciated. The team managers should also ensure that they are not treating all the players equally; this is because people from different places or religion have different values and practices (Allison et al 2002 pp. 128 – 130).

Professional sports should avoid making generalization concerning a certain ethnic group or the minorities, this is because scholars have found out that it is problematic, any explanation that tries measuring everyone else in comparison the norms of the majority’s culture should be perceived with reticence. In the event that this is done, players or the team might feel demoralized hence they might end up performing poorly (Allison et al 2002 p. 31) The term racial and ethnicity are usually interchangeably used in describing the various groups of people.

Whenever the coaches are selecting players, they should not do so on the basis of races, as it used to be long time ago. For example in 1963, despite their being good black base ball players in the United States, their was no any black player who was playing for the national team, in fact the first black to play a major national league side was Mc Donald who went and proved his critics wrong. Sports are one important thing that is able to foster peace and friendship among different people with different diverse culture.

Since time in memorial, sports have been one of the few things that rarely see gender, color and religion while making many people to embrace the different cultures from different countries in the world (Bhandari 2001). Outside the professional sports, some people have been found to be racially judgmental. While being interviewed by the Parade magazine, Senator Bradley Bill argued that the people who are obsessed by the race issues are stupid. No one can play in a team that is that is composed of African American for a very long duration without recognizing the stupidity of the country’s obsession with race.

Senator Bradley Bill calls for respect between human beings, treating each other fairly, disagreeing with honesty, and exploring the common humanity thoughts (Robert 2001 pp. 25 – 31) Sports have also been vulnerable to racial integration and affirmative action; this is because while not every race has undergone the mental faculties’ evolution that is usually necessary for creation of modern technological civilizations, every race in the world has undergone evolution in terms of physical facilities. For over sixty years, sports have given universities and other colleges to admit more noon white’s students.

It is easier to get a Black who performs better in basket or football field as compared to the biological lab or in Air force academy. Many teachers usually find it much easier to encourage blacks to play base ball rather than study medicine. Professional sports have also been integrated racially and they give a very important ideological prop for multiculturalism and some racial integration in the society (Carrington et al 1987). In the event that cultural diversity is the aim of the professional sports then a shift must take place in a well structured manner.

Sports providers should open their doors to all the community members irrespective of their gender, race, religion or cultural practices. They should also take part in inclusive practices rather than just acting as passive sports purveyors (Cashman 1995 pp. 22 – 28). Conclusion Professional Sports has played a number of important divergent roles in relations to integration of different diverse cultures. It has been widely used to promote integration, ethnic identity and cultural diversity.

However, the writer of this paper is of the opinion that most of the researcher which has been conducted in relationship to gender has mainly focused on male. The writer of this paper will like to conclude by stating that Professional sport teams and especially those with diverse culture sport do recruit team players by their competence and skills and not by their cultural or national background. Team coaches and managers should be aware of the diversity. Players coming from different places or with different ethical backgrounds should not be treated equally given that they have different beliefs and values. 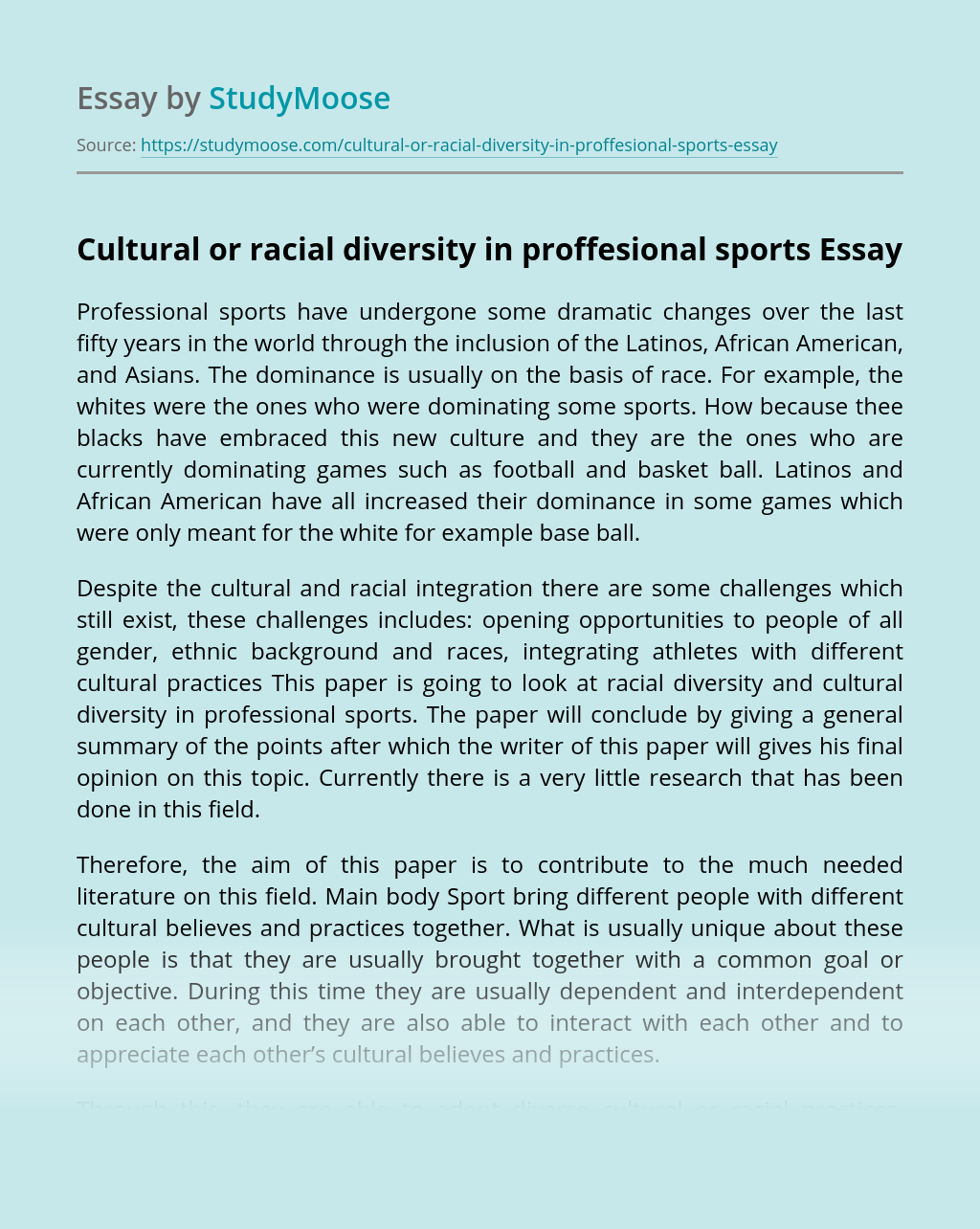 Don’t waste time
Get a verified expert to help you with Cultural or racial diversity in proffesional sports
Hire verified expert
$35.80 for a 2-page paper
Stay Safe, Stay Original