Cultural diversity is a big part of the community I was raised in and apart of today. Many people spend their whole lives surrounded by one race or culture, but I grew up surrounded by many. Having been raised in a society influenced and shared by so many different races, I had very little idea about what or why racism existed in the world. Having never been taught and seeing very little racism growing up I believed benefited me, today and benefited my future.

Don't use plagiarized sources. Get your custom essay on
“ Cultural Diversity ”
Get custom paper
NEW! smart matching with writer

Sadly racism is not only intertwined with the United States past but also with its present and its future.

Racism has been part of the history of the United States, and helped create this country as we know it today. Racism not helped shaped the United States and infiltrated every aspect of American society while showing no signs of decreasing. Many people view racism as an evil minded treatment of one individual to another.

This is not a correct assessment though, and would be more easily understood if it was viewed more accurately, an institutional ideology. The reason racism is allowed to subsist because governments and institutions foster and maintain racism. Even when these governments and institutions determine that the practices of a particular group of people are racist, individuals at the top of these hierarchical organizations are hard pressed to bring about change. To understand how racism relates to us in the United States today, one must understand the real definition of racism.

“Racism is the belief that one group of people with a particular biological make up is superior to other groups with a differing biological make up.” So one could infer that the groups deemed superior gain economic and social dominance over the other cultural groups that are deemed inferior, even with the many strides that have been made over decades to mend the situation. An excellent example of a country that has made those strides and still lack racial reconciliation is the United States. From the bus boycotts in the fifties, to the sit-ins and marches in the sixties one could assume that these would be the starting steps to improvement. While the United States was mending the hatred and racism between black and whites another type of racism was creeping its way into American society. Today racism has taken a new face, one that has become multi-coloured and multicultural. To be able for the United States to keep a culturally diverse appeal new legislation and laws are being written against discrimination. Affirmative action has been taken to allow equal opportunity for employment, housing, and even in the military.

Television and movies have had to change their format and even some of their characters in order to obtain political correctness. Even with so many fighting for change, there will always be the ancient invisible barriers blocking the few who are looking to main the status quo. Even with so many people trying to seek improvement for this country, it cannot happen unless every individual is working to abolish racism. There is racism in every facet of life no matter who someone hangs out with, or who someone even works for. Being in the Marine Corps I see different races every day, and work with different races every day. Mission accomplishment is the number one goal of the Marine Corps, so when a job needs to get done every one does their part of their job and race is not an issue. That is the way my career has gone so far, so when I read an article about racism in the Marine Corps it shocks me. New websites and social networking sites are being created all the time.

A new social network website was created with the logo “online community for whites by whites”, so it was a social website for only white people. Out of the many number of people who have made a profile there have been about forty personal profile that have listed the military as their occupation. Out of those forty a number of them are wearing their military uniforms in their profile pictures. Even more disturbing a number of the military members have poster racial slurs and racial propaganda. One member states that he “hate(s) illegal immigrants with a passion and feel(s) every true red-blooded, white American should do whatever it takes to stop the foreign invasion.”

While another lists The Turner Diaries, which is a white supremacist novel, as his favourite book. It is important for members of the armed forces to not participate in these types of websites or groups. The first reason not to participate in these organizations is the Pentagon has regulations in affect that prohibit active duty members form participating in extremist groups. The second reason is those racial extremists who serve in the military could be inadvertently training future domestic terrorists, and the United States does not need any more terrorist on her soil. A solution for this problem would be senior military members mentoring their junior service members on the dangers of becoming involved in these organizations.

Being in the United States Marine Corp I have many close friends that are from different countries in the world. One of my close friends is from the Philippines, and has a very strong accent when he speaks. Sometimes he gets his words confused and does not make any since when he speaks. Marines tend to point out these faults, not just with him, but with many other Marines that are from different countries and have trouble speaking English. My friend does not believe that his fellow Marines are being racist, but are just having a friendly poke at him. Marines do not mess with only a few Marines, or the Marines from other countries, but every Marine.

It is not because we are racist, or are a mean group of people, but picking and jibing on one another is just the way that Marines bond with each other. When my friend says that he is getting picked on, yes it sometimes hurts, but in the end it makes him feel like he is part of the family. If Marines are not being picked on they are usually secluded and out of the Marine Corps family. Racism is wrong and should not be used for any reason, even to bring people together. Racism may start with a good reason, but the final product will fester into an infection that could spread and destroy a family within a short time.

Racism is in this world to stay whether people like it or not. Individuals believe that if they spread the word about the dangers and negatives of racism then it will cease to exist, but that is not the truth and will never happen. As long as we humans exist and have emotions, the knowledge of right and wrong, and pride there will be crimes. Whenever a person graduate’s high school as valedictorian or an athlete becomes the fastest man on the planet, stereotypes will follow.

Crimes, education, athleticism all turn into a stereotype and stereotypes are a form of racism. Racism is one of the things that drive our great country, and create some of our countries greatest works. Racism is what helped form and mold this country into what it is today. Without racism then this country could be one of a single culture, there would be no freedom to branch out and try new diverse things. The dangers of bringing so many different cultures into one space are there, but I believe the good thing we bring to the table 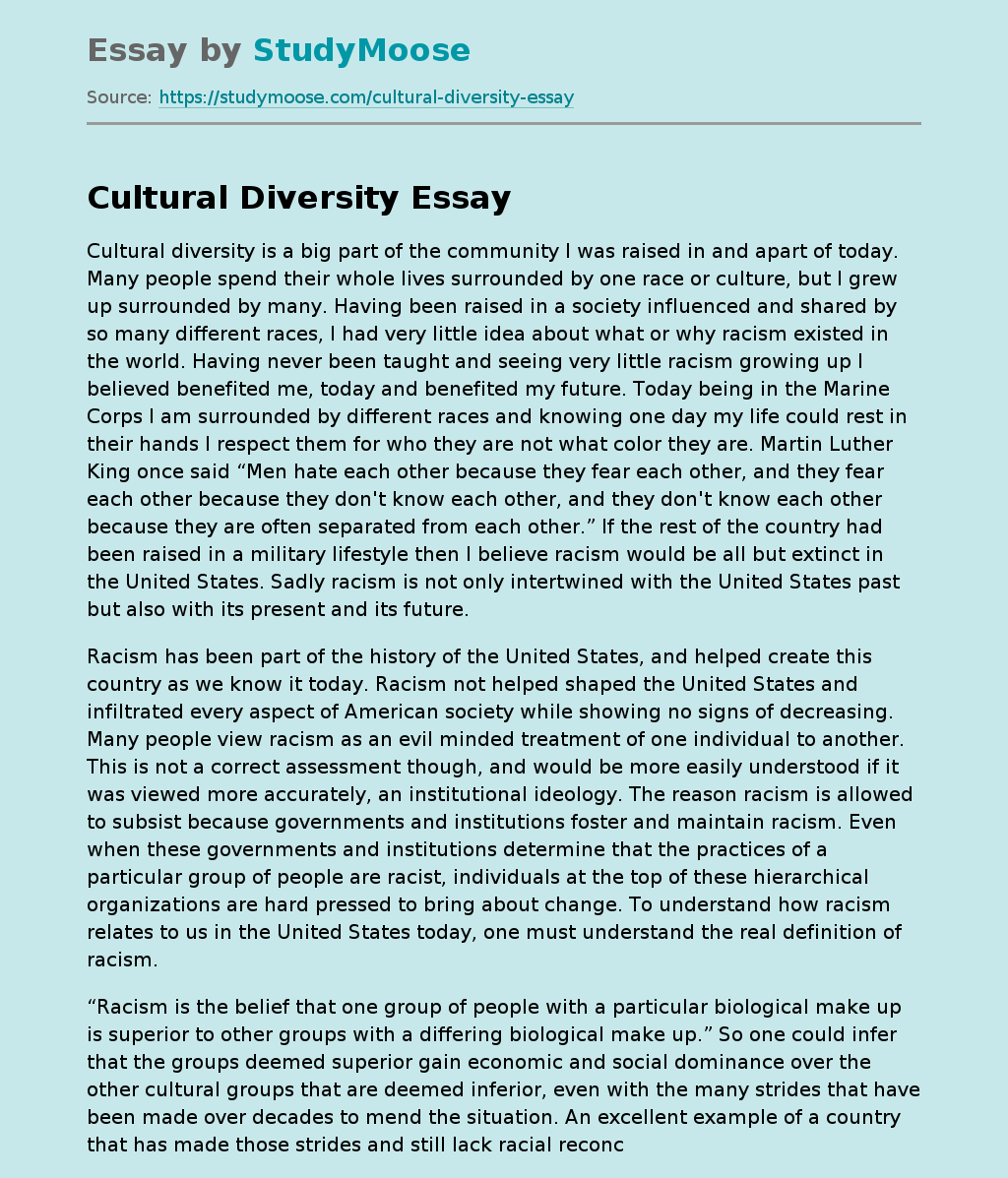