Racism A word? An emotion? An Experience? Racism is a culture deeply

Racism. A word? An emotion? An Experience? Racism is a culture deeply intertwined into our society which fully optimises the acrimony of the human mind. The film ‘Hidden Figures’ directed by Theodore Melfi reveals the lewd nature of racism in its crude form, the outright rejection and repudiation of coloured rights within contemporary society. The highly influential music video ‘A Change Is Gonna Come’ by Sam Cooke also presents this cultural dissention within society, utilising contrasting techniques to reveal a deeper connotation of the specific stratum within the idea.

Don't use plagiarized sources. Get your custom essay on
“ Racism A word? An emotion? An Experience? Racism is a culture deeply ”
Get custom paper
NEW! smart matching with writer

An analysis of the two related texts and their techniques will contribute to an evaluation of their effectiveness.

Racism has always been contextually blurred, with everyone to their own opinion, but in modern society it is widely defined as “prejudice, discrimination, or antagonism directed against someone of a different race based on the belief that one’s own race is superior”.

The film ‘Hidden Figures’ depicts racism distinctively within the scene which presents the main character Katherine Johnson as she makes her daily trip of half a mile to the coloured bathrooms unbeknown to her white supervisor.

When publicly questioned in the presence of an all Caucasian office space about her absence from her desk for 40 minutes at a time, she outpours her story of rejection, discrimination and prejudice, which resounds throughout the room to the na?ve ears of white co-workers. As a result, her supervisor takes it upon himself to bring down the barriers within the workplace that have resulted in segregation.

Within this intrinsically powerful scene, two specific film techniques are employed to immense effect in aiding the moulding of the theme of racism through the characters and setting. A visual technique utilized within this scene is the movement and positioning of influential characters, which is especially evident whilst Al Harrison (NASA Director) is questioning Katherine. When Al first confronts Katherine, he is standing on a balcony, overpowering her inferior body which creates a metaphorically accurate perspective on racism. After she answers with a statement replying to his question he comes down from the balcony and converses at her level, inferring an empathetic nature becoming evident.

This transfer from a position of superiority to one of equality provides extensive insight into the theme of racism and metaphorically starts to bring down the barriers of segregation due to Al’s realization of the impact that racism is having on his workforce.

Within this exact scene, Katherine becomes emotionally overpowered by the effects and perturbing nature of segregation and begins a powerful plea to the audience and her fellow Caucasian co-workers. Her bold nature during the plea enables an empathetic response and begins to dismantle the body of pride and naivete views within the minds of the onlooking co-workers. The use of diegetic sound to generate immensely dynamic emotion chains through weakness and trembling within her voice emphasizes her position and compliments her already powerful dialogue. Her breathing and panting can be heard as she screams to gain the empathy of her audience and this translates to a feeling of intensely potent regret of white racial ascendency. Provoking the audience to a pondering of the effects of racism highlights insightful use of diegetic sound complimenting dialogue and enforces the power of Katherines plea, whilst maintaining a clearly defined link to the theme.

The resulting feeling and view that this film manages to reach in and lift out of the depths of any heart is an important aspect of the film’s effectiveness. This film vividly embodies and brings to life the issue of racism during the 60’s in an authentic, creative and original manner which is relevant to life in today’s world. This results in effectively educating the intended audience about the issue in a way that they can relate to within their lives.

Highly regarded as one of the single most influential song and music video combinations of the 60’s, ‘A Change Is Gonna Come’ by Sam Cooke vividly highlights the issue of racism. Written and performed from a powerful black perspective, the techniques used contribute to an objective of evoking empathy. A full shot displaying a coloured woman on her knees, weeping and pleading a cause along with the lyrics of “back down on my knees” provokes an empathetic emotion, through detailed use of the camera angle. This high angle sustains the metaphorical position of superiority over the subject to characterize a portfolio of emotions within the viewer. This full shot paired with the lyrical caption efficaciously captures the emotional essence of racial discrimination and is used similarly in Hidden Figures through use of character placement and Diegetic sound.

Sustaining the intrinsic use of duration and tone colour within the musical composition of the piece ‘A Change Is Gonna Come’ helps to support the message of the lyrical composition and builds the thematical power of the piece. In the film Hidden Figures, the use of diegetic sound is powerfully used to convey the intended emotions which contrasts to the use of musical concepts which achieve the same effect within this music video. The composer has manipulated duration to assist in the building of mood within the piece by using predominantly longer note values whilst also adopting specific sound sources which contribute to an overall ensemble tone colour that is mellow and sonorous. This use of tone colour and duration invokes empathetical emotions which are parallel to the lyrical composition, specifically the line “It’s been too hard living, but I’m afraid to die”. This line is an example of a litotes, which provides two negative ideas contributing to an affirmative idea of pain and suffering and specifically supplicates the feelings of solemnity and empathy.

Whilst sustaining a contextual link to the 60’s through genre, the music video “A Change is Gonna Come” simply and powerfully portrays the issue of racism in a way that is relevant to the modern world. This helps to solidify the issues relevance and reality within the audiences lives and within local communities today. The strong contextual link is why this music video is so relevant to anyone living in today’s world who may witness the discrimination of the Aboriginal people for example.

Hidden Figures and A Change Is Gonna come are both choice examples of texts which bring the theme of racism to life through integral links to contemporary society. Both texts utilise the power of sound, be it musical or diegetic vocal sound to complement textual and visual ideas which work in unison to create a truly authentic and original perspective on racism within society. This results in the texts becoming somewhat though-provoking, moral questioning and utterly flattening at times as they fully reach into the elements of racism and their effects on humankind. That poses the question for all of us. Racism. What does it mean to you?

Racism A word? An emotion? An Experience? Racism is a culture deeply. (2019, Nov 28). Retrieved from https://studymoose.com/racism-a-word-an-emotion-an-experience-racism-is-a-culture-deeply-example-essay 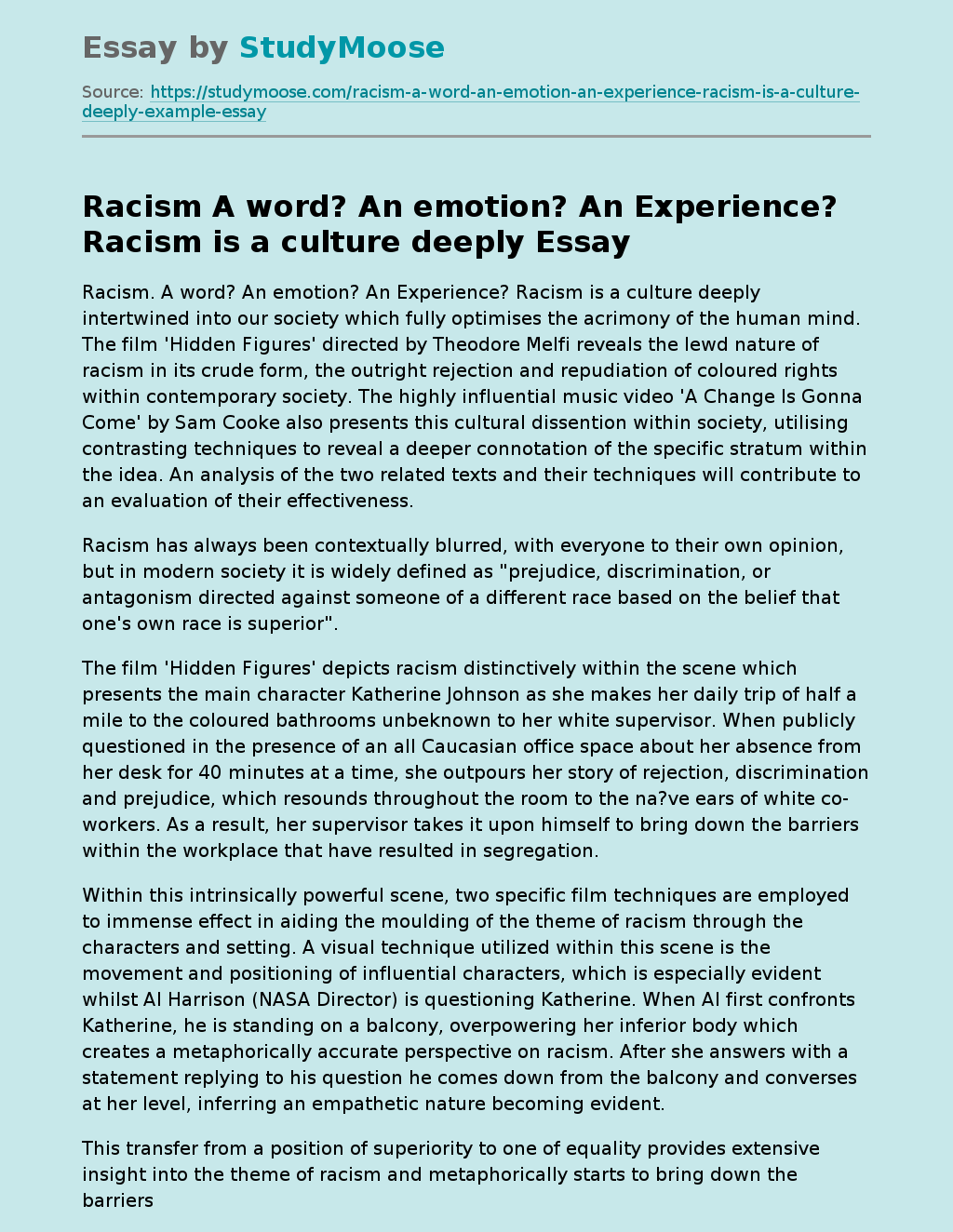