Emotions have significant role in the film 12 Angry Men when the jurors have to come to a decision about whether the boy is guilty or not. The different emotions shown by the jurors hinderstheir perspective and judgements on the case as well as towards the testimonies from the witnesses taken during the trial. Juror #3 was firm and determined that the boy was guilty. He had a powerful hatred towards teens in general after having past experiences with his own son. This makes him look past all the evidence built against the claim that he is guilty.

Don't use plagiarized sources.
Get Your Custom Essay on 12 Angry Men: Emotion Just from $13,9/Page

For example, he refused to believe the doubt towards the testimony of the old man.

As per the testimony the old man heard the boy yell “I’m gonna kill you” as well as heard a body hit the floor a split second later. After discussing in detail it comes into consideration that there could have been no way for the old man to hear anything as the el train would have been roaring past his window.

As described by Juror #8 one is unable to hear their own thoughts with the unbearable noise of the el train. This clearly brings the old man’s testimony into doubt. Juror #3 is still persistent and stubborn to believe the truth that is being set in front of him solely because of his anger and hatred towards teens.

In contrast, Juror #2 is new to the juror and hence very happy and excited about the case. When he gets the opportunity to talk about the case, he is very open towards any argument that is being made. He thinks logically of every piece of evidence that was not bought in court and makes his decisions regarding that. Therefore with a very unprejudiced happy mind his ability to think logically and reasonably about the case comes into practice. This is how different jurors come to different conclusions through their emotions in the movie 12 Angry Men. 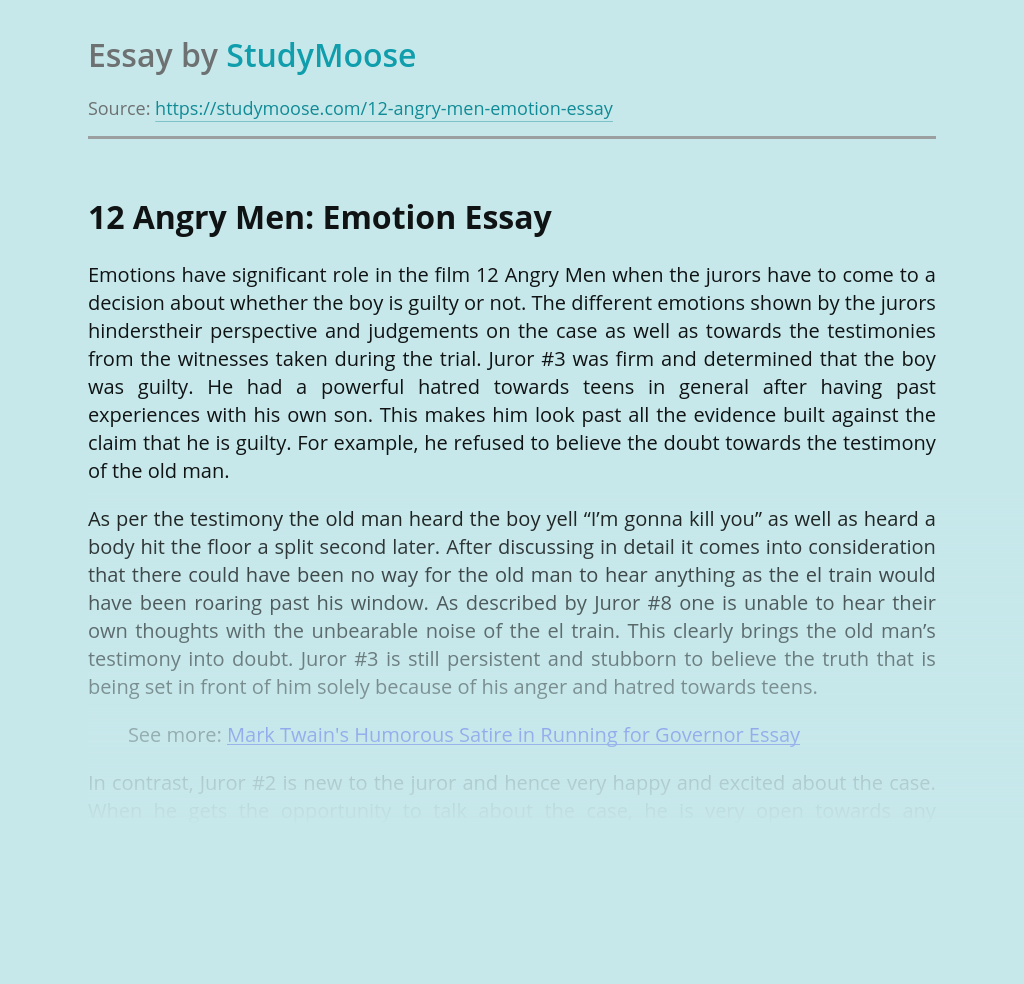 In the novel ‘To Kill A Mockingbird’ by Harper Lee, learning to “walk about in someone’s skin” is a main theme, particularly as two of the main protagonists Jem and Scout learn to do this as they grow up throughout the book along with the reader. Atticus, the children’s father, educates the children on how... VIEW ESSAY

1. Using the full spectrum of segmentation variables, describe how Darden segments and targets the sit-down dining market. The types of segmentation include geographic, demographic, psychographic, and behavioral segmentation. For geographic segmentation, Darden has all of its Longhorn Steakhouse restaurants in the eastern half of the United States but they are trying to expand to... VIEW ESSAY

Emotions have significant role in the film 12 Angry Men when the jurors have to come to a decision about whether the boy is guilty or not. The different emotions shown by the jurors hinderstheir perspective and judgements on the case as well as towards the testimonies from the witnesses taken during the trial. Juror... VIEW ESSAY

View sample
Analysis the Song "The Way We Were"

There is a song—a love song that has touched several hundred thousand audiences’ hearts; it expresses the overflowing feelings of a woman who used to live in her intense true love. “The Way We Were,” by Alan Bergman, Marilyn Bergman, and Marvin Hamlisch illustrates the innermost emotions and regret of a middle-aged woman when she... VIEW ESSAY

In the poem “ Sa Babaye Nga Naghubo Didto Sa Baybayon Sa Obong” , Renee Amper takes us to a scene on a beach through his eyes. It tells the emotional experience of the persona while looking at the girl naked. The writer uses rich imagery, symbolism and figures of speech to communicate the speaker’s... VIEW ESSAY