According to the legal system of the United States, every man put on trial is considered innocent until proven guilty. In the beginning of the film 12 Angry Men, however, this theory can almost be considered false to the jurors involved in a murder case. This 18-year-old Italian boy from a slum is on trial for stabbing his father to death. It is apparent that most jurors have already decided that the boy is guilty, and that they plan to return their verdict quickly, without even taking time for discussion.

Don't use plagiarized sources. Get your custom essay on
“ 12 Angry Men: Art of Persuation ”
Get custom paper
NEW! smart matching with writer

However, one juror, Juror Eight, stands alone against eleven others to convince them that the boy is not guilty, which means that he needs to persuade 11 other jurors from all walks of life, each with his own agenda, fears, and personal demons. In order to do so, he must prove with enough valid evidence that this boy is wrongfully accused of killing his father. Although this sounds like an impossible mission, he ultimately persuades the other 11 jurors to change their mind, with the reasonable doubts he finds during the debate, and more important, the superior persuasion techniques.

See more: Is the Importance of being earnest a satirical play essay

To sum up, Juror Eight uses incremental persuasion during the debate in the small private room. When persuading, he does so one small step at a time. He gets the rest of jurors to agree to a small point, and then gets agreement on a further smaller point. Then another and another until he has got them to his final destination.

The brilliant part of it is that Juror Eight makes each small point very easy to accept and as logical as possible so none of the rest can really object to it. The debate starts with the first round of vote, in which all jurors except Juror Eight vote for guilty.

After the first round of vote, he calls into question the accuracy and reliability of the only two witnesses to the murder, the rarity of the murder weapon and the overall questionable circumstances. He further concludes that he cannot in good conscience vote “guilty” when he feels there is reasonable doubt of the boy’s guilt. However, it looks like Juror Eight has no way to change his situation at all unless he can obtain additional support from any of the rest, and it is obviously difficult to persuade one juror to be the first one changing his vote.

At that point, Juror Eight subtly use a persuasion method called final request. By doing so, he simply completes his argument, and asks the jurors to do just one more thing. He then takes a bold gamble that requests another anonymous vote. His proposal is that he will abstain from voting, and if the other eleven jurors are still unanimous in a guilty vote, then he will acquiesce to their decision. The secret ballot is held, and a new “not guilty” vote appears. Juror Nine becomes the first to support Juror 8, feeling that his points deserve further discussion. To continue, Juror Eight points out the first reasonable doubt.

Based on his argument, one of the witnesses’ testimony, which claimed to have heard the boy yell “I’m going to kill you” shortly before the murder took place, could not be treated as sound evidence. In this situation, the persuasion technique being used by Juror Eight is Plain Folks. He tries to sell the jurors a message as an ordinary person, and the jurors are to believe that because they feel that Juror Eight is just like them and can be trusted. Juror Eight states that he used to live very close to the rail, and he cannot hear anything while the train passes.

Therefore the old man is unlikely to hear the voices as clearly as he had testified. Also, he stresses that people say something like “I’m going to kill you” constantly at daily life but never literally mean it. Eventually, he persuades Juror 5, who had grown up in a slum, to change his vote to “not guilty. ” In addition, Juror Eight uses another scheme to question the witness’s other claim. Upon hearing the murder, the witness had gone to the door of his apartment and seen the defendant running out of the building. However, he had an injured leg which amputates his ability to walk.

Juror Eight tries to persuade the jurors by using evidence this time. In order to maximize the evidence’s effect, he lets the audiences engaged and involved in a walking experiment. Upon the end of the experiment, the jury finds that the witness wouldn’t have made it to the door in enough time to actually see the defendant running out. And come to the conclusion that, judging from what he heard earlier, the witness must have merely assumed it was the defendant running. At the same time, Juror Three, who looks irritated throughout the process, is about to explode.

Juror 8 cleverly catches the chance and applies the persuasion technique called double bind to it. Double bind is a situation where a person has a choice (typically between two options), but whichever way they choose, they lose out, often with the same result. This situation may occur by chance, but in persuasion it is often carefully engineered by the persuader. He calls Juror Three a sadist, saying that he wants the defendant to die purely for personal reasons rather than the facts. This led to Juror Three’s explosion.

He can’t help shouting out “I’ll kill him! And Juror Eight calmly retorts, “You don’t really mean you’ll kill me, do you? ” Thus proving the point he mentioned earlier. This eventually turns Juror Two and Juror Six decide to vote “not guilty”, tying the vote at 6 to 6. This is absolutely a turning point in the film. At that time, every juror, no matter what his vote is, has started to realize Juror Eight might be eventually capable of changing the verdict. Furthermore, Juror Four states that he doesn’t believe the boy’s alibi, which was being at the movies with a few friends at the time of the murder. Juror Eight then tests how well he can remember the events of previous days.

Juror Eight uses a persuasion technique called logos here. He focuses on cool logic and rational explanation to concrete his argument. When Juror Four only remembers the events of the previous five days, Juror Eight can easily draw to a conclusion that even an intellectual person like Juror Four cannot remember every single detail in his life. He continues to set up another premise: the accused has a huge fight with his father, and he was accused by the police soon after he finds out his father is dead. Therefore it is reasonable to conclude that he is under great emotional stress.

With that saying, the jurors should not attribute the fact that he forgets the movie’s name as evidence that he kills his farther. Another question by Juror Two is that whether the accused, who was nearly a foot shorter than his farther, was able to stab him in such a way as to inflict the downward stab wound found on the body. Again, Juror Eight uses evidence by conducting an experiment to see if it’s possible for a shorter person to stab downward into a taller person. The experiment proves that it’s possible. This result probably is leading to juror’s incline to “guilty” again.

However, Juror Five then explains the correct use of a switchblade, that no one so much shorter than his opponent would have held a switchblade in such a way as to stab downward, as it would have been too awkward. With Juror Five’s help, Juror Eight then continues to persuade the jurors by one of the most complex techniques in persuasion, reframing. This technique requires the person to step back from what is being said and done and consider the frame. Then he leads people to consider alternative lenses, effectively saying ‘let’s look at it another way. ‘ And finally he changes attributes of the frame to reverse meaning.

In this case, With Juror Five’s word, Juror Eight successfully reframes the outcome of the experiment as sound evidence that provides another reasonable doubt for the accused. This revelation augments the certainty of several of the jurors in their belief that the defendant is not guilty. The last reasonable doubt is that the witness who allegedly saw the murder had marks in the sides of her nose, indicating that she wore glasses. To persuade Juror Four, Juror Eight tries to use the method called truth by association. He cannily asks Juror Four if he wears his eyeglasses to sleep, and Juror Four admits no one does.

Here, in order to produce a convincing argument that something is true, Juror Eight first associates it with something else that is already accepted as true. He proves that the witness must wear glasses, and then explains that there was thus no reason to expect that the witness happened to be wearing her glasses while trying to sleep, not to mention that the attack happened so swiftly that she would not have had time to put them on. According to these truths, Juror Four finally admits that there is reasonable doubt in the case and changes his vote as “not guilty”.

Throughout the debate, Juror Eight always seeks to increase the significance of certain elements that he wants the jurors to take more seriously or see as particularly important. The persuasion technique applied here is repetition. He continuously repeats sentences such as “We are deciding on a man’s life. ”, “It is possible. ”, “People can be wrong. ” and “Are you sure? ”, etc. The repetition of words not only causes it to become remembered (which is persuasive in itself), it also leads the jurors to accept what is being repeated as being true.

With no doubt, by doing so, Juror Eight achieves the result he wants. In conclusion, this film shows how Juror Eight’s excellent persuasion skills can change other’s life. More important, while keeping his persuasion so effective, he has never done something unethical to persuade others, such as threating or lying. One of the insights that everyone should learn from this film is that one ought to stand up and exert his utmost efforts to fight for his point of his view. And with the powerful persuasion technique and the faith in ethic, everyone has the chance to make a difference. 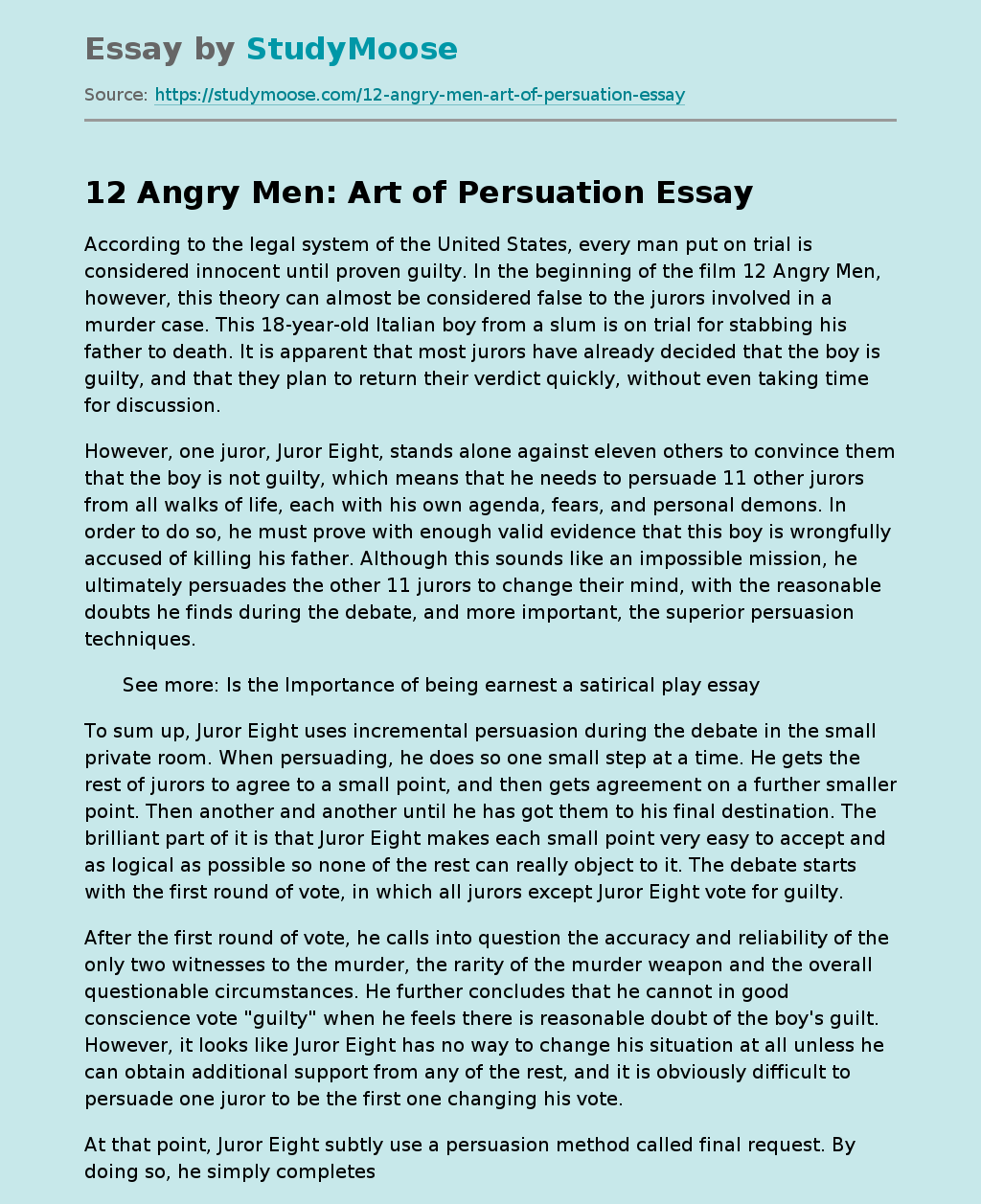