The movie “Twelve Angry Men” is a film about twelve jurors in a murder trial deliberating the guilt or acquittal of a defendant on the basis of reasonable doubt. All of the jurors come from very different backgrounds and see things in very different perspectives. This essay will be analyzing the group discussion that was dramatized in the film. The issues that will be brought up in this essay are leadership, participation, climate, conflict, and argumentation. One of the leadership theories that is used in this film is the styles theory.

Don't use plagiarized sources. Get your custom essay on
“ 12 Angry Men Analysis ”
Get custom paper
NEW! smart matching with writer

The Styles Theory of Leadership examines a collection of specific behaviors that constitute three distinct leadership styles: autocratic, democratic, and laissez-faire. In the beginning of the movie all of the jurors were going to vote the defendant guilty expect for Juror #8. He was the only one of the jurors that wasn’t in a rush to go home and go about their business. In his opinion they shouldn’t send a man to jail without discussing it first.

This is an example of a laissez-faire leader. He was laid back and didn’t demand to be the leader or to control anyone.

He simply asked that they share why they beilieed the defendant was guilty. He then asked them to loisten to what he had to say and if they still didn’t believe that there was reasonable doubt he would vote guilty so that they could all go home because that is what they wanted. Although he is the “odd one out” it is clear to the viewer that he is the leader of the jury not the Forman.

By the end of the film he had convinced all of the jurors to believe that there was reasonable doubt and that the defendant was not guilty. Trait theory was another theoretical approach that was used in the film by Juror #8.

He possessed a few leadership traits that persuaded some of the other jurors to listen to him. Juror #8 was intelligent, respectful, open-minded, calm, and had good listening skills. At the begioing of the film everyone was yelling at him and telling him that he was crazy. He didn’t fight back or get angry he stayed calm. He just wanted everyone to hear him out and have a discussion before acquitting a possibly innocent man. Juror #8 listened to what everyone had to say and brought up different ways that the evidence could have been wrong. He didn’t force or peer pressure anyone to change thier vote, but he had such compelling arguments that everyone came to the realization that there was a possibility that the defendant did not kill his father. 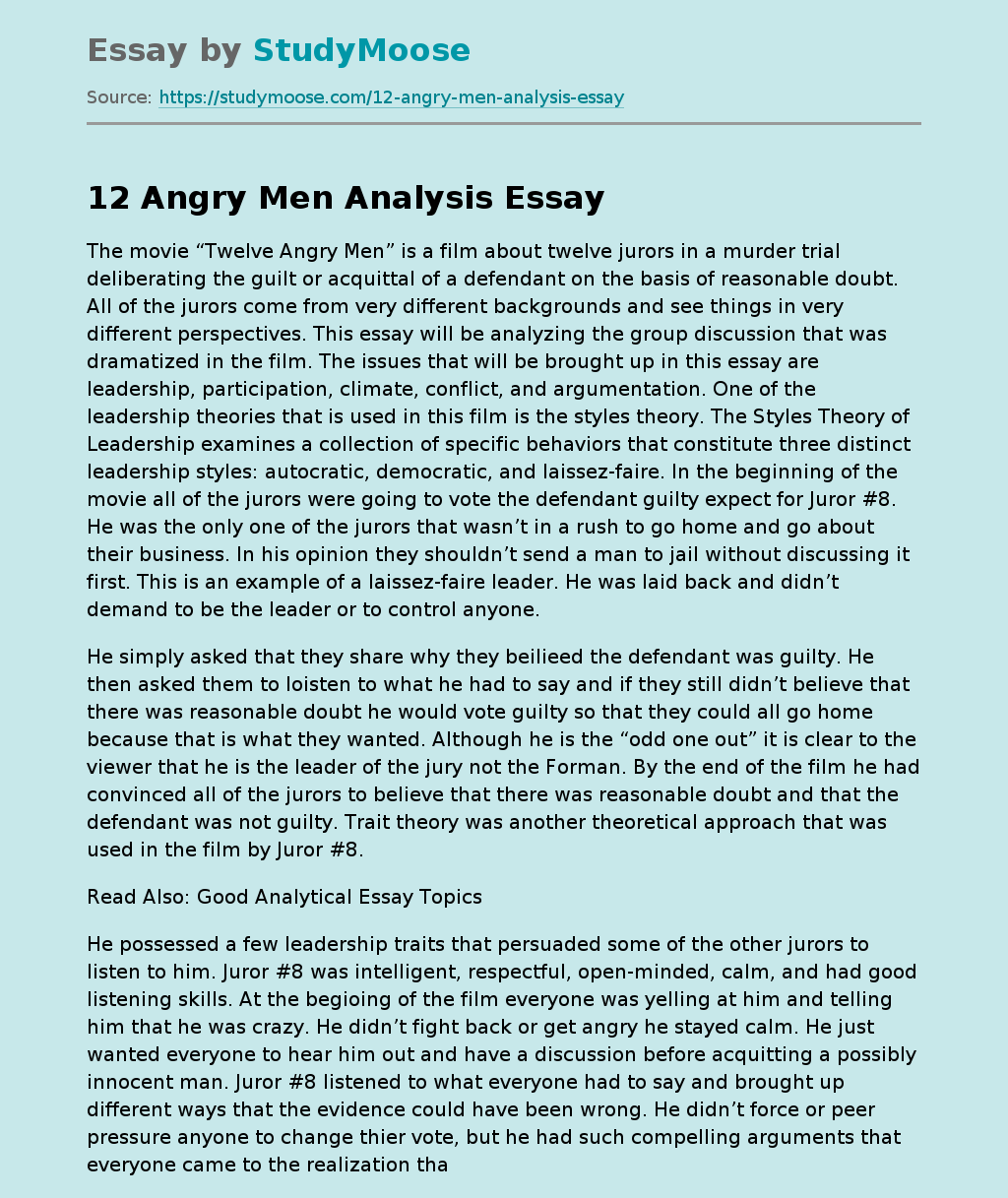