Cultural Autobiography of a Person from Saudi Arabia

My name is Hanan Hassan, and I was born in September 21, 1992 in Jeddah, Saudi Arabia. I am the eldest of nine children that consist of four girls including me and five boys. To most people I am an ordinary twenty- one year old who works and goes to school, but what most people don’t know is that I’m basically the second mother of my household. Even though my mother is alive and well, I was taught at a young age to take responsibility and to be responsible like an adult.

Don't use plagiarized sources. Get your custom essay on
“ Cultural Autobiography of a Person from Saudi Arabia ”
Get custom paper
NEW! smart matching with writer

Not only do I take care of my siblings, but I cook and clean and do everything my mother does, because I was raised to do those things easily without complain. Anyone who isn’t part of my family/friends would look at my life and think I have no freedom. But the way I was raised taught me to be an adult, yet act my age. When I look back at the past years, I was raised in three different cultures.

My whole life consists of being raised in three different cultures, but most importantly, the culture I was born into is the one that I identify with the most. I say that because that’s who I am, and I am a Somali native. Although I have a different nationally, my ethnicity is who I am.

Mostly, people nowadays cannot differentiate between the two. My nationality is where I was born in, and my ethnicity is who I am. As a child I struggled with both. I grew up in a town full of Arabs, and the only Somalians I actually interacted with were my family. In any event, if you don’t know much about your identity, you go into this crisis mode. Until I came to America, all I knew was that I was a Muslim and Somalian. There’s this need to know who you are, and where you come from, and every day you learn something new about your identity. When I came to America, there was a huge culture shock. For instance religiously, I grew up in countries where there was a mosque in every couple of blocks, and here the opposite were churches. Everywhere I looked was a church. It was a complete different atmosphere. In the Muslim countries, when it was time for prayer, you would be able to hear the entire mosques at once calling everyone to pray.

And it was very weird not being able to hear the call for prayer time. But as month and years passed, I’ve gotten used to not hearing that. Not only was not hearing the call to prayer different, but holidays didn’t have the same effect as they used to. In the United States, when it’s turns winter, the festivities of the holidays begin. I don’t even celebrate Christmas, but when everywhere you look at is lit up for Christmas, you feel part of a community. Since everyone around you is celebrating all these holidays, you feel as though you’re part of it. Whenever Eid comes around, it doesn’t feel the same way as it did as to when I was a child. For instance, when it was Ramadan time in Saudi Arabia, everyone used to get together to have big feasts. People would always stay up late and wait for the call of prayer, so that everyone can start fasting again. Also, shops would close early when it was time to eat. Families and friends would celebrate the whole month together, and go to the mosque together. Not only was everyone up, the whole city would be decorated and children would get gifts and monies from the elders, and it was just a beautiful time to be a kid.

When you compare the American culture and the ones I grew up in as a child, they are completely different. The way we dress here, eat, family, religion, and everything else is different. For instance, in Saudi Arabia, the culture there is for women to cover up. Women are covered from head to toe. Majority of it is because the Saudi culture is influenced by religion, whereas in America everything is by choice. Our women in America have the choice to cover or not, and in Saudi Arabia, if women are not covered, there are consequences to pay. As child, I was able to wear whatever I wanted, because I was not a woman yet. I remember women not being able to drive, just for the fact that they’re women. Men were able to do anything they wanted, whereas women mostly stayed home. Mostly, women stayed home and took care of the family members. They did all the cleaning and cooking, whereas the man went to work and did all of the outside work. Not only did women stay home, they were also not allowed to drive, which was a culture shock when I saw women driving in America and Egypt.

I never really understood as to why women couldn’t drive a car, but it was illegal for them to do that. Women don’t have much say there, because the Saudi government uses religion as an excuse to minimize all of the rights women have. They say a woman shouldn’t drive, because her husband should be able to take her to wherever she pleases, but reality is no one is willing to do that. Additionally the problem wasn’t just the covering part; the problem was women’s rights being oppressed. And when you’ve lived in an environment like that it’s hard to get used to a new culture that established freedom among every individual. In addition, the cultures I was raised in required me to cover up and to respect myself and the others around me. Both of my cultures are two cultures that heavily rely on religion. Sometimes it’s hard to separate what the religion requires and what your culture requires. Although, now some think both are one in the same, but people interpret each one differently. In other words, people put religion and culture in the same category. For example, my family is very conservative.

Both of my parents come from strict families who take religion very seriously. Back in the 1980s and 1990s, religion was starting to develop in Somalia. When my mother was thirteen years old, people used to wear thin materials that practically show cased their whole body. And my grandmother used to have her hair out in an afro as wells as wearing pants. At that time, people didn’t criticize women for hanging out with their male friends. It was not a big deal in the culture. For this project I interviewed my mother, who as I got older, helped me learn more about my culture. Whenever my mother would tell me stories of her teen years, I would always complain about why she was so judgmental of how I dressed. In the interview, she explained to me that people didn’t know much about religion back when my grandmother was young. So there weren’t that many rules to enforce upon them, unlike us who are very much educated about religion.

As my mother continued and talked more about our culture, I realized that my culture is influenced a lot by religion, but that doesn’t necessarily mean that every aspect about the culture comes from religion. Similarly, the school I went to, my neighbors, and everything that surrounded me consisted of religion. For instance, during the weekdays I went to school, and during the weekends I went to another school that was a religious study. Other than the American culture, the thing that ties a lot of people to their culture is religion, because I’ve learned over the years that a lot of cultures are strict because they mix their religion and culture together; so that it becomes easier for them to handle. Above all, when I came to America, I quickly learned to maneuver between the culture I was raised in and the culture that surrounded me. I’ve learned to manage between both, so that I don’t forget my roots, yet still manage to stay in the one I came into.

It’s tough maintaining between both, because they’re both so completely different. In the American culture, I learned to be independent and to voice my opinions, so that I can live the life I want. In contrast, in my culture, I wouldn’t be able to voice out my opinion so easily and openly. In essence, looking back in my life, I realized that the cultures I was raised in have shaped my life and made me the person I am today. Although there are many things that I personally don’t agree with in each culture, at the end there the reason I have grown into the open mined human being I am. Each culture has its positives and negatives. In the Saudi culture, I learned responsibility at a young age, but it was a lesson well learned, because you don’t see a lot of twenty- one year olds who are so aware of their life and the choices they make. Moreover, I learned that being multicultural teaches you and gives you the opportunity to look at life differently.

Most people grow up in one culture, and they only have the views they’re presented to them. But moving around, taught me that there are other ways to look at this world. Every culture has an opinion on how this world should function, and being able to represent few cultures gives me the opportunity to voice out an opinion that has some background roots to it. I not only represent the culture I was born into, but I represent that ones I was raised into. I’m not only multicultural educated, but I’m also multilingual. Being raised and exploring other cultures also gave me the chance to speak more than one language. In addition, I speak three languages: Arabic, English, and Somali. Over the years, I’ve struggled with figuring out who I am, because unlike everyone else I didn’t grow up in one place.

That may seem like a downside, but I gained values and lessons that I can carry throughout my life. I gained cultural experience between the cultures, and I gained religious knowledge, and lastly I gained how to communicate with individuals outside my culture. With all of that, I gained the knowledge of knowing who I am, and where I’m from. We don’t know how tied where are to our roots and ethnicities until you learn to explore other cultures around you. There are people around us that are so close minded of the world, and what it offers that they continue to purse being ignorant of others around them. If we pursue our surrounding and environments, we begin to go on a road full of fulfillment that leads to discovering more about our inner selves.

Cultural Autobiography of a Person from Saudi Arabia. (2016, Aug 16). Retrieved from https://studymoose.com/cultural-autobiography-of-a-person-from-saudi-arabia-essay 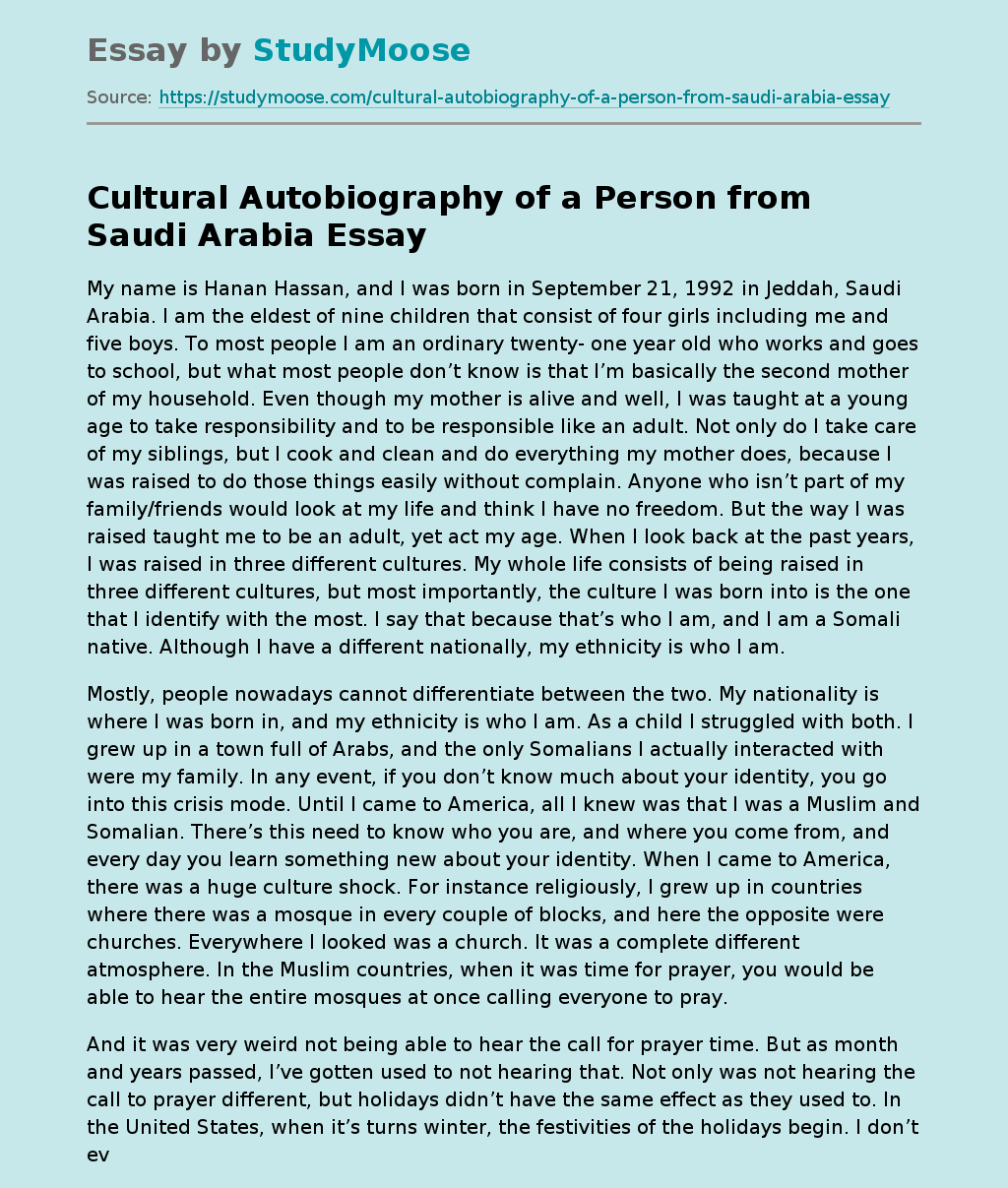