The Crucible do we admire Hale and despise Parris

Over 300 years ago in the American state of Massachusetts, the witch trials began (in 1692) and lasted only a few months before coming to an end in the following year. It is this series of events in which the famous play “The Crucible” by Arthur Miller was based upon written 56 years ago. In this play there are 2 very different characters two reverends, Samuel Parris and John Hale. In this essay I am going to talk about these two characters, their actions and moods, and compare them.

Don't use plagiarized sources. Get your custom essay on
“ The Crucible do we admire Hale and despise Parris ”
Get custom paper
NEW! smart matching with writer

I will be trying to get across how we admire Rev Hale and despise Parris. At the beginning of Act 1 we see Reverend Parris at the side of his daughter’s bed, with Betty in it. He is praying for Betty, “Oh my God, God help me. ” However, I think it becomes clear he is concerned for himself. Right from the beginning Parris cares for himself, he wants his name to be good, and wants to save his skin, this is similar to McCarthyism where America fought to save itself.

Parris comes across in a sad way and the words used in the opening give a feeling of sorrow; “out of my- (he is overcome with sobs. ) Miller has done this to make the audience feel sorry for him but over the course of the play this changes greatly and the true nature of Parris is revealed. However, Hale comes across very different than this at first. Miller tries to make the audience think that Hale is a highly skilled individual with power and authority who will have a big impact and sort out the people’s problems.

Miller makes this clear with examples like “He feels himself allied with the best minds in Europe” and he says those of “Kings, Philosophers, scientists and ecclesiasts of all churches” Another example is the use of words like “intellectual, respectable, and eager”. Right from when Hale enters the town of Salem, he attempts and succeeds in maintaining a high position (at first) and tries to come across as though he has power over Parris. “Mr Hale! Oh!

It’s good to see you again” Parris says and immediately the reader gets the impression that Parris is sucking up to Hale and trying to gain his sympathy and kindness. (note at the beginning of this opening line the effect of the stage directions (delighted) also gives this impression) He then takes some books off Hale and comments on how heavy they are. Hale then replies “They must be, they are weighted with authority” to try and scare Parris a little in which he does as we can see by Parris’ reply – “(a little scared) Well, you do come prepared! ”

Hale then attempts to bring Betty back but doesn’t succeed doing this. He obviously knows that there is something wrong with her and it is abnormal but jumps to no conclusions that witchcraft is involved; “We cannot look to superstition in this”. However, Hale does go on to prove what the people of Salem thought in that witchcraft is present. Later on in the scene Parris seems to forget about her daughter Betty and nothing is mentioned in a while, one example being the small argument over his salary; “I regard that six pound as part of my salary”.

This is another demonstration about Parris’ selfishness and that he wants the best for him. He puts himself, his money, name and other small things before his own sick child! This is a reason to hate Parris. He also even lies for the good of himself an example being “A wide opinion’s running in the Parish that the devil may be among us, and I would satisfy you that you are wrong. ” However of course he knows that he is lying and that this witchcraft is actually true.

The Crucible do we admire Hale and despise Parris. (2020, Jun 01). Retrieved from https://studymoose.com/crucible-admire-hale-despise-parris-6391-new-essay 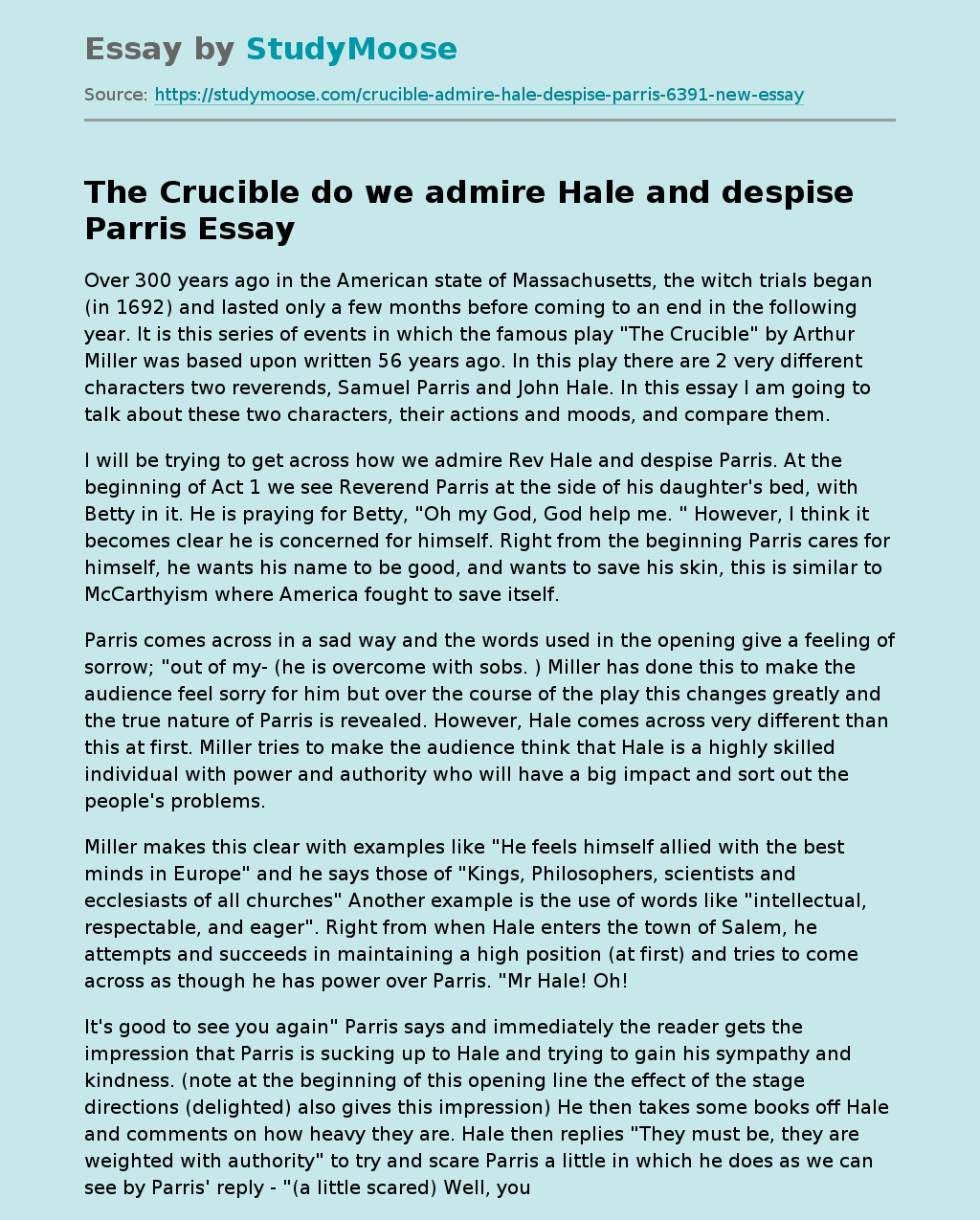