In Arthur Miller’s, The Crucible, when characters are faced with adversity, they are forced to show their true morals and beliefs. The character of Reverend Hale fights a battle between what ideasl have been engraved in his mind by books and society, and what he feels in his soul is truly right. In the end his soul prevails and finds him completely changed. Because he is a character with such high moral standards regarding everything he does, he sees the flaws and falsities of the witch trials and changes from naively believing completely in witchcraft, to losing all faith in the religion of Salem and deciding that earthly life is superlative and worth lying for.

Don't use plagiarized sources. Get your custom essay on
“ The Crucible: Reverend Hale ”
Get custom paper
NEW! smart matching with writer

At first, Reverend Hale’s character is concrete in his beliefs on witchcraft and is sure of his duty to carry out the will of God. He has dedicated his whole life to the Puritan religion and learning about witches and witchcraft. In this call to Salem he sees his first opportunity to put his knowledge and dedication to work.

When introducing him, Miller describes Hale as, “a tight skinned, eager-eyed intellectual. This is a beloved errand for him; on being called here to ascertain witchcraft he has felt the pride of the specialist whose unique knowledge has at last been publicly called for” (32). Hale enters in a flurry of activity, carrying large books and projecting an air of great knowledge.

He becomes the force behind the trials, passionately searching out the evil among the people in Salem, and putting all his efforts into redeeming them.

What is more significant about Hale’s character in this early part is not his actions, but motives. His motives are always for the good of the people and what is right to God. This goodness is what leads to his transformation because it helps him to see the true good and evil when others are blinded by their pride or ulterior motives.

As more and more people are convicted, Hale begins to doubt himself. His inner conflict builds with every person accused and convicted, because he senses the innocence of these people. He has trouble believing that characters such as Rebecca Nurse and Elizabeth Proctor could possibly be involved in witchcraft. His doubts are assured and solidified when he witnesses John Proctor accusing Abigail and the other girls of lying. Speaking to Danforth about his doubts on the accusations, he says, “I dare not take a life without there be a proof so immaculate no slightest qualm of conscience may doubt it” (99). And then when talking about having to convict Rebecca Nurse, he says, “I’ll not conceal it, may hand shakes yet as with a wound!” (100).

These two quotes show how Hale’s character shows increasing doubt on something which he at first very adamantly believed. He senses more and more the falsity of the girl’s testimonies, and when John Proctor testifies, Hale realizes that he can no longer deny his suspicions. It becomes obvious where the truth lies, but out of all the officials of the court, only Hale is able to denounce his past beliefs and let go of his pride.

Although Hale succeeds in finding the truth and redeeming himself, he is helpless to take action against the court. This makes Hale lose all faith in the law. He dismisses himself of his position in the court, and when he cannot expose the proceeding as a sham, he finds himself begging those accused to confess to the crime and therefore save their lives. Hale goes from being a “tight-skinned, eager eyed individual,” to being broken by his failures and the deaths that he is in some ways partly responsible for. Although he comes to a state of despair, Hale does not give up in helping the people which he once convicted. Because this play is a tragedy, Hale fails in saving the lives of the heroes, but Hale’s change is significant because it shows how in some cases goodness will prevail.

In his transformation, Hale becomes a character that is good, but not quite as strong as the heroes in the play who choose to die rather than lie. Although Hale recognizes the evils of the witchcraft trials, his response is not defiance but surrender. Because he cannot stand to see these good people die because of the pride and vengeance of others, he gives to injustice and insists that survival is the highest good. When Hale comes to try to get the accused to confess, he states, “I come to do the devils work. I come to counsel Christians they should belie themselves . . . can you not see the blood on my head” (131). He states with a little sarcasm that he is now to commit a sin by getting these people to lie, yet is still doing it for the good because the witch trials have all completely been a lie.

Hale has lived his whole life following the book and being a true Christian, but because he becomes so discouraged from the witchcraft trials, he finds himself wanting only for these people to live, no matter if it is a mortal sin. He also says that, “God damns a liar less than he that throws his life away for pride”(131). Although the people who decide to die rather than confess are doing it for reason other than pride, Hale comes to believe that nothing, good or bad, which has come from the trials is worth dying for. In his transformation, he comes to believe that earthly life is a greater gift that eternal life.

Hale is a remarkable character. For any person to have the strength to give up something they have believed their whole life takes courage, as well as having to give up all of your pride. With Hale doing this, he becomes broken and gives in to surrender and injustice in order to save lives. Hale is completely transformed by the trials, and the only substantial part of Hale that does not change is his desire to do good; what does changes is how he vies what “good” may be. Because he believed so vehemently in what he was doing before, once he opens to the truth he loses all faith in things he believed before, such as the law and in some ways religion.

Because of Hale’s innocent character, he cannot stand to see other innocent people die because of a lie, and decides that it is most important that they save their lives. Hale’s character goes through all these transformations because of his motives in his life. Because he is motivated by doing what is right and fair, he is able to see the falsity in the trials and become dedicated to saving the lives of those who were innocent. 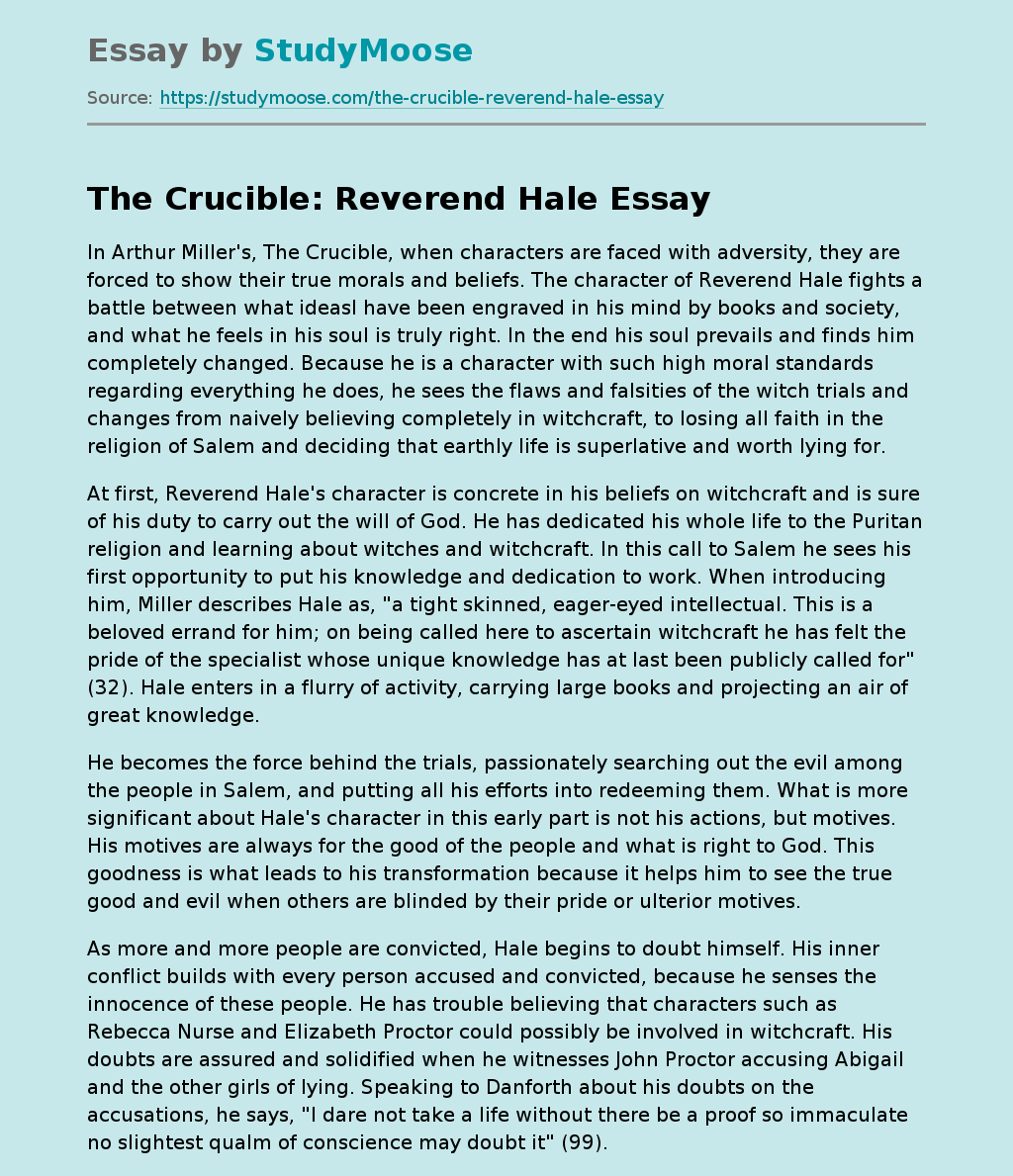