Nicholas Cage once said that, “I like flawed characters because somewhere in them I see more of the truth.” This quotes means that characters are much more unrealistic when they are perfect. Characters with flaws give the reader a more accurate view of humanity because all people have flaws.

The short story “The Scarlet Ibis” by James Hurst and “The Cask of Amontillado by Edgar Allen Poe are two works of literature that support this quote. In both of these works, it is evident that the two main characters from both stories both have very tragic flaws.

These make the story more interesting to read because after reading it reveals the true nature of mankind. “The Scarlet Ibis” by James Hurst shows that the narrator of the story has tragic flaws and being embarrassed of his disabled brother so he teaches him to walk. This short story is about the narrator trying to teach his disabled brother Doodle to walk because he is embarrassed to be related to someone who cannot walk.

The author’s use of Characterization and conflict help to set the mood of the story.

These literary elements help set the mood of the story which makes it more interesting to read as well as showing we can get too much pride over something. In conclusion an imperfect narrator or one with tragic flaws makes the story more interesting to the reader. It also reveals truth that people do not think of the consequences of what they are doing.

“The Cask of Amontillado” by Edgar Allen Poe shows that the narrator of the story wants to finally get his revenge on a man who has pride in his wine. This short story is about a man who wants to seek revenge on his friend Fortunato because of his great pride in wine. This short story supports the quote “I like flawed characters because somewhere in them I see more of the truth.” Because the narrator of the story wants to seek revenge on a man named Fortunato by using reverse psychology to get his drunk and then murdering him.

Everything in the story was planned by the narrator. The author’s use of setting and suspense helped the reader feel like they were in the story as well as makes it more interesting and reveals the truth that all humans are all revengeful at some point. In conclusion the narrator of this story is imperfect which makes this story more interesting. In conclusion, the quote by Nicolas Cage “ I like flawed characters because somewhere in them I see more of the truth.” means that characters are more realistic when they are not perfect. The titles “The Scarlet Ibis” and “The cask of Amontillado” both support this idea. 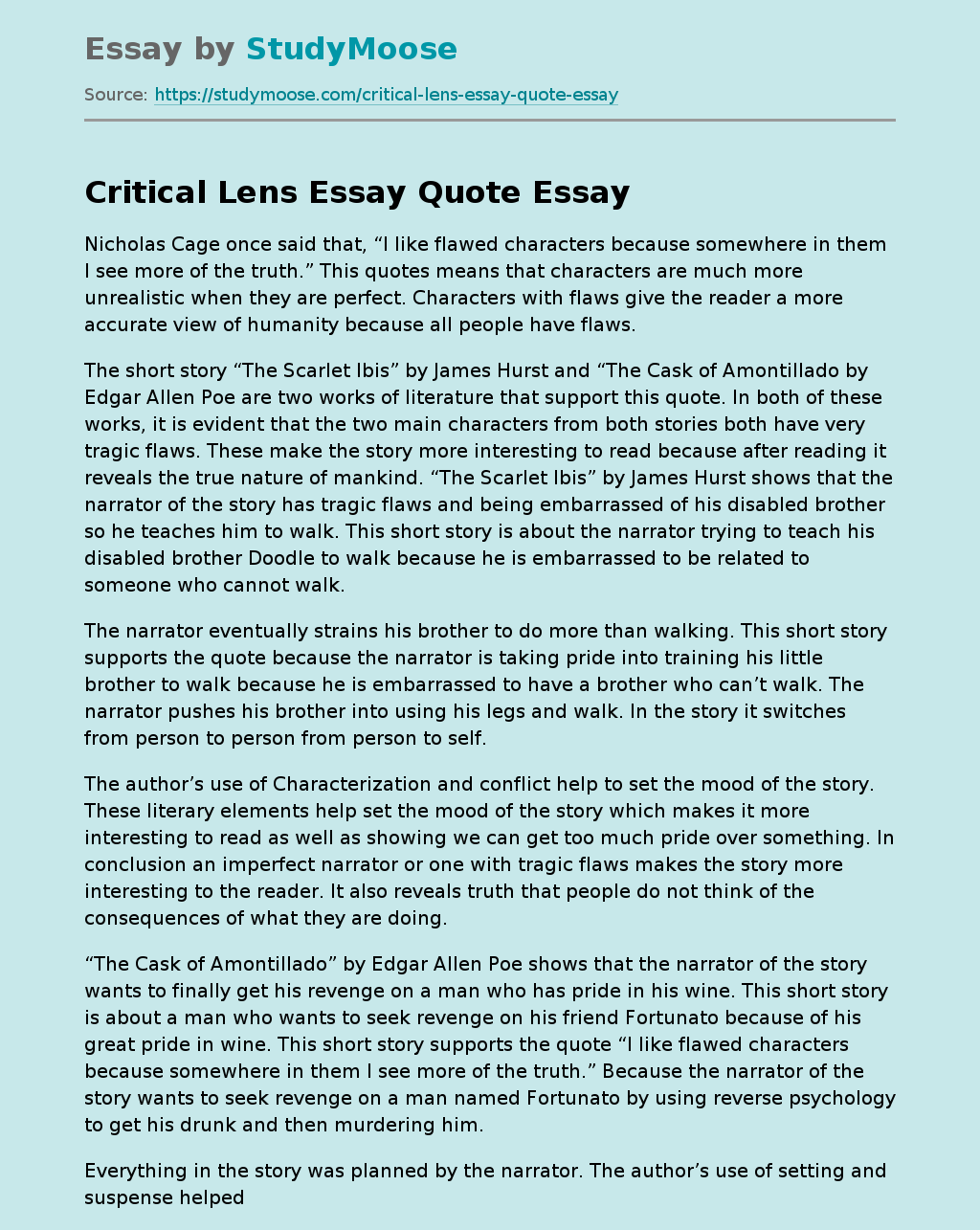