Critical Analysis on “My First Son” by Ben Johnson

As a tribute to his son’s death, Ben Johnson wrote the poem “On My First Son” to show his great love for him. In the poem, Johnson indirectly blames himself for the death of his son in a rhetorical way. Seven years of raising his son gave Johnson so much hope which ended really soon with his son’s death. His son’s death caused him to suffer from too much agony and lamentation. Johnson has arguments on the poem which were an attempt to analyze the meaning of his son’s death and how the plans that he made in preparation for his son’s future ended in an instant.

Johnson considers his son as the “best piece of poetry” (Johnson) for him which is best described by the words on this poem. The poem speaks about father-son relationship as a whole. It has a straightforward structure that best describes the emotion of the poet. Specifically, it talks about the love and grief of Johnson when his son died.

Losing his eldest son was really hard for him to accept. Although he argued on the poem that through death, his son was able to escape aging and suffering, he comes out with a conclusion not to love too much in order to let go of a loved one who died.

By going through each line in the poem, this paper aims to analyze how Ben Johnson put into words what he felt regarding his first child’s death. Contrasting words were reflected in this poem which shows the readers the mixed emotions that Johnson felt.

He conveyed his feelings of sorrow but later on contradicted it by saying that he should be happy because death brought his son to a better place. Johnson is speaking for himself in the poem. Being a devout Christian, he allows readers to contemplate on how they should envy the state of his son.

His son’s death led him to a state of God’s keeping. The poem was written in such a way as if Johnson is talking directly to his son. The poet tries to put into words his intense feelings about the death of his son and how he regards his son as the most precious person for him. Talking face to face with his son, Johnson tells his son how he values him using the words “child of the right hand” (Johnson). This suggests his son’s great worth to him. As a good writer, he also tries to express his frustration of losing his heir who can to continue his work.

Looking on the religious side of the author, he highly relates the state of his son the way that Jesus is looked upon as the right hand of God. Johnson values his son as his supposedly right hand who vanished early in time. The second line talks about the poet’s fault as he has placed hoped too much on his son and on what lies for him in the future. The poet also realizes in the poem that everyone’s life is a loan from God which will be taken back through death. Too much hope for his son paid off after seven years through death “on the just day’ (Johnson).

This is a metaphorical phrase saying how each people really belonged to God. The fifth line of the poem tries to explain how Johnson wanted to stop being possessive as a father to his son. He wishes to give up being a father to his dead son since he is trying to convince himself that the boy is better off dead. He argues paradoxically why there is a need for lamentation. He points out contradictions through the line “Will man lament the state he should envy? ” by explaining that there is no need for him to grief because his son is already in heaven.

Convincing himself that he should let go of his worries is the main point of this line. Johnson wants to deliver the idea of how his son was able to escape the difficulties of life in this line: “To have so soon ‘scap’d world’s and flesh’s rage, And if no other misery, yet age” (Johnson). By dying young, his son would no longer go through the difficult and miserable experience of growing old. Johnson wants to clearly deliver this message by saying how his son was able to escape this cruel fate. In the last four lines, Johnson honors his son.

He commemorates his son’s death by saying that he is now in a state where he can “Rest in soft peace” (Johnson). Johnson casts all his doubts and fears on his son’s death because he fully entrusts the fate of his son to God. Being a notable writer he honors his son as “his best piece of poetry” (Johnson). This is a reflection of how much he loves his son and values him more than anything he wrote. In conclusion, the last two lines of his poem were written as an advice for himself on clinging too much on people and his writings: “For whose sake henceforth all his vows be such, As what he loves may never like too much” (Johnson).

These lines imply that he should not be too emotionally involved with the things that he loves because it will be too painful when he loses them. To end the poem, he expresses his idea on how his great love for his son caused him death because loving too much is a sin. Johnson wanted to move forward and be more optimistic that whatever he loves next, he will not love it “too much”. The poem wants to address the author’s own meditations. Through the poem, Johnson gave his son’s death a clearer meaning. Ben Johnson wrote the poem from a father’s point of view.

He wanted the readers to be aware of his feelings about the early death of his son and how great is his loss by experiencing death of a loved one. The poem reflects his affectionate side as a father. At the same time, it is mixed with satire in order to give more artistry and better understanding in determining life’s extremes and hardships.

Critical Analysis on “My First Son” by Ben Johnson. (2016, Aug 29). Retrieved from https://studymoose.com/critical-analysis-on-my-first-son-by-ben-johnson-essay 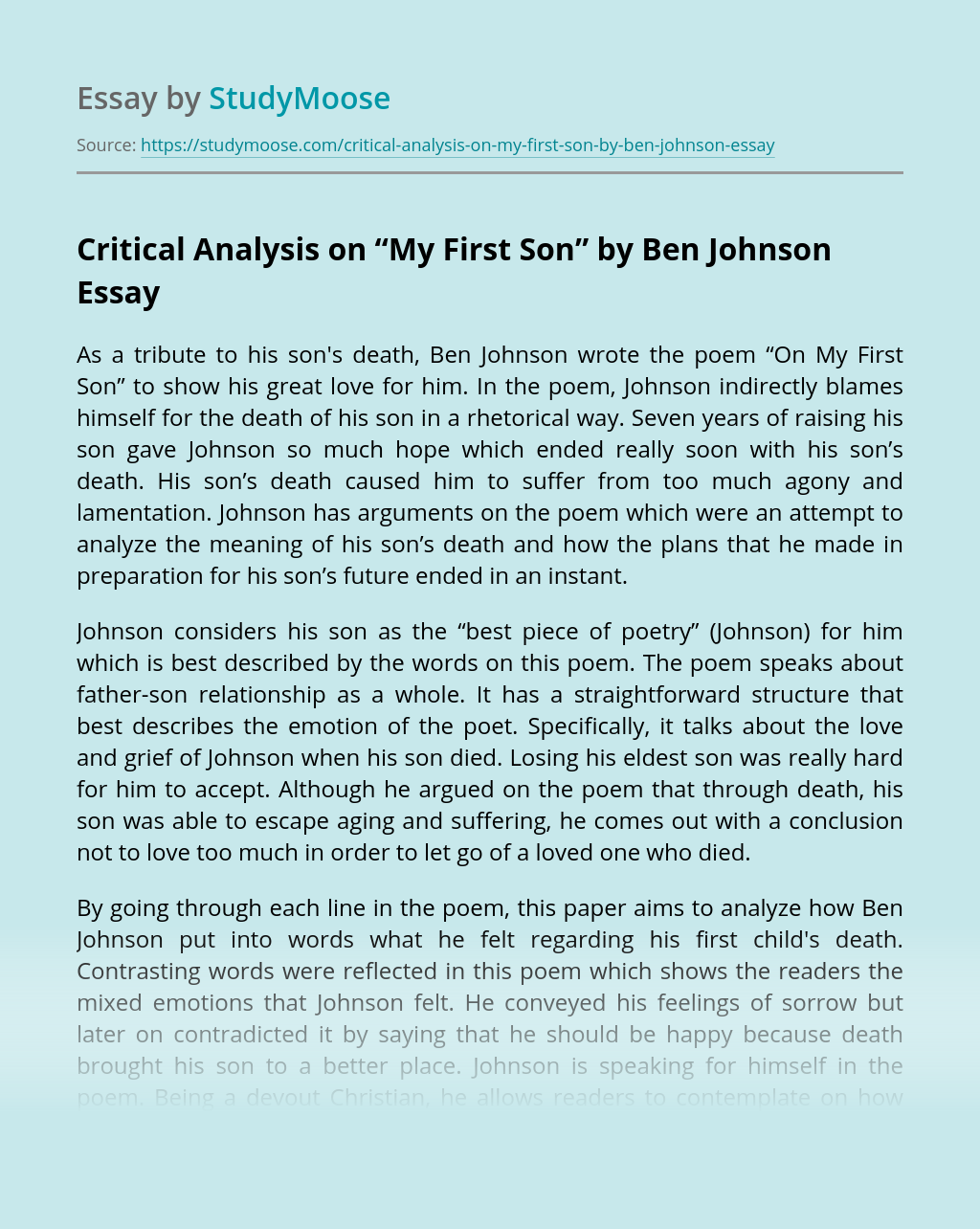 Get Essay
About "Relic" By Ted Hughes

Although nature may be seen as a beautiful way in which different living creatures coexist, Ted Hughes however sees this differently. In the poem Relic he writes about how the creatures in the sea use each other as a means to their end. In this poem, the persona has found a jawbone on the sea...

The Literary Elements of “Annabel Lee”

Contrasts between Poems Exposure and Breakfast

Exposure gives the reader a diminutive view of the front line based on Wilfred Owen’s experiences in the winter of 1917. Wilfred Owen repeats four times in his poem ‘Nothing happens’ – nothing except tiny changes in the time of day, the weather and the progress of the war. The men appear trapped in a...