In “Enduring Love”, McEwan again creates a family that confronts a challenge and finds it difficult to survive. Joe and Clarissa are intellectuals living together in a well-appointed flat in a comfortable neighborhood in London. Clarissa is a professor researching Keats, and Joe is a well-known science writer with a doctorate in quantum electrodynamics who is somewhat dissatisfied with his decision to leave academia behind. Through the story utilizing the characters of Joe and Clarissa, McEwan articulates the idea humans are emotionally and intellectually evolved and are therefore less fit for survival than animals.

Don't use plagiarized sources. Get your custom essay on
“ Critical Analysis Of “Enduring Love” ”
Get custom paper
NEW! smart matching with writer

Joe and Clarissa have figured out how to retain their individual identities within the relationship, so that they do not feel guilty that they lead separate lives, and do not become parasitic when they are together. Joe and Clarissa are aware of their individuality, and ultimately their relationship entails a defense against enmeshment, a protection of self against the encroachment of others, as a primary motivating factor.

In the end it is their insistence on “me” over “us” that renders their connection vulnerable to withstand the challenge of obsession and madness from an outside source.

In the novel’s celebrated opening scene, when Joe and Clarissa witness a hot air balloon in distress, Joe attempts, with several other men, to rescue the terrified boy inside the basket by pulling the balloon back to earth. The experience is undeniably traumatic. Joe’s guilt at letting go is overwhelming, and the sight of the dead body haunts him. Back at home, Joe and Clarissa comfort and support each other, cooperating in each other’s recovery by talking through the event and their feelings, and trying to work together to make meaning of it.

McEwan is careful to show that their initial reaction to the trauma appears to reinforce the solidity of their relationship. It is an appropriate, mutual, and affiliative response. Clarissa recognizes Joe’s feelings and tries to help him: “‘ We’ve seen something terrible together. It won’t go away, and we have to help each other. And that means we’ll have to love each other even harder'” (McEwan 36). Moreover, Joe appreciates Clarissa’s efforts and feels delivered from his trauma by the physicality of her love: “she put her arms around my neck and brought my face close to hers.

She knew I was a fool for this kind of encirclement. It made me feel that I belonged, that I was rooted and blessed” (McEwan 37). But for the reader, the event’s revelation of Joe and Clarissa’s relationship resonates on another level as well. Joe’s reflections on the nature of the cooperative effort enacted by the group of men can equally be applied to his relationship with Clarissa. He is remarkably aware, both during and after the event, of the extent to which human interaction is governed by a weighing of benefits, a balancing of pros and cons: “Selfishness…

is our mammalian conflict: what to give to the others and what to keep for yourself. Treading that line, keeping the others in check and being kept in check by them, is what we call morality” (McEwan 15). And, in the end, it is this constant hedging, this instinct to protect the self at the expense of risking connection with others, McEwan says, that dooms both the rescue and the relationship: “Someone said me, and then there was nothing to be gained by saying us… Suddenly… we were disintegrating.

Suddenly the sensible choice was to look out for yourself (McEwan 15). In a sense, the extent to which Joe and Clarissa’s relationship is more of a compromise than a connection finds its expression in Joe’s astute observation about the men: “There may have been a vague communality of purpose, but we were never a team” (McEwan 11). With the metaphor of the balloon accident, McEwan implies the necessity for Joe and Clarissa to face the same choice as the rescuers – to let go and survive, or die.

The audience is aware from the start of “Enduring Love” that the veneer of togetherness in this family belies a strong undercurrent of disconnection. To begin with, the reunion picnic is necessitated by the couple’s six week separation while Clarissa has pursued her own research abroad, leaving Joe home alone. Perhaps even more of a signal to the reader, however, is McEwan’s refusal to clarify the exact nature of Joe and Clarissa’s relationship.

As the narrator, Joe describes his relationship with Clarissa as one of marriage: “We were seven years into a childless marriage of love” (McEwan 8). But then he refers to Clarissa not as his wife, but as his friend: ‘”Look, I’m sorry, I’m going back up to see my friend'” (28). Later, when he is talking to the widow of the balloon accident hero, he says it again: “I shook my head. There was my friend Clarissa, two farm laborers, a man called –“‘ (McEwan 122).

It is significant that McEwan will not allow the consistent use of the word ‘wife’, even for the sake of convenience, and his refusal to do so comments on this couple’s lack of a formal commitment to connection. From the critical perspective and comparing to humans to animals in terms of the organizational system, Joe and Clarissa have learned to mediate conflict by focusing on the defects and failings of the partner. In a sense, McEwan implies, Joe and Clarissa’s relationship has always been about competition.

In particular, Joe’s decision to give up “real science” for popular science puts him at a disadvantage with Clarissa, a promising scholar with a place at a university, who has a famous scientist as a Godfather. Moreover, their relationship is illuminated by the conflicts inherent in their chosen fields-the objectivity of science and the subjectivity of the humanities. Despite their mutual instincts for connection, and their evident love for each other, Joe and Clarissa have not, as a family, internalized a regulating dynamic by which the closure of their family can be defined and maintained.

Unlike animals, Joe and Clarissa as humans are complex and evolved human beings that are reliant on comfort and habit rather than intimate dedication to each other, as evidenced by their readiness to turn the tension of the event onto their relationship rather than absorbing it together. As such they are less fir fit survival in a broad context and are vulnerable to inside and outside threats to their integrity. 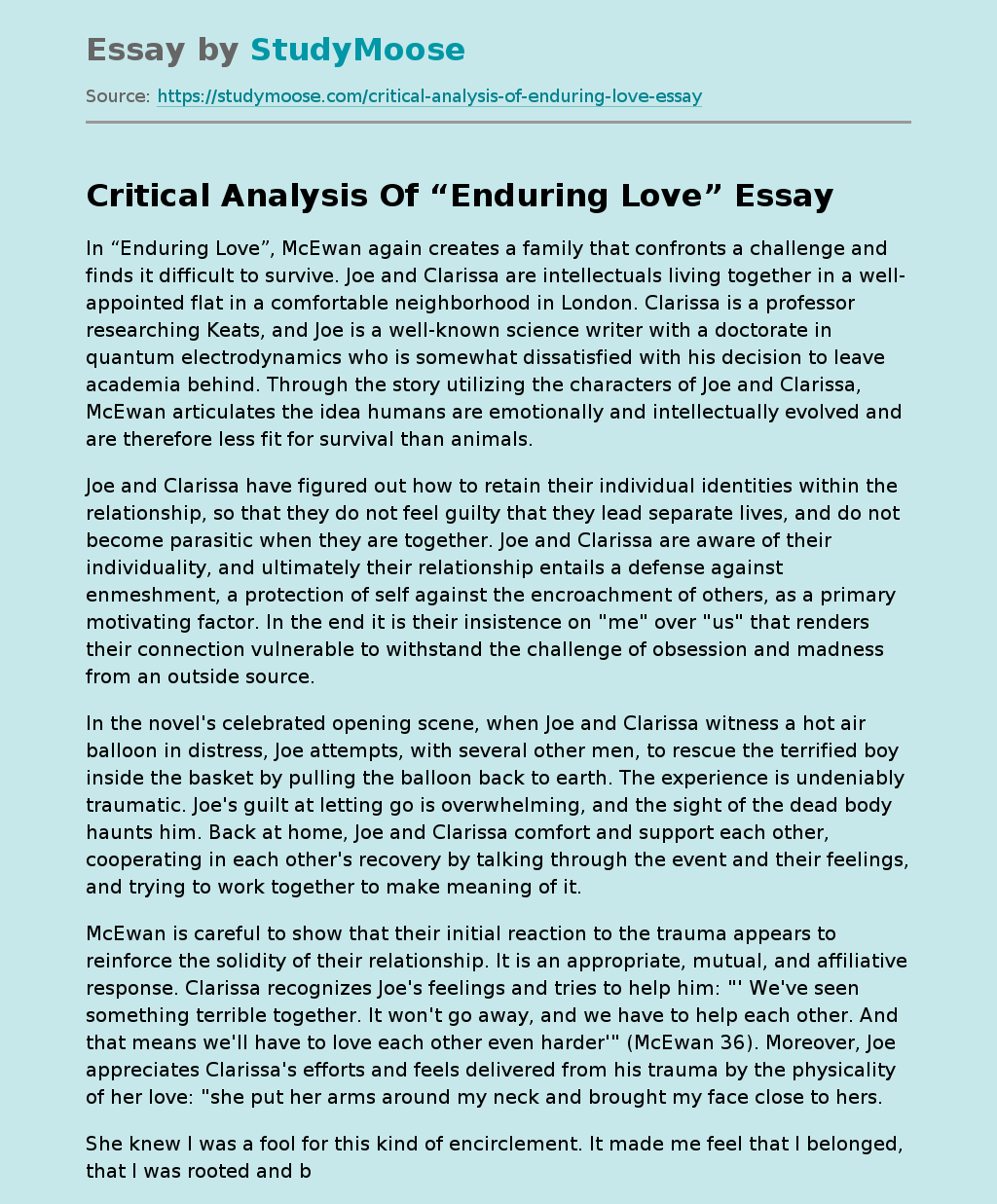