Critic of the Application of Frederick Herzberg’s Two-Factor theory in Assessing and understanding employee motivation at work: a Ghanaian Perspective

Critic of the Application of Frederick Herzberg’s Two-Factor theory in Assessing and understanding employee motivation at work: a
Ghanaian Perspective.
Patrick Ashiadey

The Frederick Herzberg Two Factor Theory has had a considerable amount of practical and as well as theoretical influences. In fact, from a practical perspective, the influence of Herzberg’s motivation theory can be seen at every organizational level as well as within every department. From a theoretical perspective, Herzberg’s motivation theory can be perceived as having similarities to Maslow’s Theory of Need with the exception that for Herzberg’s theory, the needs aren’t placed in a progressive continuum, rather they are divided into two independent factors.

Don't use plagiarized sources. Get your custom essay on
“ Critic of the Application of Frederick Herzberg’s Two-Factor theory in Assessing and understanding employee motivation at work: a Ghanaian Perspective ”
Get custom paper
NEW! smart matching with writer

Herzberg’s motivation theory emerged from a collection of data gathered by the interview of 203 accountants and engineers within the Pittsburgh area. The interview process consisted of asking the respondents to describe a work situation where they felt very happy as well as very unhappy.

These descriptions were to include as many details as possible, including their feelings, the interpretation of the situation as well as the events that are suggestive of a change.

The analysis of the responses confirmed the proposed hypothesis, where some factors where contributors to job satisfaction, while others were not. In addition, some factors were noted to be a source of dissatisfaction when absent. These were categorized as “Motivators” and “Hygiene” factors, the latter also being referred to as Maintenance Factors. (Wikipedia, 2013). Employee motivation in Ghana however takes on a different turn due to many factors that flaw the two factor Theory.

This white paper seeks to discuss but a few of these factors. Firstly the difference in cultures and upbringing of the typical Africa especially the Ghanaian worker right from infancy to the work age differs from those used in the interview process as they are from entirely different geographical areas. The average Ghanaian lives on or below the poverty line and as such will be happy just having a job with his basic salary regardless of the existence of motivators or hygiene factors. The mentality of the average Ghanaian worker makes him fear joblessness as other forms of employment are hard to come by and that alone will motivate him or her to stay in the job in the absence of motivators or hygiene factors.

That is the theory does not take into account individual personality traits that could provide a different response to a motivator or hygiene factor. The Theory also lacks in the understanding of the inter-relations between some of the motivators which I totally agree with as can be seen from http://www.leadership-central.com/two-factor-theory.html#ixzz2g2Bs3nao in comparison to the dual structure theory. Example, one might receive adequate job recognition nut he or she may not be satisfied with the level of responsibilities therefore one would question the internal motivational value of job recognition for the individual. Lack of highly skilled personnel in the Ghanaian job market, makes the average Ghanaian worker dependent upon his or her professional level which would be more or less sensitive to one or the other of the factors. Frederick Herzberg’s sample space for his research included 203 accountants and engineers, a huge disparity from the large population of Ghanaian workers in the public sector who were only recently introduced to the single spine structure. Responses to the same questions posed to the accountants and engineers that led to the development of the theory would have produced different results as what mattered to a worker in the US would not necessarily have mattered to a worker in Ghana like recreational facilities.

This leads us to the point where hygiene factors and motivators vary depending on the types of individuals involved and the nature of work examined. There is also the case where there exists no prove that highly satisfied people are also high performers per a research done on the internet. Example is the average Ghanaian worker in the public sector enjoying the new single spine salary structure still requiring some form of extra cash for him or her to carry out his or her civil duties. All said and done, it is a well-known fact that the Application of the Two Factor Theory is definitely well established within organizational settings. In fact, every leader has the responsibility to ensure that their employee’s hygiene factors are attended to and that proper motivators are implemented to increase job satisfaction.

The most common mistake committed by leaders is to attend to the hygiene factor while expecting employee motivation. One application for Herzberg’s theory of motivation that isn’t well known is its importance in managing quality. A great paper by Heinz Weihrich shows the link between the Two Factor Theory of motivation and quality. He equates the reliability or “R” factor of a product as being the hygiene factor and therefore customers have grown to expect products they purchase to be reliable. The “S” factor, the motivator, refers to the product features.

Critic of the Application of Frederick Herzberg’s Two-Factor theory in Assessing and understanding employee motivation at work: a Ghanaian Perspective. (2016, Apr 22). Retrieved from https://studymoose.com/critic-of-the-application-of-frederick-herzbergs-two-factor-theory-in-assessing-and-understanding-employee-motivation-at-work-a-ghanaian-perspective-essay 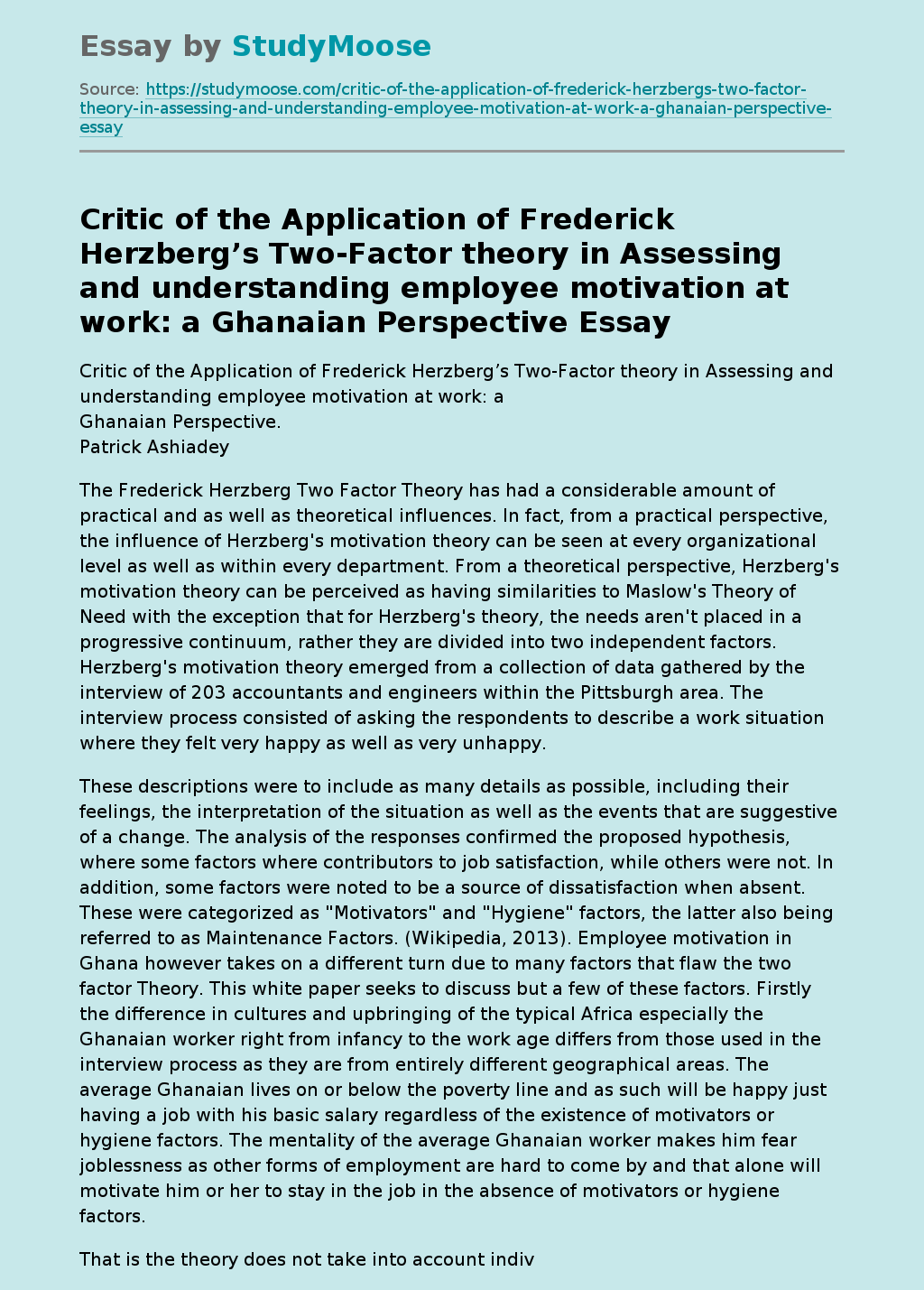