Honesty is a character trait that is difficult to uphold when faced with moral dilemmas in the workplace. This is the challenge of Frank Serpico in the film Serpico. An analysis of the film “Serpico” leads to the realization that “All power tends to corrupt and absolute power corrupts absolutely” is completely valid. The movie “Serpico” demonstrates that the merit system and an outside agency are necessary to prevent systemic corruption within the Justice System. Systemic corruption appears to be facilitated, encouraged and protected by the “code of silence”.

Turn in your highest-quality paper
Get a qualified writer to help you with
“ Crime and Corruption ”
Get high-quality paper
NEW! AI matching with writers

For example, officers are taught by fellow officers how to use the authority given to them to advance the sub-culture of crime. This fact is a matter of debate. The question of crime in police departments is often blamed on unethical officers rather than the truth of the officers who are taught by superiors and veteran officers the means of crime. The bad apples or bad system debate is expressed in Serpico, indicating the confirmation that a bad system needs an outside agency to correct it.

This movie begs the question “Who was keeping an eye on the keepers of the peace among the New York Police Department?

The instrument of change in the movie is Frank Serpico making him the antagonist. The protagonists are the dark and corrupted of officers, and the supervisors who by omission participate in crime. The ideology that has perpetuated this systematic corruption is the promoting within the ranks based on who you are not what you do.

In Serpico, it seems that the supervisors were very astute in the process of looking the other way. For this ability, they moved up among the chain of command. The distinct officer “code of silence” provided the cohesion that veils the subculture of crime perpetuated by the officers.

In the film, Frank Serpico’s only flaw was being an honest cop. In “Serpico” the minimization and neutralization of corruption becomes the justification for the actions of the officers who are unethical. This is the attempt to rationalize the acceptance of the blanket loss of ethics among the officers. Frank Serpico does not participate in the corruption and refuses to take the money offered to him. His complaints are ignored as he goes higher and higher up the chain of command. The result of the complaints by Frank Serpico created an even more hostile work relationship with the other officers.

The officers ostracize, threaten and fail to protect Frank to the point that leads to his injury. The atonement for the deeds of the police appears to be around the corner with every complaint lodged against the department, yet Serpico becomes placated in each meeting and by every supervisor, including the mayor. Political tolerance to corruption with no legal controls in place to prevent the un-ethical police sub-culture is unacceptable. The epiphany of Serpico is that the systemic corruption creates the need to go to an outside agency. This action of going to an outside agency is not taken lightly in the film.

Frank Serpico knows and displays regret for the violation of the “code of silence”. He is aware it is a trespass on the brotherhood. He has two other officers collaborate his story. Serpico feels that he must go to an outside agency to correct the corrupt and ethically bankrupt police department. This exposure allows for the creation of the Knapp Commission, which is evidenced at the end of the film Regoli and Hewitt reveal in Exploring Criminal Justice that the New York Times series on police corruption prompted Mayor Lindsay to appoint five people to investigate corruption in the NYPD.

The mafia is controlling the civilian sub-culture and the corrupt police controlling the police sub-culture leaving the citizens at the mercy of criminals, and no one is watching. Serpico stood against this systemic organized corruption in long-suffering, personal sacrifice with hardship. Vindication for Frank appears in the finality of the film with him testifying to the Knapp Commission. According to Gaines and Kappeler, the result of the Knapp Commission was the convicting of the 20 officers charged with felony crimes that included armed robbery, assault and murder.

To protect and serve aspect of policing does not include murder. This is a grievous trespass on the public trust given to officers, as are any violations of the law by the officers against the citizens who submit the authority to the law. The Knapp Commission exposed the corruption and sought out the officers for criminal prosecution. The results of Serpico have been far reaching. For instance, according to Gaines and Kappeler in Policing in America “Twenty years after the Knapp Commission’s findings, the issue of systemic police corruption was revisited by the Mollen Commission.

Although NYCPD commissioner Kelly denied systemic corruption, the commission uncovered substantial evidence of this form of organized corruption” (Kappeler, 2008). These commissions are necessary to investigate and dissolve the corruption within police organizations. The anthropological perspective of police behavior can be used to explain the immoral behavior found in the police culture. Officers become shaped and influenced by the police culture. The rookie officers learn from the older corrupt officers.

This in turn can demonstrate the values of the whole department, although there may be a distinct subculture that is not made privy to the department as a whole or to the public. Empirical research from the Knapp and Mollen Commission agree with the anthropological perspective of police behavior. In Exploring Criminal Justice by Regoli and Hewitt it is stated that the “Police supervisors must admit when corruption exists and confront the problem, Furthermore, they must recognize that corruption often begins at the top and drifts downward through the ranks”.

This research is indicating that criminal behavior drifts downward to the new officers. If the corrupt officer’s argument is correct, then all of the corrupt officers selected policing to exploit it. Where is the honor in this? The authoritative personality is attracted to policing, not the ethically challenged personality. The corruption seeps in due to the influence of peer officers, and once it takes hold the distinction of ethically correct and the immoral becomes dissipated. The majority of the NYCPD was corrupt in the 1970’s.

That is a huge number of unethical people entering the field to become officers. If it were not a hero like action to stand against corruption then this movie would not have been made. Trends suggest that police departments have corruption in three ways. The rotten apples and rotten pockets type of department deals with the individual officer’s corruption (Kappeler, 2008). This is not the case in “Serpico” – the movie is demonstrating the third type of department corruption; Pervasive Organized Corruption. Pervasive is defined as existing in, or spreading through every part of something.

The term organized is referring to the hierarchical and limited or exclusive membership of the corruption. The corruption constitutes a unique subculture, perpetuates itself by violation of law, and exhibits a willingness to use illegal violence. In the naming of such findings alone as Pervasive Organized Corruption is a stinging finding of fault on the behalf of the NYPD and the discovery of such corruption brought shame to the department. The finding of such corruption exacerbated the public’s distrust and served as a means to strengthen the conflict theory.

The passive assistance the administration is giving to corruption by looking the other way is complementing and reinforcing the corruption throughout the department. The Knapp commission created in 1970 found that Pervasive Organized Corruption was in the New York Police Department. A new officer entering the department with high ideals on being ethical and a hero will soon lose this identity and assimilate the new identity of the corrupt police culture. Officers who do not conform to corruption will become the outliers among the median of a corrupt department.

Overall, “Serpico” is the true story of a New York City cop who ratted on crooked officers and suffered grim consequences. Serpico was an eccentric who, by virtue of being a good guy in an evil department, is himself a bit of an outlaw. This also will set them up for being ostracized and alone. Policing attracts people who want to be heroes; the culture of corruption found in certain departments creates the adherence to unethical practices and behavior. All in all, this creates the need for an outside agency’s oversight to protect civil liberties and whistleblowers.

Frank Serpico has become equivalent not with the term “whistleblower”, but with the term “Lamplighter”. This is an insightful suggestion due to the negative connotations of the term “whistleblower” as it takes honor and courage to place a light on the darkness of corruption. With administration that cultivates this good intent and an outside agency that supports and investigates the law, the ethically sound officer will have the ability to flourish and do the job with respect and honor. The result of this positive and ethical environment is public support and trust. There must be an outside agency that keeps an eye on the keeper. 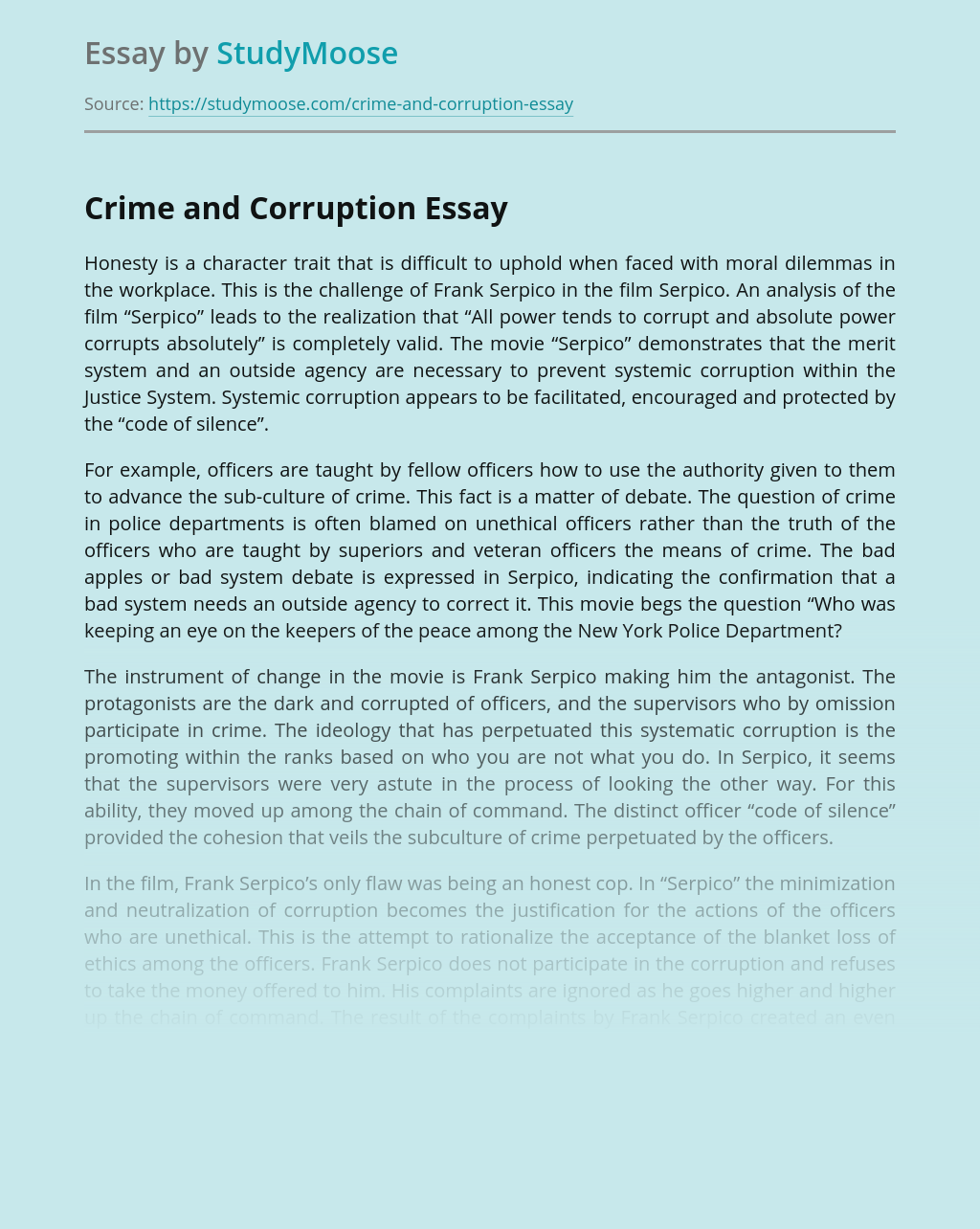 Turn in your highest-quality paper
Get a qualified writer to help you with
“ Crime and Corruption ”
Get high-quality paper
Helping students since 2015
Stay Safe, Stay Original