Each stage provides different level of control and contains different amount of risk.

Don't use plagiarized sources. Get your custom essay on
“ International investment in modern world ”
Get custom paper
NEW! smart matching with writer

According to the U-model, Internationalization starts with a simple direct exporting activity. The company exports finished goods to foreign market without the assistance of agents or distributors. This step contains the smallest risk and the smallest sales capacity also. After a certain number of profitable export activities, the company will continue with indirect exporting, which is exporting using agents or distributors.

This step enhances the amount of exports possible (Johanson and Wiedesheim-Paul, 1975). The next step is developing sales subsidiaries in foreign markets.

This step consists of greater risk and greater opportunity of profit. Managers do not generally agree to enter this stage without significant consideration. The fourth step is establishing production facility in the foreign market. This is the final step that required the largest amount of funds and allowed the largest potential for obtaining significant market share in the foreign market (Johanson and Wiedesheim-Paul, 1975).

However, prior to deciding at which country (countries) a company must invest, they are likely to conduct country analysis in order to perform appropriate investment.

Concerning the issue, this paper will elaborate about country analysis on two in the Southeast Asia; they are Malaysia and Indonesia. The analysis is conduct on two factors: infrastructures and demographic factors. 2. Country Analysis Malaysia and Indonesia, to some degree, share many things in common like language, culture, social activity. However, history noted that the country performs different speed in chase for being developed countries.

The situation suggests that the two countries have different routes in take benefits of technological advancement, the provision of infrastructure to support businesses, and pay attention to diverse demographic components to strengthen the country’s competitive advantage in attracting foreign investors. 2. 1 Technology Infrastructure Technology is considered the road to a better future. It saves from using too many resources inefficiently and it helps increases the effectiveness of our efforts. However, in business, the implementation of technology must be seen with several precautions.

Without a proper adaptation and training period, implementation of new technology could bring trouble instead of operational and strategic enhancement. Robotics, factories automation, and information technology are examples of enabling technologies that help businesses to simplify operation while enhancing the number and quality of production outputs. Furthermore, as particular technologies mature, corporations significantly take benefits of them such as reduced workforces and increased outputs, to name a few.

Concerning the use of technology in business, both Malaysia and Indonesia realize the important to provide investors with recent technologies to help them keep pace with targeted results. Malaysia is position in South eastern Asia, near the Earth’s equator. The country directly has borders with Thailand, Indonesia, Singapore, Brunei, and south of Vietnam. Since the country located in tropical region, we witness that they are enriched with many tropical resources. In Borneo island, where directly border with Indonesia, the two countries benefits from vast timber, and oil and gas resources.

In addition to timber and petroleum, Malaysia also has other major natural resources such as copper, iron ore, natural gas, and bauxite, to name a few. However, the vast availability of tropical forest put Malaysia in annual hazards where forest fires in Borneo island occur almost every year that cause air pollution not only in Malaysia and Indonesia but also Singapore and other countries in South East Asia. The country also experiences other Natural hazards such as flooding, and landslides.

In addition, the provision of technology infrastructure is unquestionably important since the adoption of suitable technology will help business to generate more profits by increasing revenue and bring down the costs of services or production costs. In order to achieve these business goals, corporations consider the use of technology as the driving factors. In macro environment, a country also considers the technological development and innovation as factors that stimulate the country’s economy growth.

Technological development relates to a situation in which innovation enhances production output as the result of appropriate combination of capital and resources. Interestingly, as technology improves continuously, the benefits also increase accordingly. The most common benefits of using suitable technology in particular markets and industries relate to the fact that technology enables corporations to perform their business operation faster or cheaper. It means the main benefit of technology in business, in particular, is rooted primarily in the efficiency perspective.

In order to eliminate the threats that each country has, we suggests that the advancement of technology should be empowered. 2. 2 Demographic Today however, Indonesia is perceived as a structurally stronger economy. The country is no longer enjoying massive growth rates based on ‘staged’ economy and Indonesian people are more independent from the government in a sense that they have a stronger watch toward democracy practices and economic decisions in their country.

The government has also been trying to relieve the public sector from the burden of maintaining cheap prices for the people in expense of economic fragility. Government price controls and government incentives on fuel have been lessened gradually. The process of course, took a bit of a struggle, but the economy has been a lot more stable since 1997 and has been displaying normal growth for some time. In 2005, the country has a total GDP of $ 869. 7 billion, with a real GDP growth rate of 5. 6%. GDP per capita was $ 3,600.

13% of the GDP still comes from the agriculture sector, 45% of it comes from the industry sector, while 40% was from service sector. 46% of the labor force within the country still works in the agriculture sector, 11% in the industry sector and 41 % works in the services sector. 16. 7% of the population still lives under the poverty line. Inflation rate was 10. 5%. The country exports oil and gas, electrical appliances, plywood, textiles and rubber; and imports machinery and equipments, chemicals, and fuels (CIA, 2006).

The country has a considerably potential infrastructure to support investments. In terms of communication, telephone lines are available everywhere with local as well as international connections. The country has abundant radio and television broadcast stations, 43 FM and 678 AM, 54 local stations and 11 national TV networks. Internet connections are available in cities and nearby urban areas. In terms of transportation, Indonesia has well maintained roadways, waterways, railways, 662 airports, 23 heliports, etc (CIA, 2006). 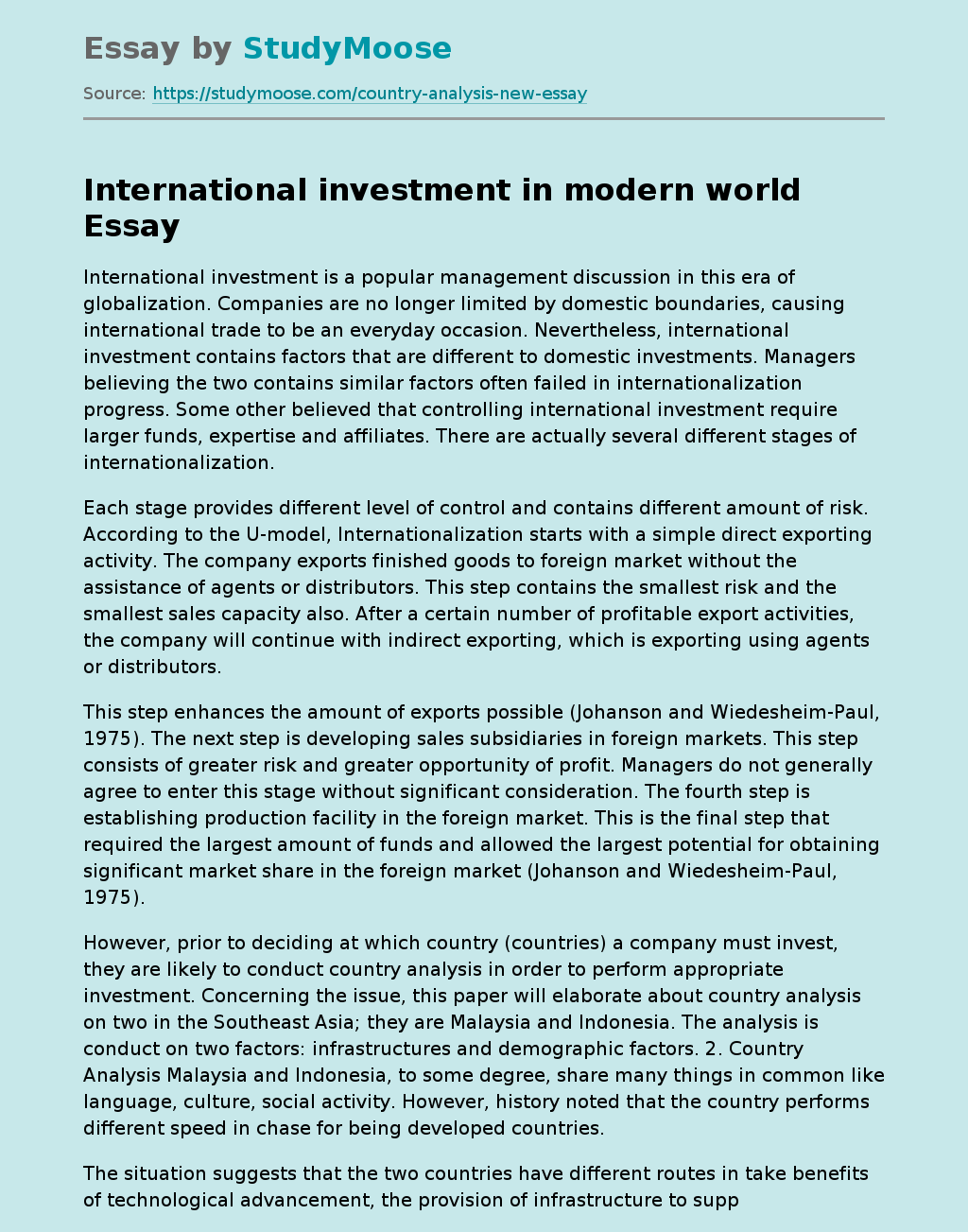