Abstract
In this paper, I will discuss the history of counseling; specifically how school counseling and mental health counseling came to be. I will also examine the key philosophies of the counseling profession including, wellness, resilience, and prevention. Finally, I will analyze the case of Ashley, a young girl experiencing depression due to life changes and discuss how a school counselor and a mental health counselor can assist her through these barriers.

According to S. T. Gladding (2004), the profession of counseling is fairly new.

Turn in your highest-quality paper
Get a qualified writer to help you with
“ Counseling Specializations and Multidisciplinary Teams ”
Get high-quality paper
NEW! AI matching with writers

Counseling began in the late 1890’s and early 1900’s. In the late 1890’s counseling was simply known as giving advice or information. In the United States, counseling began due to the concern and well being of those affected by the Industrial Revolution (S. T. Gladding, 2004, p. 8). Ginter (2002) stated, “Counseling emerged during a socially turbulent period that straddled the ending of one century and the beginning of another, a period marked by great change that caused a major shift in the way individuals viewed themselves and others” (p.

220). Prior to the professional title, “counselor,” people in the counseling profession recognized themselves as teachers and advocates. Advocates worked on teaching children and adults about themselves and built lessons on moral values and evaluated intra and interpersonal relationships.

1). People say, Aristotle may have been the first to write about wellness and during the Middle Ages, Descartes proposed a dichotomy of both mind and body and in the late 20th century a new model in medicine believed mind, body, and spirit were all important factors of both health and wellness (Meyers & Sweeney, 2008, p. 1). Resilience, another key philosophy in counseling came to light when Norman Garmezy (e.g., 1974), Emmy Werner and Ruth Smith (e.g., 1989), and Michael Rutter (e.g., 1999) all conducted extensive research. As stated by the Australian Government of Family studies, “…the concept of resilience has gone from being limited and specific in nature to being a more broad and widely encompassing construct.

Research has moved from focusing on the individual to seeing the child within his or her wider family and community context and considering a much broader range of risk and protective factors” (Hunter, 2012). A growing trend in the field of counseling is the emphasis on prevention instead of remediation. In the past it was common practice to meet with clients after or during a crisis. More recently, school counselors are beginning to intervene prior to major events and are working towards becoming more proactive in developing and carrying out individual and school wide prevention plans. Schools and families are needing help in preventing students from being involved with the many difficulties that come with being in high school, such as participating in gangs, dropping out of school, teen pregnancy, and drug and alcohol abuse (Krumboltz & Koplin, 2002).

The school counseling profession emerged at the turn of the twentieth century. John Krumboltz and Thierry Koplin (2002) tell us that the National Defense Education Act (NDEA) began in 1958 and provided aid to education of all levels to both public and private schools. The NDEA was created mainly to stimulate the advancement of education in science, math and foreign language. NDEA also provided funding to other areas such as technical skills, geography, school libraries and counseling. The idea of supporting counseling in schools came from the Soviet Union’s initiation of Sputnik and the fear instilled in American’s that other countries were achieving higher academic standings in the areas of math and science. NDEA felt if they provided more funding for school counseling, more students would be guided towards sciences. In the 1950’s, the American School Counselor Association was created, helping the school counseling profession grow.

Another area of counseling that has many connections to the school counseling profession is a mental health counselor. In the Historical and Professional Foundations of Counseling text, Gladding (2004) tells us about a man by the name of Clifford Beers, a former Yale student hospitalized several times throughout his life for depression. In Beer’s book, A Mind That Found Itself, published in 1908, Beer’s talks about the disgraceful conditions of mental health facilities. Beer’s used his book as a way to connect with influential people such as the Fords and Rockefellers. Beer’s work was a motivation to the mental health movement during his time. In 1976, the American Mental Health Counseling Association was founded and became one of the largest divisions of the APGA (American Personnel and Guidance Association) now known as the American Association for Counseling and Development (Gladding, 2004, p. 18).

After analyzing the case of Ashley, a 12 year old girl who has admitted to a teacher that she feels depressed, due to her mothers second marriage, the two children who came with the new marriage, and lack of ability to focus on classwork, she would benefit from speaking with both a school counselor and a mental health counselor. The school counselor can assist Ashley with the academic piece, as she has been unable to concentrate during her classes. The school counselor can work with Ashley to discuss the issues at home but can also work with her to devise a plan to complete classwork and check in several times throughout the week to ensure she is re-focused.

If a school counselor were leading a team of family members, school teachers, a mental health counselor and the student herself, it would be vital to keep open and accurate communication between all parties. The school counselor would ensure all parties involved with Ashley’s mental health, academics and well-being were informed of any changes in behavior and updated weekly. The school counselor may even set up an initial meeting either by teleconference or in person with all people involved to devise a plan to help Ashley. A check in system with the counselor might be suggested, along with weekly therapy with a mental health counselor, potentially with Ashley’s family, and school reports home updating everyone on Ashley’s academic success.

Overall, a school counselor and mental health counselor are similar in roles, but differ in responsibilities. Both professional counselors are concerned with clients’ well being but both are accountable for different tasks having to do with their clients.

Sweeney, T. J. Wellness Counseling: The Evidence Base for Practice. Journal of Counseling & Development, 482-493. Retrieved May 12, 2014, from the ProQuest database.

Hunter, C. (2012). Is resilience still a useful concept when working with children and young people?. Where did the concept come from? A brief history of resilience. Retrieved May 17, 2014, from http://www.aifs.gov.au/cfca/pubs/papers/a141718/04.html 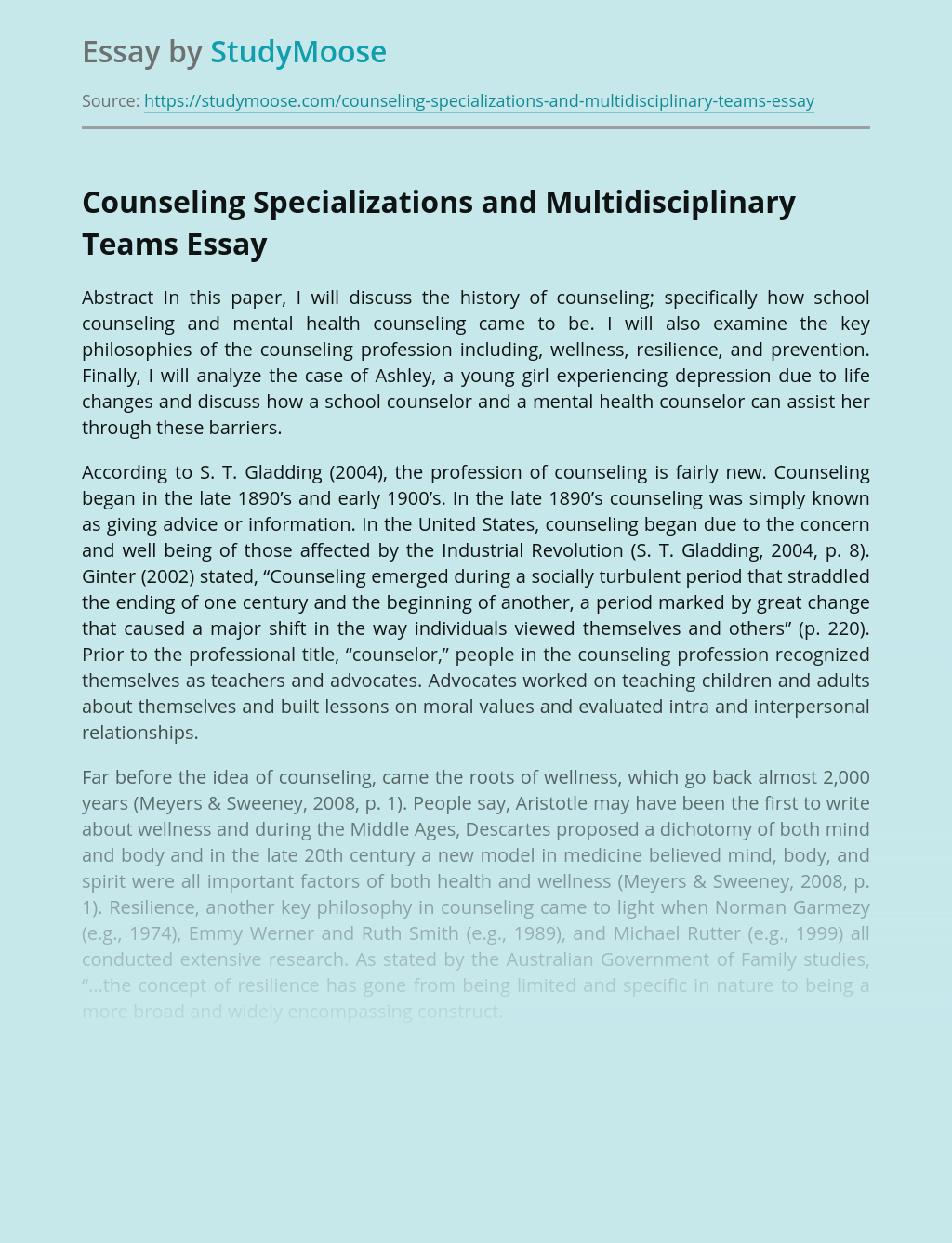 Turn in your highest-quality paper
Get a qualified writer to help you with
“ Counseling Specializations and Multidisciplinary Teams ”
Get high-quality paper
Helping students since 2015
Stay Safe, Stay Original