Everything is connected in Hamlet, including the welfare of the royal family and the health of the state as a whole. The play’s early scenes explore the sense of anxiety and dread that surrounds the transfer of power from one ruler to the next. Throughout the play, characters draw explicit connections between the moral legitimacy of a ruler and the health of the nation. Denmark is frequently described as a physical body made ill by the moral corruption of Claudius and Gertrude, and many observers interpret the presence of the ghost as a supernatural omen indicating that “something is rotten in the state of Denmark” .

Don't use plagiarized sources. Get your custom essay on
“ Corruption within Hamlet ”
Get custom paper
NEW! smart matching with writer

The dead King Hamlet is portrayed as a strong, forthright ruler under whose guard the state was in good health, while Claudius, a wicked politician, has corrupted and compromised Denmark to satisfy his own appetites.

Hamlet feels Disillusionment. Depression. Despair through the course of the play as he attempts to come to terms with his father’s death and his mother’s incestuous marriage to his uncle.

While he is attempting to pick up the pieces of his life he consciously embarks on the truth hidden in Ellsinore brought to light by his late father’s appearance at the gates. Deception versus truth; illusion versus reality. In the play, Prince Hamlet constantly has to differentiate amongst them. The exception to the rule in this case lies in Act 2, Scene 2, where an “honest” conversation takes place between Hamlet and Rosencrantz and Guildenstern. By the use of prose and figurative language, Shakespeare utilizes the passage to illustrate Hamlet’s view of the cosmos and mankind.

Throughout the play, the themes of illusion and deceit have been carefully developed. The entire royal Danish court is ensnared in a web of espionage, betrayal, and lies. Not a single man speaks his mind, nor addresses his purpose clearly.

Addressing Rosencrantz and Guildenstern, Hamlet pleads with them to deliver up honest speech about the intent of their arrival and being the bumbling fools they are, Rosencrantz and Guildenstern disclose their intentions and purposes to Hamlet, revealing the King and Queen’s instructions. So for once, truth prevails in this passage. The recurring motif of corruption also appears in the passage. Due to the wicked internal proceedings in the state of Denmark (e.g. murder, incest), Shakespeare implies that the whole state is “soiled”, which in turn has a direct negative consequence in the grand scheme of things. Imagery of rank plants is used to enforced and convey this view by using replacing the image of the traditional “aesthetically correct” beautiful flowers in a garden.

“‘Tis an unweeded garden that grows

to seed. Things rank and gross in nature

Those lines represent Hamlets views on the corruption that is taking place at Ellsinore on how the world to him has become empty and lifeless, dirty and diseased and his place in the world to be entrapped and isolated. He describes the land, in which he lives as,

“A goodly one, in which there are many confines,

wards, and dungeons, Denmark being one o’ th’ worst.”

Hamlets search for truth and truth inside people is highly unsuccessful as only one truthful man exists apart from himself and that is Horatio. Claudius is lustful and deceitful, Polonius is a mindless fool and Rosencrantz and Guildenstern are mindless idiots. This loss of enthusiasm and faith in man also stems from the fact that he knows there is more wickedness brewing under the superficial surface of calm that Claudius is trying to promote. As a culmination of all these factors, Hamlet loses all faith in man and using biblic ideas Hamlet redefines the position of man as simply “that which came from dust”. From this stance, it is inferred that solely God is Truth. Man, coming from the lowly earth, cannot be depended upon to deliver true thoughts, as his source of origin itself is impure. Through this, Hamlets concludes that Claudius’ actions and others actions can be accounted for but not forgiven. Claudius is corruption personified within the play, Hamlet’s major antagonist is a shrewd, lustful, conniving king who contrasts sharply with the other male characters in the play.

Whereas most of the other important men in Hamlet are preoccupied with ideas of justice, revenge, and moral balance, Claudius is bent upon maintaining his own power. The old King Hamlet was apparently a stern warrior, but Claudius is a corrupt politician whose main weapon is his ability to manipulate others through his skillful use of language. Claudius’s speech is compared to poison being poured in the ear–the method he used to murder Hamlet’s father. Claudius’s love for Gertrude may be sincere, but it also seems likely that he married her as a strategic move, to help him win the throne away from Hamlet after the death of the king. As the play progresses, Claudius’s mounting fear of Hamlet’s insanity leads him to ever greater self-preoccupation; when Gertrude tells him that Hamlet has killed Polonius, Claudius does not remark that Gertrude might have been in danger, but only that he would have been in danger had he been in the room.

He tells Laertes the same thing as he attempts to soothe the young man’s anger after his father’s death. Claudius is ultimately too crafty for his own good. Rather than allowing Laertes only two methods of killing Hamlet, the sharpened sword and the poison on the blade, Claudius insists on a third, the poisoned goblet. When Gertrude inadvertently drinks the poison and dies, Hamlet is at last able to bring himself to kill Claudius, and the king is felled by his own cowardliness and corruptive nature. 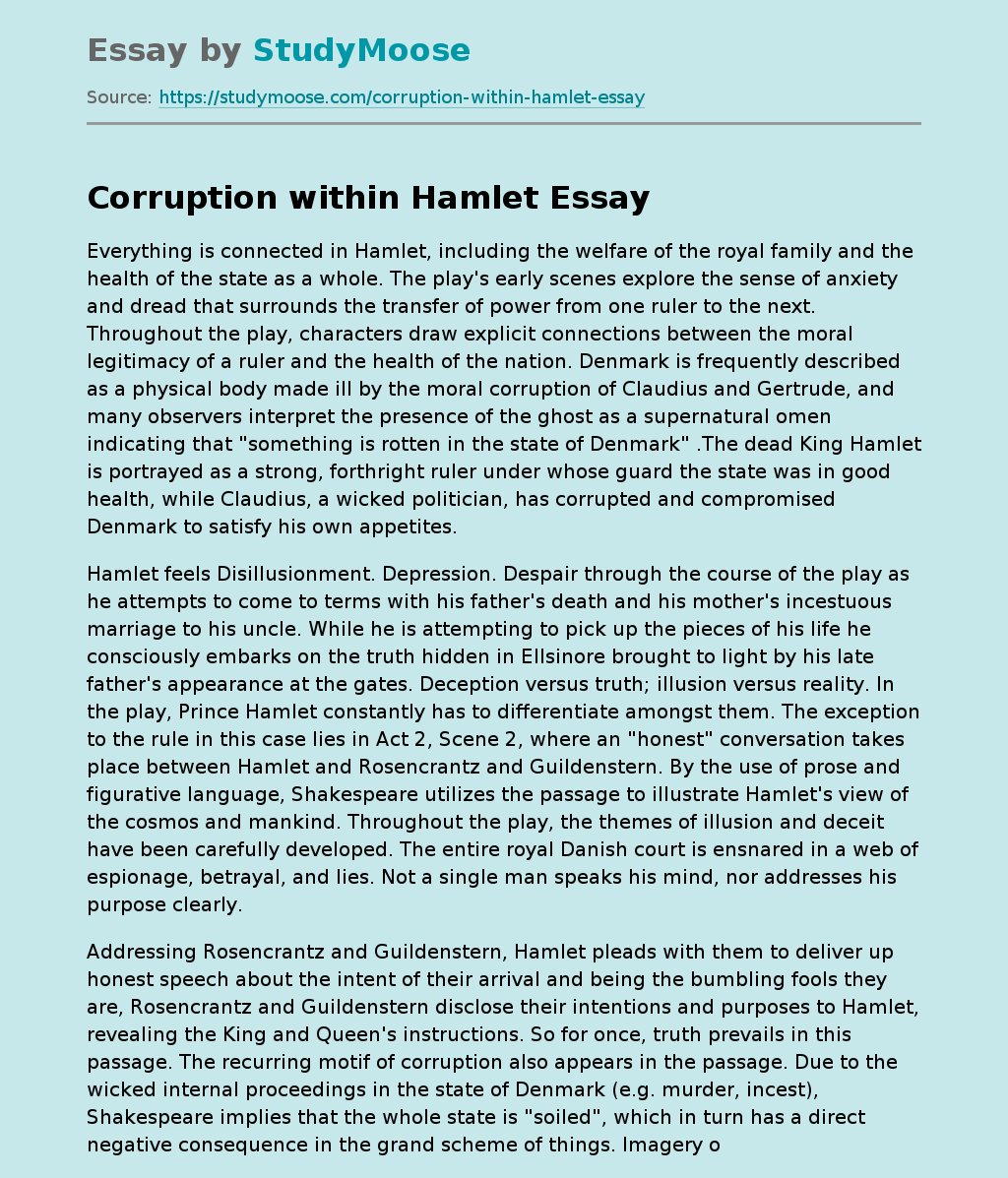