Realism is the promotion of representation of existing life, with emphasis on observable facts. Writers who considered themselves Realists, like Gustave Flaubert, were devoted to recording life as it was. Realism replaced Romanticism, and Flaubert uses his novel, Madame Bovary, to critique Romantic art and culture. He portrays Emma Bovary as a victim of the disillusionment and dissatisfaction of Romanticism, and continuously dismantles Romantic cliches through her character. Through the use of Realist writing and the characterization of Emma Bovary, Flaubert proves that maintaining Romantic ideals that can not be satisfied leads to a depressing and empty life of loneliness.

Don't use plagiarized sources. Get your custom essay on
“ Consequences of Romantic Idealism ”
Get custom paper
NEW! smart matching with writer

Flaubert uses Realist writing techniques to demonstrate Emma Bovary’s discontent with European provincial life. For example, Flaubert uses precise detail to describe the Bovary home in Yonville, and Emma’s disappointment with the life she is now trapped in. “But it was above all at mealtimes that she could bear it no longer, in that little room on the ground floor, with the smoking stove, the creaking door, the oozing walls, the damp floor-tiles; all the bitterness of life seemed to be served to her on her plate, and, with the steam from the boiled beef, there rose from the depths of her soul other exhalations as it were of disgust” (Flaubert, Part 1, Chapter 4).

This quote illustrates Flaubert’s appeal to Realism literature because it zooms in on several tiny details, all of which are quite unpleasant. On the other hand, the quote maintains a subjective tone that exemplifies Emma’s disgust and frustration.

The association between the physical aspect of the Bovary home and Emma’s thoughts are emphasized by the connections of her soul’s exhalations to the steam from the beef. Flaubert often links emotions to objects, and by doing so, he denies Emma her one desire, which is to escape from the physical world, and to live the better and more luxurious life that she yearns for. She wishes that she can leave this world and live in the realm of her romantic novels.

As she moves into this new home with a new life, she feels trapped among objects that disgust her. Flaubert uses such intricate details to describe the numerous imperfections Bovary home, so that his readers can feel like they too are in Emma’s new environment, allowing them to understand Emma’s frustration and disappointment. Another example of this occurs when Emma returned home from seeking help at the church. She was in distress, and the priest at church seemed to be oblivious to her internal suffering. “The whitish light of the window-panes was softly wavering. The pieces of furniture seemed more frozen in their places…the fire was out, the clock went on ticking, and Emma vaguely wondered at this calm of all things while within herself there was such a tumult” (Flaubert, Part 2, Chapter 6).

When Emma is back at home, she feels isolated, alone, and is frustrated with the fact that the world around her does not match her inner world, a world that she is desperate to be a part of. Flaubert again uses specific details of the Bovary home and its furniture to illustrate the physical world. These details allow the reader to vividly see the contrast between the lifeless and calm physical objects, and Emma’s turbulent emotions. It is as though the furniture, much like the priest, is also ignoring her distress, which increases her feelings of loneliness and isolation. She feels like there is no escape from this disappointing life, and it is killing her inside. Emma has no one and nothing besides her Romantic ideals to cling too, and it depresses her. Flaubert’s Realist style literature, with an emphasis on vivid detail and recording observable facts, allows the reader to understand how Emma’s devotion to unsatisfiable Romantic ideals are leading her down a dark and lonely path.

Realist artist Gustave Flaubert continues to use precise details of European provincial life to articulate Emma’s internal struggle versus the exterior world, and how it influences her thoughts about the rest of her life. An example of this occurs when Emma is about to be a mother. “She hoped for a son; he would be strong and dark; she would call him George; and this idea of having a male child was like an expected revenge for all her impotence in the past. A man, at least, is free. But a woman is always hampered. Being inert as well as pliable, she has against her the weakness of the flesh and the inequity of the law. Like the veil held to her hat by a ribbon, her will flutters in every breeze; she is always drawn by some desire, restrained by some rule of conduct” (Flaubert, Part 2, Chapter 3).

This quote is interesting because it consists of Emma’s thoughts as well as the unknown narrator’s voice. The lines “A man, at least, is free” and “a woman is always hampered,” are some of Emma’s thoughts, which are imbued with a romantic nature. The remainder of the quote, however, is the narrator’s voice, and foresees modern feminist thinking. The unnamed narrator claims that women are powerless not only over their financial situations, but also their emotions. This creates a double-edged sword, because Emma’s involuntary emotions are in conflict with her inescapable external circumstances. Her only choice is to behave within the confines of her current living situation, as she is unable to escape her mundane and unremarkable life. Emma’s hopes for a son represent a reimagination of her own identity, because of the immense control that men have in the home as well as in society.

Emma hopes to live vicariously through her son, and will enact her revenge through him, due to his access to opportunities that have been denied her. Flaubert’s use of vivid descriptions of women as, “veil held to her hat by a ribbon, her will flutters in every breeze,” paints the picture that women are seen as weak, and could easily be blown away by any obstacles of life if she were without a male to assist her. This description proves that Emma is aware that she is unable to escape this horrible life on her own, and she is praying that she will have a son that will not have to be subject to the captivity that she feels in this life. She ends up having a daughter, named Berthe, which turns out to be just another disappointment, and she continues to feel helpless and distraught. It is thanks to Flaubert’s Realist writing that the reader can understand the complex gender dynamic during this time, and can further understand why Emma is so upset that she gave birth to a daughter. He is further displaying the destructive nature of unsatisfiable Romantic thought, which leaves Emma feeling hopeless and isolated from the rest of the world.

A second example illustrates Emma’s longing for a better life, and how she wishes she could escape to Paris or to the realm of her romantic novels. “She had bought herself a blotter, a writing case, a pen and some envelopes, although she had no one to write to; she would dust off her whatnot, look at herself in the mirror, pick up a book, then begin to daydream between the lines and let it fall to her lap. She longed to travel, or to go back and live in the convent. She wanted both to die and to live in Paris” (Flaubert, Part 1, Chapter 9).

This quote demonstrates Emma’s boredom with married life, to the point where she can no longer focus enough to commit to any hobbies. Her longing to live in Paris, which she thinks is the only place for her, is so extreme that she wishes to either go to back to the convent, where she can immerse herself in romantic novels, or to die, because she can no longer tolerate this unsatisfactory and mundane life. Flaubert’s use of authentic detail aids the reader in really seeing Emma’s daily activities, helping Flaubert show that Emma is merely coasting through this life, without any passions, or even the will to live. This is just another example that proves that clinging to Romantic ideals that can not be satisfied leads to a dull and depressing life.

Realism is the representation of existing life, with an emphasis on observable facts. Flaubert achieves this by using vivid details to help the readers to visualize the physical world that surrounds Emma, in contrast to her internal emotions, and her yearning for a better life. Flaubert’s attention to accuracy victimizes Emma because she is unable to see herself and the world as they truly are. Her monotonous Yonville life makes her desire one more exciting and remarkable. Emma is characterized as the Romantic spirit in thought, expression, and action.

She is constantly viewing herself and her surroundings from a Romantic perspective, and finds the life she is living to be disappointing. She truly believes that it is her purpose in life to live luxuriously, dressing in beautiful gowns and dining in expensive restaurants, completely consumed in a passionate love with a rich and handsome man who puts her above all else. The fact that she can never truly achieve these goals drives her into a depression, and often leaves her frustrated, feeling isolated and misunderstood. Flaubert creates her character in Madame Bovary to criticize Romantic ideals, and uses her death and demise as a lover, wife, and mother to prove how Romantic ideas that are unable to be satisfied will lead to a life of depression and disappointment. 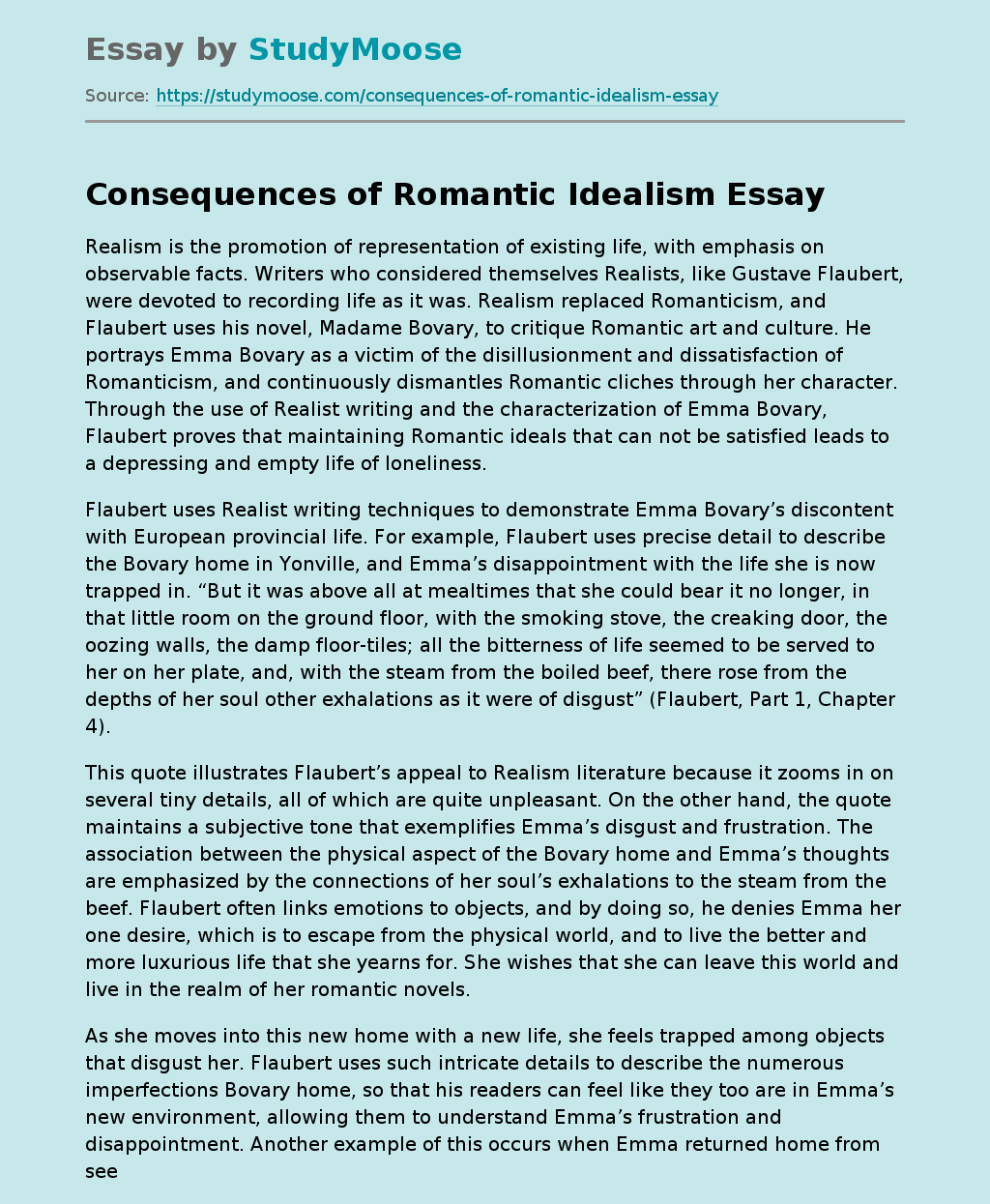