She is bland in comparison to Cleopatra, who we recognise as our heroine, and we do not feel bonded to her. However she is perhaps an obvious example of how the rules of Jacobean society was snubbed by Shakespeare. Octavia is the ideal wife according to the rules. She is beautiful and virtuous and everything Antony needs in a wife. But he cannot and will not love her. He will ‘to his Egyptian dish again’- he cannot get enough of Cleopatra.

Don't use plagiarized sources. Get your custom essay on
“ Comparison to Cleopatra ”
Get custom paper
NEW! smart matching with writer

Enobarbus is a useful tool in the play, as he provides us with an inside running commentary. He is known for speaking the truth and does so when describing Cleopatra.

“Age cannot wither her, nor custom stale Her infinite variety” Octavia may be virtuous and beautiful and charming but Cleopatra is exciting and enchanting and enthralling. She is the only woman ever to grip Antony’s heart and not let go, she is his match and because of this there is never going to be another woman for him, nor, consequently, will she ever be able to do without him.

In Elizabeth Wurtzel’s ‘Bitch’ she says of Cleopatra “her charisma came from a deeper well within, then her weapon is her allure”.

Metaphorical net of charm and glamour

Cleopatra, using her metaphorical net of charm and glamour and allure, caught Antony and stopped his escape. In the Jacobean era, Antony and Cleopatra must have been shocking. The thought that a woman could have that kind of control over a Triumvir, a man of explosive power and privilege, was outrageous.

At the time the play was written, Queen Elizabeth I was on the throne. In normal circumstances, this would have been seen as an outrageous act- giving a woman such power. However Elizabeth behaved much like her male counterparts, fighting in war and leading a life of celibacy.

Cleopatra did not behave like a queen. She used her power to play games, she flaunted her wealth and laughed at those who scorned her. She was not proper and not ‘right’. But I feel it was also probably very satisfying to see. For once a woman was not only an equal but a superior and she manipulated a man to get her way. ‘Antony and Cleopatra’ was successful because it was entertaining, because it was new and foreign. People didn’t have to accept it because it was art, it was okay to enjoy this without worrying about how factual it was. Also this was a different culture. Cleopatra could be passed off as a foreigner without self control. She was not a threat because she was an Egyptian and did not endanger the English way of life.

Certainly men thought in a certain way that would have found Cleopatra’s power insulting. Swetnam was a man with firm beliefs as to how women should be treated by society. He points out that Moses said that woman was to be man’s helper, made of his rib. He then goes on to suggest that as ribs are naturally crooked, women are ‘crooked by nature’. This is probably for the most part, exaggerated, but it is still an indication of how men felt about women. They were not images of robustness or might- they were second class citizens- the helpers of men.

In today’s society things are very different. ‘Girl power’ is raging- women are getting better jobs, earning more money and making men roll over for them. When actress Galleon Anderson discovered her co star David Duchovny was earning more than she was for an equal role, she demanded identical pay and got it. Nowadays women are benefiting from the sexual revolution and ideas about the sexes are far removed from those in Shakespeare’s day. But this does not take anything away from ‘Antony and Cleopatra’.

It still has the classic forbidden love story, the tears and the death and the one thing that made the play so shocking all those years ago is still very much a factor. In a time when women are equal, Cleopatra is still more. She is better, she is the best, and women are still striving to do that, to be better than their men. Ally McBeal is a classic example of the ‘two sides of the coin’. She is a highly successful career woman, earning a great deal of money, living in her own apartment. Yet she is constantly in search of a man to make her feel whole. She wants a husband and baby and a family to settle down with. In this way she is much like Cleopatra.

This Egyptian Queen has the world at her feet, everything she could ever desire, yet she is defeated by a single man. He reverts her to the classic Jacobean woman- needing a man to feel complete. Women have still not reached a period where they can just be the best, can take control and make men need them. However Cleopatra is not all strength and brilliance. Jacobean tragedy was always headed by a hero, so powerful and special, but with one major, and usually fatal, flaw. The hero is brought down by his greed or arrogance or pride. In Antony’s case it was his love for Cleopatra which brought him to his knees.

But, as we already know, Antony shared his spotlight equally with Cleopatra, so she too must have her flaw if she is to fit into the stereotypical ‘Jacobean tragedy’ genre. Her main weakness, coincidentally, is Antony but the audience only gets small glimpses of the flaw, making it so much more surprising when she too is conquered. It is consistently hinted that her love us true but we get to see it most clearly when Antony leaves Cleopatra for Rome. This is also true of Cleopatra’s other flaws.

When they are together, Cleopatra is feisty and vivacious. But when he leaves her, we can see that her insecurity, her aggression, her fear of being alone are highlighted by his absence. “That I might sleep out this great gap of time: My Antony is away. ” She is willing to sleep away all the time he is away because she can’t bear the thought of him being there. She wonders where he is, what he’s doing, if he’s riding or sitting. She so lovelorn, she remarks she will send messages every day or ‘unpeople Egypt’. And in the end, of course, she kills herself because Antony is dead.

I think this adds a certain vulnerability to Cleopatra’s character- it makes her seems less harsh, less manipulative. “Go to the fellow, good Alexas bid him Report the features of Octavia: her years, Her inclination, let him not leave out, The colour of her hair. Bring me word quickly. ” We gain a little understanding as to why she is the way she is, why she resorts to such dirty tricks to woo Antony. She is extremely weak underneath her toughened exterior, which is why she can’t just have Antony love her- he has to be completely defeated by her. Thus she fits well into the ‘Jacobean hero’ role, tying in with her masculine role in the relationship.

Thus, ‘Antony and Cleopatra’ is still as relevant today as it was then because until women have reached the ‘better’ stage, Cleopatra will always be a template. ‘Antony and Cleopatra’ is many things but it basely a love story and concentrates on the repercussions of love. Shakespeare uses the basic relationship between man and woman and creates a story so brilliant that it has lasted to this day, where it still has an affect on the audience. At the start of the play Antony proclaims to his love Cleopatra, “We stand up peerless’ and I believe he is right. 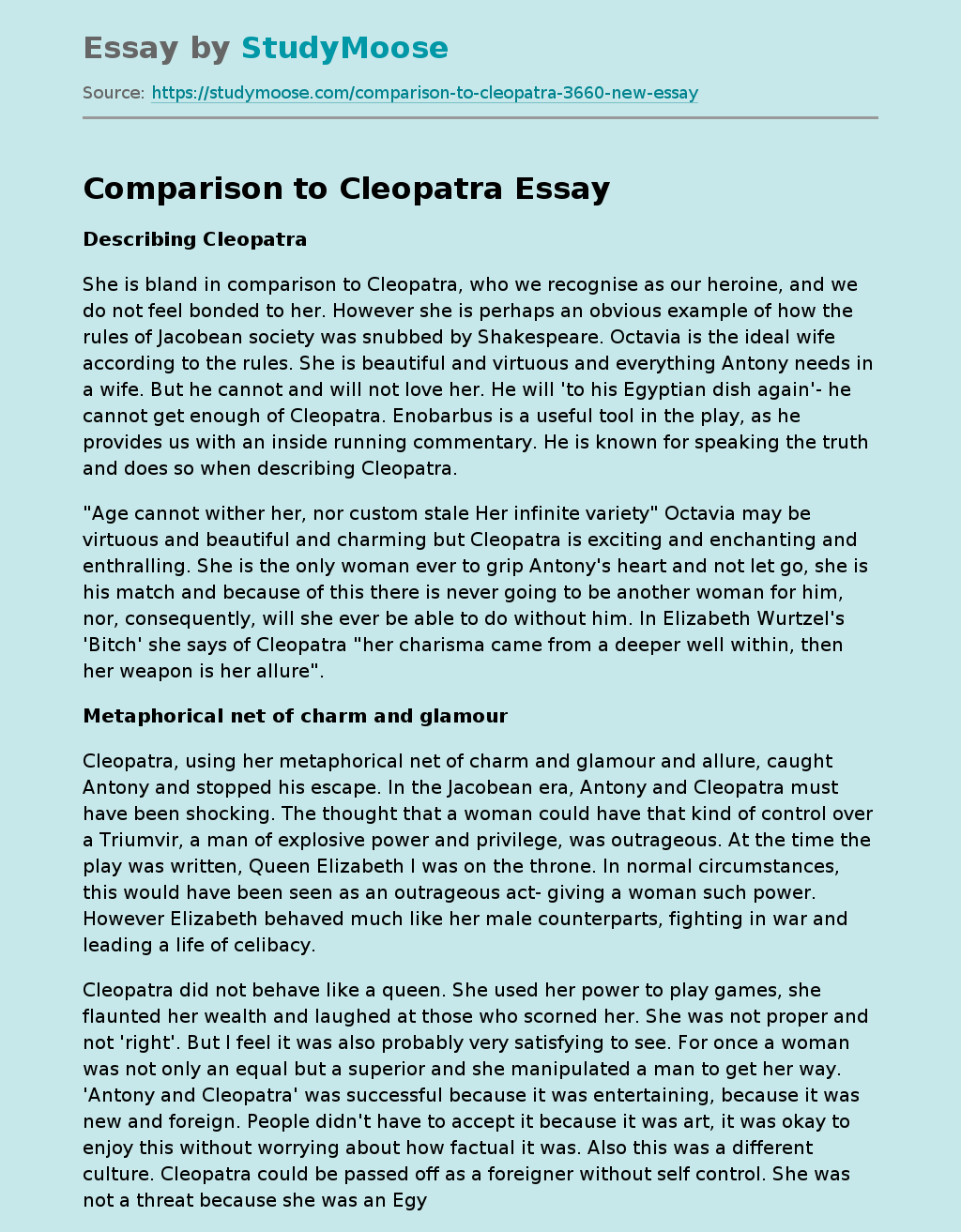