Comparison of the Young Goodman Brown and the DestructorsEnglish 102: Literature and CompositionSpring D 2019Ivan Morris #L2329660504/09/2019, 6:27 pmAPAComparison of the Young Goodman Brown and the DestructorsIvan B. MorrisLiberty UniversityAbstract”Young Goodman Brown” is a religious allegory that uncovers the weakness of Puritanism. Goodman Brown, a Salem resident, leaves his wife Faith one night to keep an appointment in the forest. Brown’s meeting with the Devil is rich with symbolism, including the Devil’s likeness to Brown’s grandfather, his serpent-head staff, and the veil Faith wears during the Black Mass.

Don't use plagiarized sources. Get your custom essay on
“ Comparison of the Young Goodman Brown and the DestructorsEnglish 102 Literature and ”
Get custom paper
NEW! smart matching with writer

In The Destructors author Graham Greene’s narrator is selectively omniscient. Although the reader is made aware of the internal doubts and anxieties of Blackie, the deposed leader, the inner workings of T’s troubled mind remain closed. The narrator is also decidedly neutral and uncensorious in the general treatment of this focal character. To proponents of the tradition represented by the objects T. destroys, this child seems the very essence of evil.

Greene, however, offers nothing to suggest anything other than a mysterious amorality that is cold, implacable, and generally inexplicable, although he piques curiosity with oblique references to T’s background and mental state.Comparison of the Young Goodman Brown and the DestructorsIn The Destructors Author Graham Greene portrays ordinary people with the ability of becoming both good and evil. They often find themselves in situations in which these opposing impulses conflict with each other, and they must often make decisions about the path they will take. In the disturbing short story The Destructors,” a group of teenage boys willingly chooses the path of selfishness, cruelty, and evil when they victimize a helpless old man.

Given Greene’s tendency to offer his characters the possibility of redemption, the reader may wonder if he has done so here.Amid the lingering London ruins of the bombing raids of World War II, a gang of adolescent boys known as the Wormsley Street Gang, pass their summer holidays carrying out various projects of collective mischief. They are the inhabitants of a neighborhood known as Wormsley Common, one of the poorest sections of the city. They meet and play in a communal parking lot, which adjoins a battered but stately eighteenth century house. The word destruction really comes in to play when T a member of the gang comes up with a plot to destroy the stately eighteenth century house. Thus, by doing this the barren landscape symbolizes the erosion of aesthetic values in a postwar world. In Young Goodman Brown, this is a religious allegory set in seventeenth century Puritan Salem, Massachusetts, Young Goodman Brown is recounted by an omniscient narrator who intentionally casts doubt over all the events he relates. As the story opens, Goodman Brown, a young, newly married Puritan, says goodbye to Faith, his wife of only three months, and is about to embark upon a mysterious overnight journey. Faith begs him not to go, but Brown says that he has a task that must be finished before sunrise. He walks down the main street of Salem Comparison of the Young Goodman Brown and the Destructorsand into the forest; as he proceeds deeper, he meets an old man who is the Devil in disguise Brown does not seem to be afraid rather he carries the devils walking stick and they talk with each other. We also see that as Brown continues to walk with the devil, he starts to run into other towns folk of which he starts to learn their true nature. As he finds himself full of doubts about good and evil and his Puritan beliefs, only the thought of his wife, Faith, sustains him. When Brown begins to pray, he hears Faith’s voice, and soon discovers that she is about to be initiated into the Devil’s party. He never finds out whether he dreamed his experience in the forest or if it really took place, but from that time on, Brown is a lonely, distrustful man who rejects his wife and his religion. When the time comes for him to die, many years later, the narrator explains that his dying hour was gloom. In conclusion; we see in both Young Goodman Brown and The Destructors, there is an air of conflict in both stories and it does not take the audience much time to pick it up. In Young Goodman Brown there is destruction of souls, and in The Destructors there is destruction of a building. In each we see that the best part of something is being erased only to make room for doom and gloom to take over.References”The Destructors – The Possibility of Redemption” Short Stories for Students Vol. 14. Gale Cengage eNotes.com9 Apr 2019 Last Name, F. M. (Year). Book Title. City Name: Publisher Name.”Young Goodman Brown – Introduction” Nineteenth-Century Literary Criticism Ed. Juliet Byington. Vol. 95. Gale Cengage 2001 eNotes.com 10 Apr 2019

Comparison of the Young Goodman Brown and the DestructorsEnglish 102 Literature and. (2019, Aug 20). Retrieved from https://studymoose.com/comparison-of-the-young-goodman-brown-and-the-destructorsenglish-102-literature-and-essay 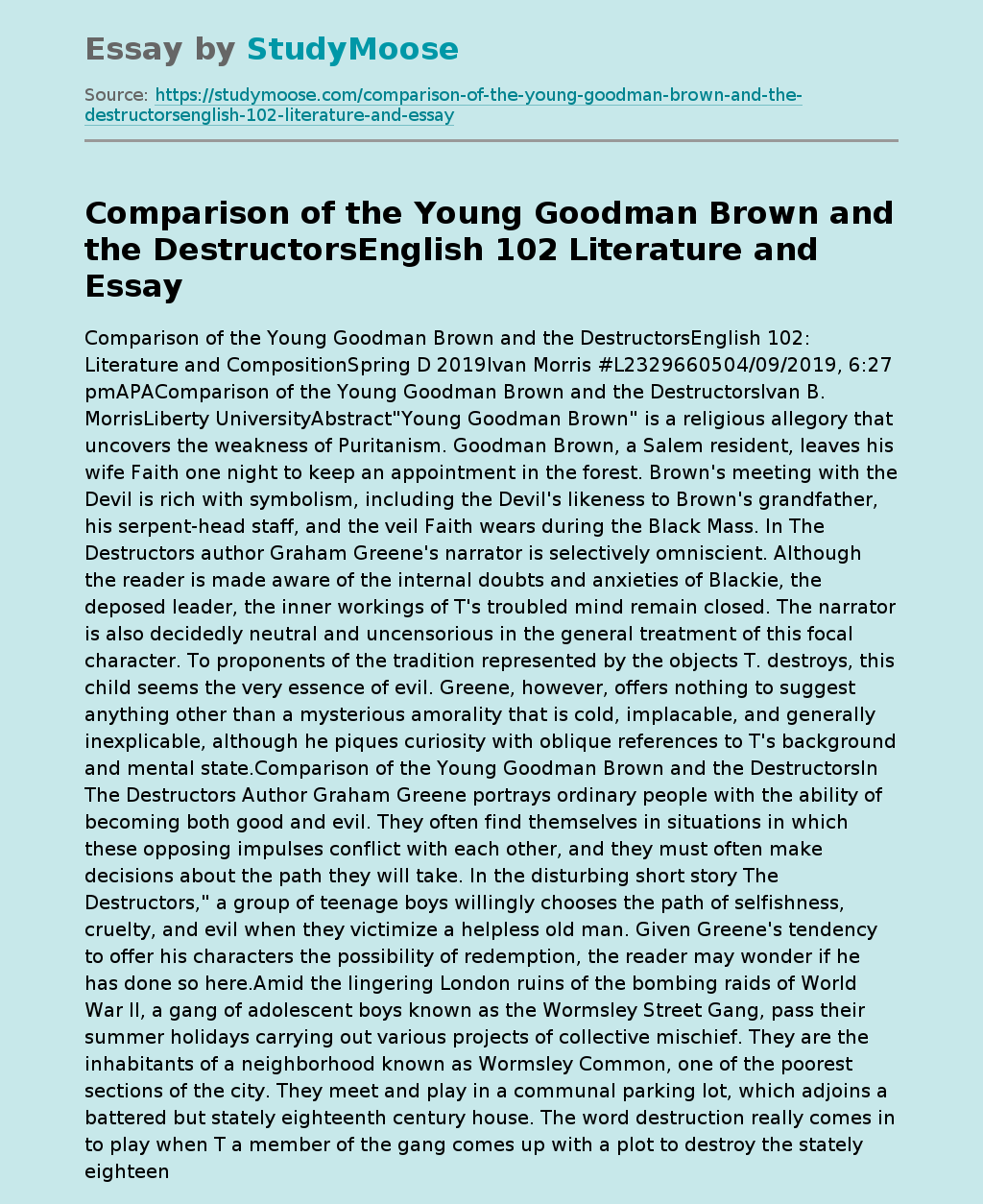