In act one scene 3 where Mac Beth and Banquo are returning from battle. Mac Beth is standing tall and proud as they have won. He is already the thane of Glamis and has started to be noticed by everyone as a very good warrior and a battle hero.

At the point where they meet the witches for first time Mac Beth is on a real high. His first words are “So foul and fair a day I have not seen”. This quote is very important as in act one scene one the last thing the witches say is “Fair is foul, and foul is fair” which shows before we even meet Mac Beth the witches already have some control over him.

Don't use plagiarized sources. Get your custom essay on
“ Comparing the behaviour and language of Macbeth and Banquo from act 1 scene 3 to act 3 scene 1 ”
Get custom paper
NEW! smart matching with writer

When Mac Beth is told these 2 things, which are to happen in his life, he is shocked but I think quietly pleased and very exited. He does not really want to show he thinks they will happen as this may make him seem big headed and arrogant.

When a little later it becomes know that he is now thane of cawdor he Is very shocked. At first I think he is so shocked he doesn’t quite realise what this means but about a minute or two later he now realises the first things has come true so could the other I know this by the quote ” Glamis, and thane of cawdor. The greatest is behind”. I think this quote has another great importance, as he is not actually speaking this these are his thoughts.

So already he is keeping his thoughts a secrete as he may think these may also make him seem big headed. So already he is starting to change. Read compare and contrast Macbeth and Banquo analysis

Some words I would use to describe Mac Beth in act one scene three are noble, honest, and heroic, and he would die for his king.

At the start of act three scene one Mac Beth is now the king. He has now murdered the king all his servants and is planning the death of banquo. I think he has changed a lot. Part of this I think is due to his wife. As it was her who persuaded him to kill the king in the first place. Even though banquo was his best friend now he sees him only as threat. I now think Mac Beth has gone very down hill from being kind and honest to being heartless and greedy.

Where Mac Beth is talking to the murderers trying to get them to kill Banquo for him he says “both of you know banquo was your enemy” not only is he betraying his best friend he is getting him self out of it. What did of noble king kills people just because they are a threat. That is how I think Mac Beth has changed as before he would never think of doing such a thing but now it is almost as if he has to.

I think Banquo is very different to Mac Beth as all the way though the story I think he was just looking out for Mac Beth trying to make sure he made the best decisions.

When he witches tell them about the predictions I think banquo is just as shocked as Mac Beth at first but I think as he thinks about it he is slightly jealous. He does have his own news though. He is told he will not be king but his children will. He is not sure weather he would rather be king for as most parents want the best and sometimes a lot more than they had.

When Mac Beth says, “Your children shall be kings” Banquo immediately replies with “you shall be king”. This to me is as if he doesn’t want to talk about that he would rather see some one else be fussed over. When the first of Mac Beth prediction comes true he is very shocked and says, ” What, can the devil speak true” this shows he is shocked but I also think it shows he doesn’t really want this to happen because he knows it will change everything between him and Mac Beth.

Now Banquo thinks well if his has come true mine could as well. I think he doesn’t want to believe it when he says, “The instruments of darkness tell us truths”. It’s like he doesn’t want to get his hopes up in case it isn’t true, especially as the person that said they would be was a witch not someone you can trust.

I think banquo does not change as much as Mac Beth but there is a still change in him. He is no very suspicious of Mac Beth and suspects it was him who killed the king. He has seen Mac Beth change and now knows that he would now go to any length to stay at the top and to get what he wants.

In the conversation between Mac Beth and Banquo at the very beginning of act three scene one I think there is a lot of sarcasm like when Mac Beth says, “Fail not our feast” and Banquo with replies, “My lord, I will not”. It is as if they are telling lies to each other. Mac Beth thinks Banquo doesn’t have a clue but Banquo has his suspicions that Mac Beth will have him killed he just doesn’t know when and where.

I don’t think Banquo does actually change that much at all if any thing he would now be much more weary of everyone and would not trust as many people as before. Mainly because the person he once trusted the most now wants him dead. Overall I think that Banquo could properly have made things different if he had been a bit more confident a spoke out more. All the way though I got the impression that he had a lot more going on in his head that he was letting on.

Comparing the behaviour and language of Macbeth and Banquo from act 1 scene 3 to act 3 scene 1. (2020, Jun 01). Retrieved from https://studymoose.com/comparing-behaviour-language-macbeth-banquo-act-1-scene-3-act-3-scene-1-new-essay 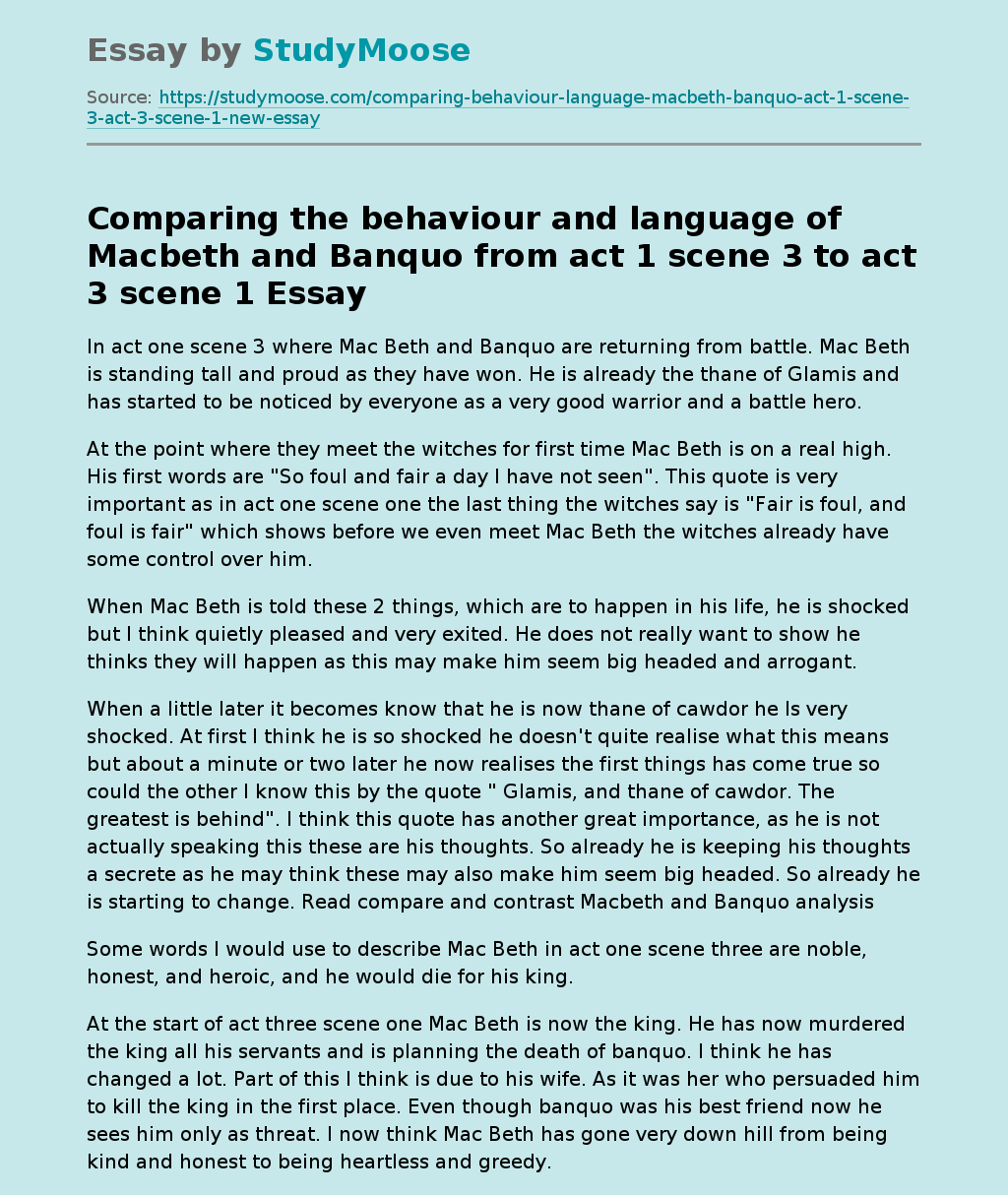