In comparing your TWO texts you will have become aware of how the contexts of the texts have shaped their form and meaning. Of more interest, perhaps, is a comparison of the values associated with each text. In comparing Aldous Huxley’s Brave New World and Ridley Scott’s 1992 Blade Runner: Director’s Cut, the responder becomes aware of the ways in which the contexts of these texts’ production have influenced and shaped their form and meaning.

Further study of these texts also reveals that both of these text share many similar values, and examine human understanding of and relationship with the natural world in the futuristic societies depicted.

Aldous Huxley’s Brave New World is set in the World State, a futuristic society where humanity is controlled completely for the sake of social stability. Brave New World was first published in 1932.

Huxley was satirically responding to influences such as the advent of mass production, the boom in science and technological discovery, the catastrophe of WW1, and the horror caused by weapons of mass destruction that came in to use during this conflict.

The 1930’s was also an era where the ideological struggle between fascism and socialism was surfacing. These influences have shaped Huxley’s text in many ways.

The production of humans in mass numbers through processes such as Bokanovsky’s Process and Podsnap’s Technique depicted in Brave New World is mass manufacture taken to the extremities, a response from Huxley to the dawn of this technology. The control that the world state has over its citizens has many parallels to fascist states, and could be seen as a criticism of these ideologies.

Ridley Scott’s Blade Runner Director’s Cut is set in Los Angeles, 2019. Humans are beginning to colonize other planets because of the pollution and overcrowding of Earth.

The Tyrell Corporation has created replicants, machines that are “more human than human”- they are almost undistinguishable from normal people, however they have superhuman strengths and intelligence. Replicants are outlawed on earth, and when they try and return from the off world, it is the job of Blade Runners to track them down. Adapted from the novel Do Androids Dream of Electric Sheep, the film was first screened in 1982, and the director’s cut was released ten years later. Scott was responding to the mega wealth and corporate greed created by capitalism in the 1980’s.

He was also responding to problems such as overpopulation and pollution, and the exploitation of the Earth’s environment. The development of scientific technologies such as genetic engineering and cloning were things Scott was aware of, and was responding to through his text. These contextual influences are apparent in many aspects of BR. The landscape depicted in BR, a dark, smoky, overcrowded cityscape with no presence of the natural environment illustrates Scott’s vision of what our cities may become in the future if the habits and practices common in the time of textual production continue.

The replicants could also caution of the potential misuse of the genetic engineering and cloning technologies that were being conceived in Scott’s time. Both texts convey many similar values. The relationship between humans and the natural world is questioned in each text. In BNW the mass production of humans, and their conditioning, means the end to natural processes such as pregnancy, as well as the suppression of natural human emotions. This is illustrated by the hypnopaedic teaching reiterated by Lenina; “When the individual feels, the community reels”.

Natural emotions and processes are abandoned for the sake of social stability. Huxley highlights the detachment of the citizens of the World State from what is natural by juxtaposing the savage reservation with the “civilized” city of London. In BR, Scott presents us with a world where the lines dividing the artificial and natural are blurred. Natural human instincts and emotions remain unaltered, however they are no longer exclusive to humanity. Each text questions the value of life, both human and replicant.

In BNW death is dehumanized (by conditioning methods from childhood) and lives have no value beyond performing their set role in society. Death is not mourned; bodies are simply burned to recover chemicals such as phosphorus. In the final scene of BR, Roy comments that all of his memories and experiences will “be lost like tears in rain”, illustrating the futility of his life. The lives of replicants have no value even though they emulate human characteristics; they are slaves to their society.

Both texts project a cautionary value. They warn the contemporary responder of the possible implications of uncontrolled technological development. They also caution against the detachment from, and destruction of, the natural world. They urge the contemporary responder to be wary of the use of technology, and the impact they are having on the environment, as one day the man-made may be controlling man in ways not dissimilar from those prophesized by Huxley and Scott.

From studying Ridley Scott’s Blade Runner Director’s Cut and Aldous Huxley’s Brave New World the responder is made aware of the way the contexts of production have shaped many values and ideas reflected in these texts. Despite having differing contextual influences, BR and BNW reflect many similar values. They both explore humanity’s relationship and understanding of the natural world and the value of life. Both texts have a cautionary value which is relevant for the contemporary responder, as well as the targeted audiences at the time of textual production. 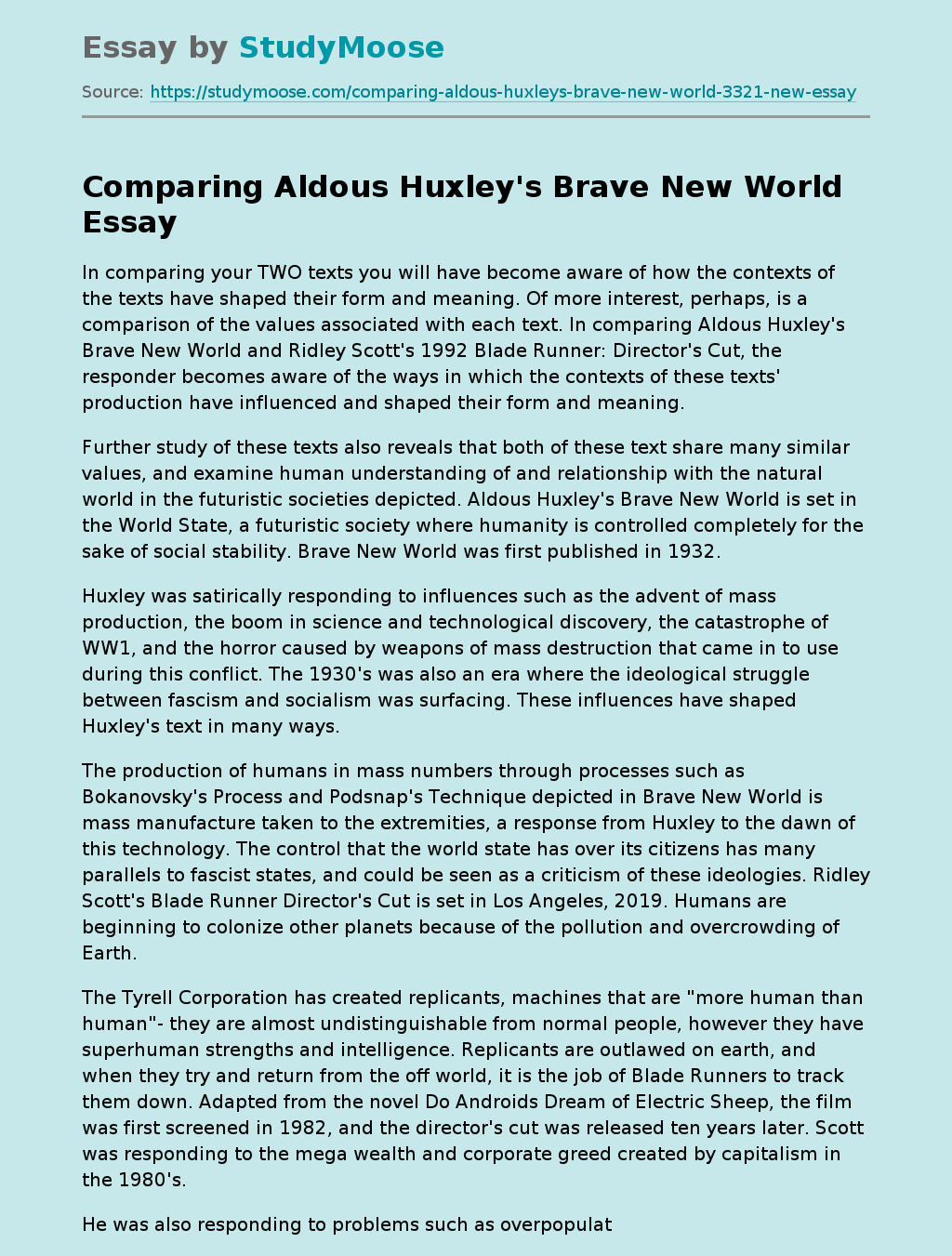