Compare and Contrast the Ways in Which Two Poets Create Sympathy for Their Characters – ‘on a Portrait of a Deaf Man’ and ‘the River God’.

The poems ‘On a Portrait of a Deaf Man’, written by John Betjeman and ‘The River God’, written by Stevie Smith appear as two very different poems; one in monologue form and the other in a regular form; but they are in fact two very similar poems. ‘On a Portrait of a Deaf Man’ presents a character mourning the death of a deaf man who was very close to him/her, and ‘The River God’ presents a lonely God who is abused by people and resorts to murdering women to keep himself company.

Don't use plagiarized sources. Get your custom essay on
“ Compare and Contrast the Ways in Which Two Poets Create Sympathy for Their Characters – ‘on a Portrait of a Deaf Man’ and ‘the River God’. ”
Get custom paper
NEW! smart matching with writer

Both characters are lonely and the portrayal of this loneliness causes you – the reader – to feel sympathetic towards them. The ‘River God’ is lonely because he is only used by others, no one stays to be with him, they leave – ‘and I like the people who bathe in me . . . or will she go away?’ suggesting that he enjoys their company but doesn’t want them to go as he get’s lonely.

In ‘On a Portrait of a Deaf Man’ the mourner feels lonely because he/she has lost someone very close to them – ‘the kind old face . . . he took me on long silent walks . . . when young’ implying they were close as they have known each other since a young age.

Both blame others for the situations that they have found themselves in. The ‘River God’ blames the women who ‘bathe in [him]’ for his loneliness, meaning that out of desperation he tries to keep the women with him but by doing so ends up killing them ‘she lies in my beautiful deep river bed with many a weed’.

I believe he understands though that he has killed them and that is why he keeps them in the ‘beautiful deep river bed’; this causes you to feel some sympathy for him as he accidentally kills them but then out of love keeps them in his ‘beautiful deep river bed’. The mourner blames God for the death of the ‘deaf man’: ‘You, God, who treat him thus and thus, /Say ‘Save his soul and pray.’/You ask me to believe You and / I only see decay’ describing how God should be, but then the reality of asking God for things which aren’t achieved. This causes you to feel sympathetic because you see someone who asked God to save him yet he still died – ‘see decay’.

The poems both begin with descriptions of characters. ‘The River God’ begins ‘the kind old face, the egg-shaped head’ and ‘On a Portrait of a Deaf Man’ begins ‘I may be smelly and I may be old’; the first description makes you feel sad that someone kind and good has died and the second makes you feel pitiful for the river, it’s not the river’s fault that it’s that way as it’s reflective of old age and the abuse it has had by mankind, all of which you would be distraught if you found yourself in so you can feel sympathetic towards them.

The poets use the death of a person to draw sympathy from you. In ‘The River God’ a woman dies, one that he was fond of and he was against her dying; in ‘On a Portrait of a Deaf Man’ a friendly deaf man dies, presumably suddenly; these draw your sympathy because it suggests that they are lonely, in a state of mourning and vulnerable – all of which are states in which you would not want to find yourself and when you see someone else in such a state, you will feel sympathetic and be able to relate to the emotions they are feeling.

The poets use the deaths of characters in their poems to create side-personas for the characters through the persona of the main-speaking character. ‘The River God’ uses the dead woman to give another perspective of what’s going on, ‘This beautiful lady, or will she go away?’ shows this perfectly. The questioning gives her perspective that she wants to leave but she is being held, leading you to feel sympathetic for her as this large ‘River’ is holding her captive and she cannot leave. However, it shows the misunderstanding of the ‘River God’ as she is drowned, ‘Oh who would guess what a beautiful white face lies there’, ‘white face’ implying she is dead, leading you to feel sympathetic again towards him as he is totally ignorant of everything going on around him. ‘On a Portrait of a Deaf Man’, the writer uses the deaf man to display what exactly he/she has lost through his death, ‘He knew the names of ev’ry bird’.

This shows how caring he was and this would presumably translate to how he acts to people – kind and caring – and lead to sympathy as you would never want to lose a person so good to die. The poem also describes what further potential to do good he had if he knew what was coming, ‘He would have liked to say good-bye/Shake hands with many friends.’ This causes a sympathetic response from the reader because again even though he was dying he would have wanted to show respect to his friends rather than just leaving. It also creates sympathy because the person who has lost this ‘kind’ man would be very upset about his/her death. We see this when he/she blames God for his death as he didn’t save him/her, ‘’Save his soul and pray.’/ You ask me to believe You and/ I only see decay.’ – this shows a stage of mourning in which you blame others for the death you have experienced.

Compare and Contrast the Ways in Which Two Poets Create Sympathy for Their Characters – ‘on a Portrait of a Deaf Man’ and ‘the River God’.. (2016, Apr 11). Retrieved from http://studymoose.com/compare-and-contrast-the-ways-in-which-two-poets-create-sympathy-for-their-characters-on-a-portrait-of-a-deaf-man-and-the-river-god-essay 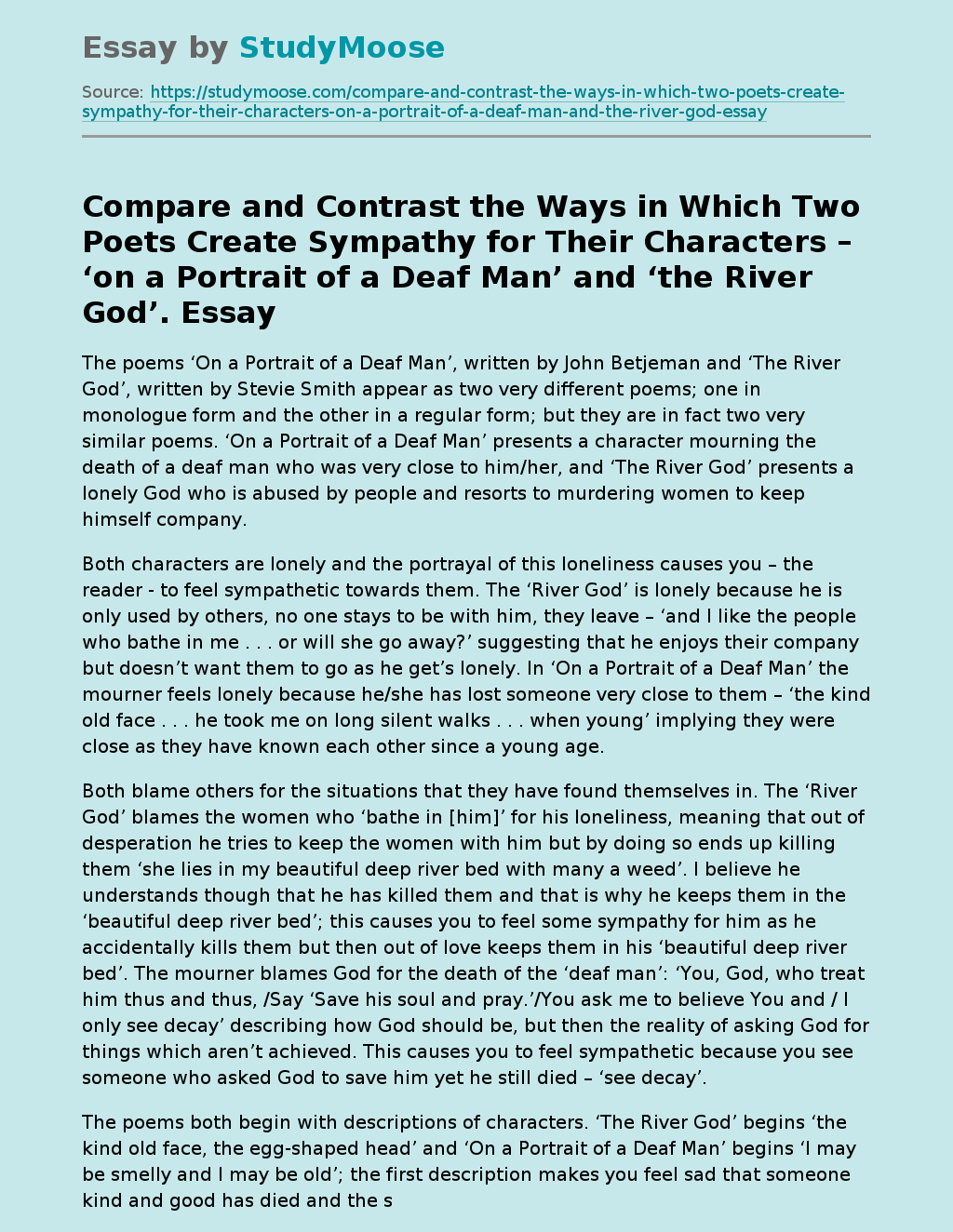