How does Robert Swindells create sympathy for Link, and homeless people, in his novel, Stone Cold?

In the novel “Stone Cold”, Swindells tries to create a sympathetic atmosphere for, one of the main characters, “Link” and other homeless people in general. To do this; he uses a variety of techniques in his novel to help get the reader too sympathise with Link and the other homeless people.

The first technique he uses is first person narrative. This is shown when Link says; “they avoid looking at me. Right now I’m sitting in a doorway watching the passers-by”.

Turn in your highest-quality paper
Get a qualified writer to help you with
“ How does Robert Swindells create sympathy for Link, and homeless people, in his novel, Stone Cold? ”
Get high-quality paper
NEW! AI matching with writers

This uses first person narrative as the words “me” and “I’m” have been used, meaning Link is saying it. He implies that it is the pedestrians trying to “avoid” him, acting like he is not there. As if he’s invisible. Which is shown when Swindells uses the word “they”- also making the reader feel as if Link is addressing them, engaging the reader, making them feel pity and guilt towards Link. He also uses first person narrative when he says, “It was still dark, and bitterly cold as I began to peel of my sleeping bag”.

Again, he uses first person narrative as he uses the words “me” and “I”. This creates sympathy as he uses strong words like “bitterly” which makes emphasises the fact how cold he is. As words like “dark” has been used it gives the reader an insight of link’s feelings of how frightened he is, as he “peels” of his sleeping bag, constantly in pain- in the depths of despair.

Secondly, the author creates sympathy by showing the reasons for becoming homeless, how easy it seems to become homeless and that it’s not always their fault for ending up on the streets. This is shown right at the beginning of the book when Link states; “But that’s not why I ended up like this. No Vincent’s to blame for that”. As soon as the reader finishes reading this, they are instantly curious of: Who Vincent is? Why he done what he did? Also, how he done it? This is emphasised when Link says, “Vincent is to blame.” Using a short sentence and leaving the reader on a cliff-hanger. This creates sympathy for Link as it shows how it was not in any way link’s fault for becoming how he is and makes the reader think of what dreadful thing Vincent done too make a fourteen year-old boy run away from his warm, safe and secure on the “Stone Cold” pavements”, in the freezing, frightening and reckless streets of London.

Thirdly, when Link arrives in London it is his very first time, during this time period he is presented to be very naïve; making many vital mistakes which can never be fixed. This is shown as Link uses the metaphor, “You’re on the old downward spiral and that’s that,” When Link says the word “old” in the metaphor to describe the “spiral” it makes it seem as if Link has many mistakes before Link was homeless, causing the reader too sympathise with Link. Also, Link stats; “that was my second mistake”, causing the reader too expect more mistakes too come in the nearby future. The fact that Link uses a metaphor, heightens the fact that once you make the first crucial mistake. There’s no going back.

Fourthly, Swindells creates sympathy by showing that there is no government aid or support for Link and the other homeless people. This is implied during Link’s search for money when he says; “You mean I’ll get no benefit- nothing?” The author creates sympathy as he makes the government seem like they are doing nothing to help Link, making the reader portray an egotistical image of them. After he says this he adds “-nothing” to really emphasise the fact that the government isn’t giving Link (and the other homeless people) one single penny. This enforces the fact that link has nothing creating sympathetic atmosphere.

Fifthly, the author tries to make sympathy for Link by showing how badly Link is treated by: his family, the general public, his landlord Rat face and even the other homeless people! Vince –Link’s mum’s boyfriend- is shown to treat Link exceedingly bad due to violence, which is shown when Link states, “Vince started slapping me around the head!” When this is said it builds up a reputation for Vince; making him seem like a diabolical man, giving the reader an insight of Vince’s true monstrosity and show the upsetting reality of Link’s depressing life. Hence sympathy created for Link. Also when the word “head” is mentioned it causes the reader to feel more sympathy for Link due to the head being a very important and could seriously injure someone; showing the sheer hatred of Vince towards Link.

The dreaded Landlord, known as “Rat-face”, also treats Link horribly, this is shown when Link says; “He had a bunch if my shirt in his fist and his face was an inch away from mine” This creates sympathy towards Link as it shows how threatening Rat-face is being towards the fourteen year old boy, Link. When words like, “fist” are used it give the reader a sense of danger and helplessness from Link; making the landlord over-powering, intimidating and a more authoritative person. Link is also shown disrespect from other homeless people who show no mercy towards him, this is shown when the other homeless man says; “Sod off, kiddo, before I drop yer” As the man states the word, “kiddo” it reminds the reader how young and vulnerable Link is towards other threatening people. It also shows that the homeless person know he is young; portraying an evil image of the man as he bully Links around.

Sixthly, the author creates sympathy by the use of detailed description of the terrible weather conditions endured by Link and the other homeless people. This is shown when Link says,” Spend one January night in a doorway and you’ll know why” Link tells the reader how harsh the weather is without actually describing it; he implies how disgraceful it is by saying “you’ll know why” making a cliff-hanger and causing an effect on the reader as they are left to make up in their minds what horrendous conditions Link – and the other homeless people- had to stay in.

Link also says; “It was dark and bitterly cold as I began to peel of my sleeping bag” As the author adds extra detailed words like, “bitterly” it gives the reader a real sense of the sheer coldness of being on the streets. Swindells also says the phrase; “peel of my sleeping bag” showing how uncomfortable Link is and how easy tasks can become very difficult. Link also states, “It was raw morning with a sneaky wind which came out of the side streets and went right through you” Swindells emphasises how freezing cold it is by using the metaphor; “went right through you” getting the reader to feel for Link and sympathise with him as he is forced to be prey to the brutal winds. Also when the term, “raw morning” is used it gives the reader an idea of fresh; yet bitter conditions.

Seventhly, and finally, sympathy is created as a sense danger is found throughout the whole novel of “Stone Cold”. As soon as Link becomes homeless he soon becomes aware of the dangers, this is shown when Link states; “There are guys so desperate or so crazy, they’ll knife you or batter your head in for your sleeping bag and the coppers you’ve got in your pocket” When this is said it gives the reader a sense of despair and how much people will do for so little. Also, as Link is going through this it makes the reader sympathetic for Link as they realise his helplessness and how he’s at the Brink if despair…Also in Shelter’s narrative he says; “Nobody knows they’re there, they’re invisible.” When this is says it shows how professional Shelter is at murdering people; giving the reader a real sense of danger for Link as he has many encounters with this skilled murderer, showing Link’s vulnerability. When shelter says; “They’re invisible” he uses a metaphor to show that no one will ever find them and it’s like the victims are not even there.

In conclusion Robert Swindells uses many successful ways and techniques to create sympathy for Link and the other homeless people in his novel, “Stone Cold” This builds up to create a sympathetic atmosphere throughout the whole of the book.

How does Robert Swindells create sympathy for Link, and homeless people, in his novel, Stone Cold?. (2017, Nov 02). Retrieved from http://studymoose.com/how-does-robert-swindells-create-sympathy-for-link-and-homeless-people-in-his-novel-stone-cold-essay 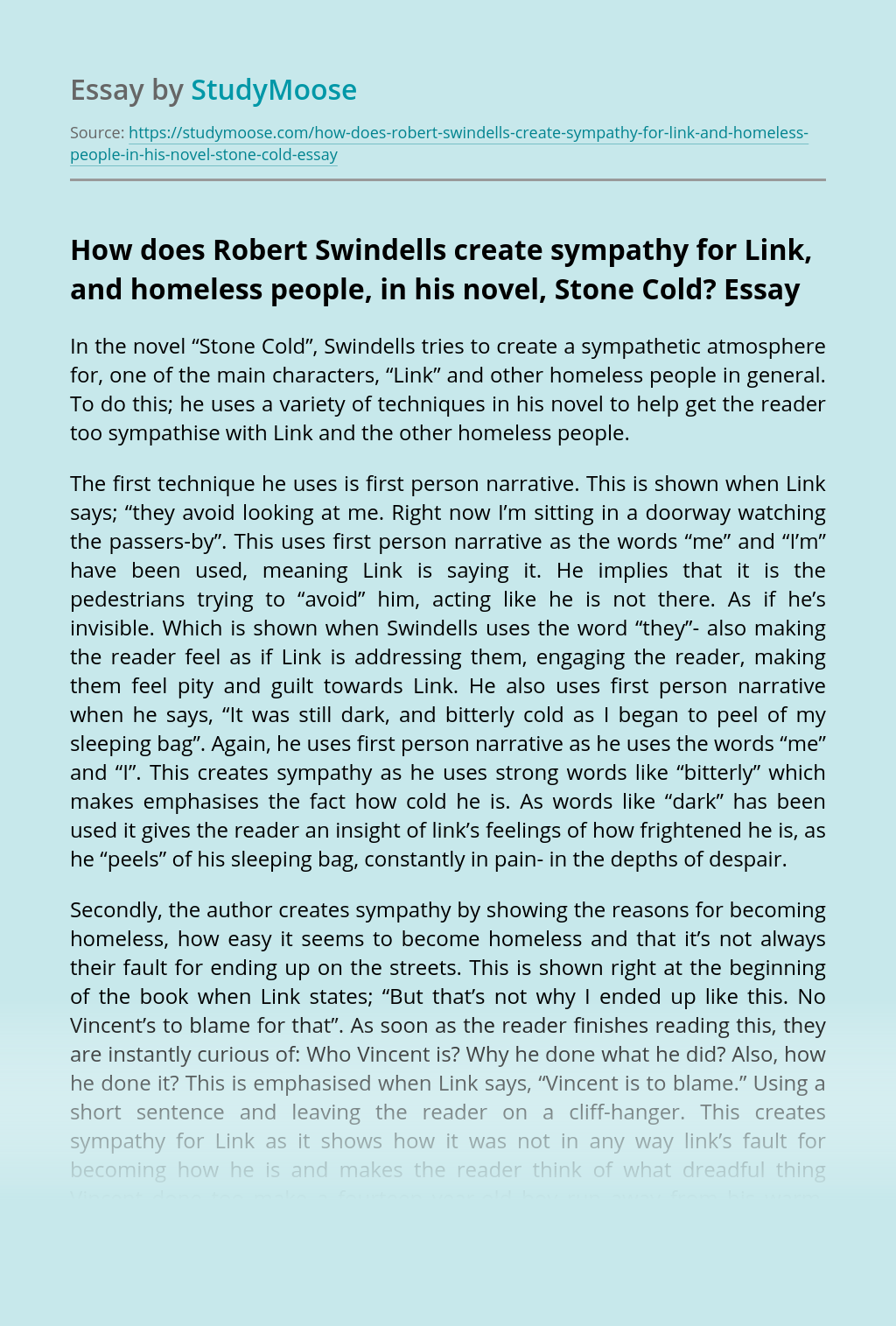 Turn in your highest-quality paper
Get a qualified writer to help you with
“ How does Robert Swindells create sympathy for Link, and homeless people, in his novel, Stone Cold? ”
Get high-quality paper
Helping students since 2015
Stay Safe, Stay Original