Compare and Contrast the Tragic Flaw(s) of Macbeth and Oedipus

Macbeth visualized himself as a forceful, powerful ruler who begins the trilogy in absolute control of the situation. As the story progresses, however, Macbeths power and pride are broken down because he made it his destiny. As for Oedipus, he was a pitiful man who has been crushed by the avenging gods and fate. He seems to be a wiser, soberer man, rising majestically above his misfortunes. When Oedipus the king begins, Oedipus exhibits wisdom, love for his children and his subjects, and a reputation for high moral standards.

Don't use plagiarized sources. Get your custom essay on
“ Compare and Contrast the Tragic Flaw(s) of Macbeth and Oedipus ”
Get custom paper
NEW! smart matching with writer

He has a passion for truth, and shows ourage in the face of disaster or conflict.

These same noble qualities, however, also lead to his inevitable tragic downfall. His wisdom becomes self-righteousness, and he refuses to see that he s married his own mother. Macbeth, with a distinct character than Oedipus, possessed his impure wisdom from Lady Macbeth. He had no love for his friends and his reputation as thane was degrading.

Much like Oedipus, his character lead to his inevitable tragic downfall. The one trait of Oedipus that doesn t change in the course of the play is his strength and courage in the face of disaster.

As the net of guilt tightens on him with each revelation about the truth, Oedipus grew stubborn in finding closure to the prophecy. When Macbeth found out about his prophecy, he deliberately seek his position as thane in an immoral way. Every step Oedipus takes to solve the mystery of Laios murder brings him closer to self-exposure, yet he never hesitates to pursue that truth.

When the last piece of the puzzle falls into place, Oedipus the detective has become Oedipus the criminal. But his courage and strength help him endure the pain and suffering that come with knowledge of hat he has done.

Oedipus search for the truth leads him to the discovery that he isn t a child of Luck, but a man of misfortune. His fate was determined years before his birth, as proven by the prophecy of the oracles. All he can do is live out his destiny, but he does this with such dignity and heroism that he shows there is nobility even in suffering and despair. Oedipus can be assume as a notable man for blinding himself and Macbeth was known as a taint villain. Oedipus has shown what it means to endure in the face of certain defeat. He has shown what it takes to survive in world that is ruled by unpredictable fate.

He has shown the true meaning of suffering and despair. He earns my respect and sympathy when he chooses to live rather than die, and make his life an example to others of how guilt and pride may lead to self knowledge. Macbeth messed with his own destiny by holding an untrue position as thane. The impression he left was a cynical man with no dignity as a human. His tragic death was cause by his eager schemes and redundant murder scenes. His death was inevitable and if the story wasn t going to end his life with tragedy, I would have wish them to do so.

Compare and Contrast the Tragic Flaw(s) of Macbeth and Oedipus. (2020, Jun 01). Retrieved from http://studymoose.com/compare-and-contrast-the-tragic-flaws-of-macbeth-and-oedipus-new-essay 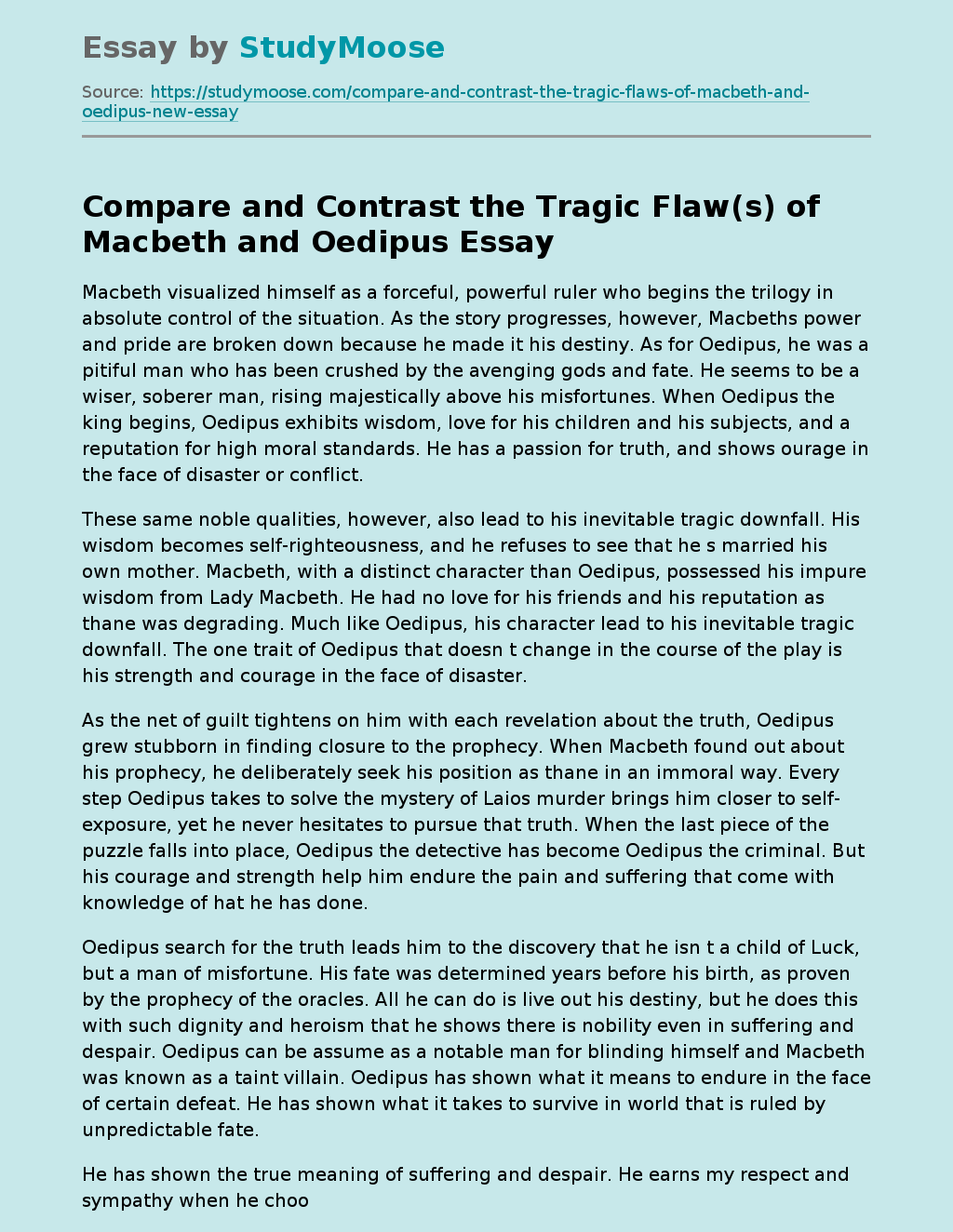