Macbeth's Stubbornness As His Tragic Flaw

In the tragedy of Macbeth by William Shakespeare;  His wife encourages him to murder King Duncan in order to be the king of Scotland. The three witches use their charms, and prophecies against Macbeth. The weird sisters are nonhuman being who convey that they are supernatural who brings depravity, darkness, and chaos throughout the play.

The witches prove their supernatural when the first sister is willing to impotent the sailor’s wife “I’ll drain him dry as hay. Sleep shall neither night nor day.

Don't use plagiarized sources. Get your custom essay on
“ Macbeth’s Stubbornness As His Tragic Flaw ”
Get custom paper
NEW! smart matching with writer

Hang upon his penthouse lid. He shall live a man forbid…look what I have”(1.3.18-26). These lines reinforce the evidence and aware the fact that the witches are willing to punish the sailor’s wife by draining the sailor. Shakespeare reveals how evil they are and depravity leads to knowing that they can change the gender of humans. The witches illustrate that the supernatural can create depravity that strangles the heart of Macbeth and the other human beings as well.

Darkness is symbolic and used as a shelter of evil. This changes the mood to gloomy and the witches have a certain power to controls it. It prevails from the first until the end of the play. The three witches chanting “Fair is foul, and foul is fair. Hover through the fog and filthy air’(1.1.12-13). These quote illustrate that thing that are beautiful “fair’ can turn ugly “foul”, while the things that are ugly “foul” can turn to be beautiful. Even though that they are ugly, they have the power to predict Macbeth’s future, calling him as the Thane of Glamis, Thane of Cawdor, and King hereafter.

In addition, they prophesy that Banquo’s descendants will be kings but not him. The witches quickly display that darkness is their source of energy.

The weird sisters have goals throughout the play by spreading evil that causes chaos. When the three sisters tell Macbeth, “Lesser than Macbeth and greater”(1.3.66). This means that there is greater and stronger than Macbeth and could be Banquo’s son. That is where Macbeth aggressively tries to kill Banquo’s son. Thus, “Not so happy, yet much happier” means that he will be unhappy because he will die, but he will be happier as he doesn’t have to face with the guilt of murder so many people. The weird sisters get a success in the end knowing the fact that chaos is the main reason why Macbeth murder so many lives.

Macbeth's Stubbornness As His Tragic Flaw. (2021, Dec 02). Retrieved from http://studymoose.com/macbeth-s-stubbornness-as-his-tragic-flaw-essay 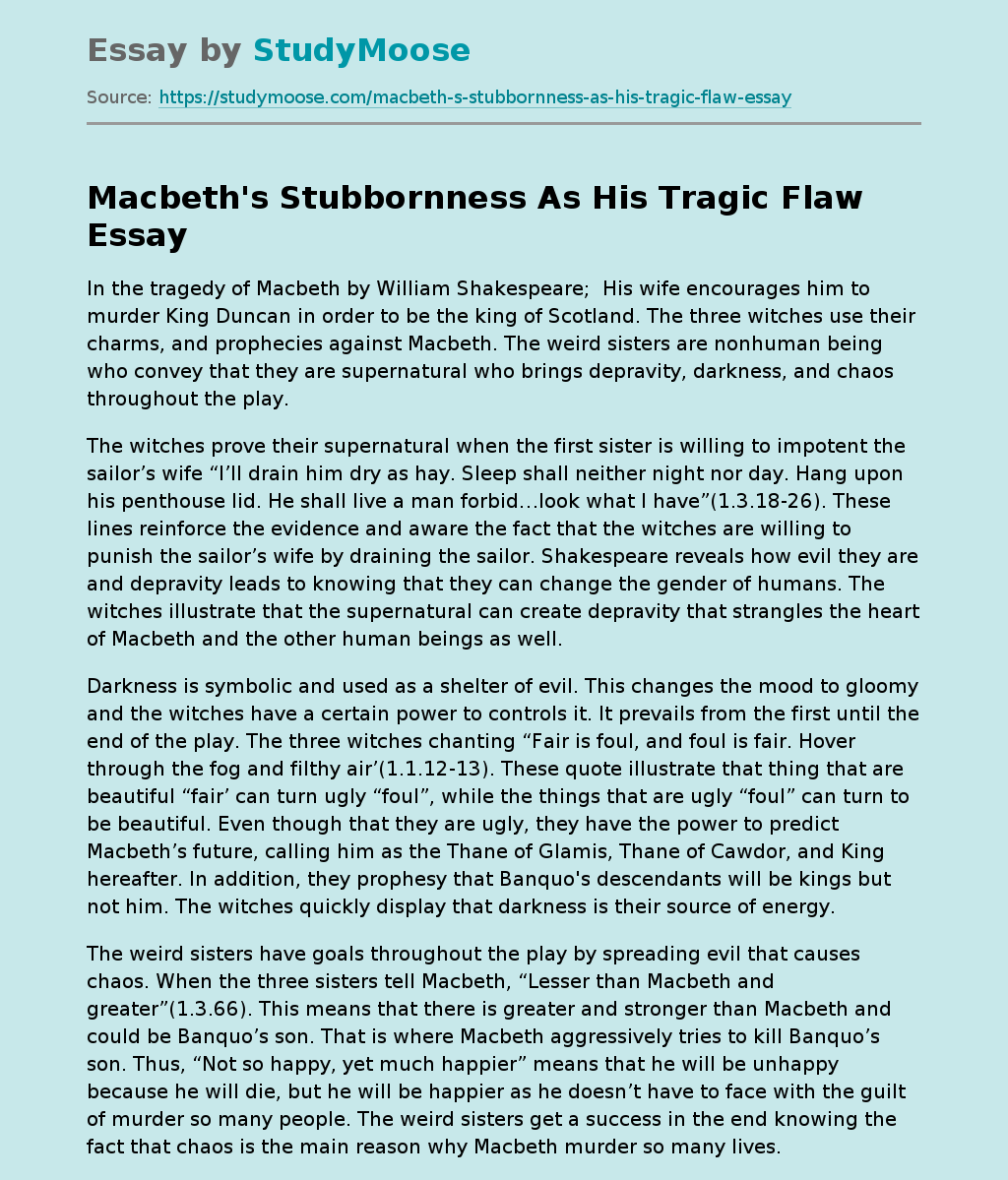