In this study I chose to compare the strong willed characters of Emma Woodhouse from Jane Austen’s Emma, and Muriel Spark’s eccentric Edinburgh schoolteacher in the Prime of Miss Jean Brodie.

Understandably the social and historical context of these novels is very different. When Emma was written in eighteenteen-sixteen, workingwomen were often scorned upon – women were expected to quietly pass their time caring for their children and looking after the home. In stark contrast to this, Miss Jean Brodie, which was first published in nineteen-sixty-one tells of a society containing “legions of her kind during the nineteen-thirties… who crowded their war-bereaved spinsterhood with voyages of discovery”.

Don't use plagiarized sources. Get your custom essay on
“ A comparative analysis of strong willed heroines in Jane Austen’s Emma and Muriel Spark’s Prime of Miss Jean Brodie ”
Get custom paper
NEW! smart matching with writer

Despite the strong differences in social context, the heroines of both novels are strong-minded characters, who are individual and stand out from the rest of the society in which they live:

“Dear Emma was of no feeble character; she was more equal to her situation than most girls would have been, and had sense and energy and spirits”

Miss Brodie was unashamed of strongly disagreeing with the opinions of her fellows and also her superiors:

“Miss Mackay retains him on the wall because she believes in the slogan “safety first”.

But Safety does not come first. Goodness, Truth and Beauty come first.”

In stark contrast to the opinions of the rest of society neither of the heroines initially approves of marriage.

Emma claims that she has “very little intention of ever marrying at all”. The same was true of Miss Brodie:

“Yes, but she never got married like our mothers and fathers.”

“If I were to receive a proposal of marriage tomorrow from the Lord Lyon King-of-Arms I would decline it.”

Both characters are entirely independent and do not rely on men, who, at the time both novels were written were still the dominant sex.

Emma Woodhouse and Miss Brodie are both dedicated characters. Emma is dedicated to her father:

” “While her dear father lived, any change of condition must be impossible for her. She could never quit him.””

“She was dedicated to her girls in a way.”

Both Emma and Miss Brodie believe themselves to be greatly assisting their protï¿½gï¿½s; however, they are misconceived: what they themselves see as acts of kindness and benefit are often hindrances to their friends and students. Emma persuades Harriet to refuse Robert Martin’s proposal of marriage:

“You think I ought to refuse him then,”

Mr Knightley points out that Emma has been no friend to Harriet because she has given her a sense of superiority, and “raised her expectations too high.” Emma believes that “a girl of such loveliness as Harriet, has a certainty of being admired and sought after,” however, this is untrue. As the novel progresses Emma encourages Harriet to fall in love with Mr. Elton, Mr. Churchill and Mr. Knightley: if it had not been for Emma’s intervention Harriet would have been content with Mr. Martin and would not have been continually falling in and out of love, and repeatedly having her heart broken.

In a similar way Miss Brodie feels that she is doing her students a great favour through her unusual teaching methods:

“Miss Brodie’s pupils were vastly informed on a lot of subjects irrelevant to the authorised school curriculum, as the headmistress said, and useless to the school as a school.”

Through the eyes of the other Junior school teaching staff at least the girls of the Brodie set would have been better of gaining a more appropriate knowledge from the traditional teaching methods. The reader may also presume that at least two of the girls from the Brody group, Monica Douglas and Mary Macgregor did not benefit from being members of the Brodie set:

“I never had any hopes of Mary”

“Monica…has no spiritual insight, that is why she has a bad temper.”

“Rose shook off Miss Brodie’s influence as a dog shakes pond water from its coat.”

Miss Brodie and Emma are both confident women who think highly of themselves, and scorn upon those whom they believe to be lower than themselves in society:

“A disposition to think a little too well of herself”

“They are all gross materialists, these women in the Senior school.”

As the novels close both women succumb to the issue or event which they have been avoiding and battling against.

Throughout Jane Austen’s novel Emma has defied marriage, and thought, “Marriage, in fact, would not do for her” However, when Mr. Knightley proposes her opinion rapidly changes:

“This proposal of his, this plan of marrying and continuing at Hartfield – the more she contemplated it, the more pleasing it became.”

During Muriel Spark’s novel Miss Brodie is adamant that she will not apply for a post at one of the progressive schools:

“I shall remain at this education factory”

“There had been previous plots to remove her from Blaine, which had been foiled.”

Miss Brodie was determined not to leave her girls:

“Needless to say, I shall not resign.”

Of the teacher’s plan to remove her from the school it was said:

Both are women of beauty, grace, poise and elegance, who had many admirers and were often perceived by male acquaintances to be perfect:

“Mr. Knightley, in fact was one of the few people who could see faults in Emma Woodhouse,”

“Miss Brodie was a figure of glamorous activity.”

“Both were already a little in love with Miss Brodie.”

“Can you imagine anything nearer perfect beauty than Emma altogether – face and figure? …She is loveliness itself.”

“Lifted her fine dark Roman head with dignity. She had often told the girls that her dead Hugh had admired her head for its Roman appearance.”

In a literary context the novels are similar in their themes, as both present a female heroine. As the novels progress both portray the exposure of their heroine’s faults and also a growth in self knowledge. Both novels contemplate the theme of justice, in Jane Austen’s novel the reader is left wondering if it is fair that Emma is left to be hapy and content after the many mistake and wrong doings she had made. Muriel Spark’s novel encourages the reader to contemplate the justice of Miss Jean Brodie’s betrayal.

In conclusion the strong willed heroines in Jane Austen’s Emma and Muriel Spark’s prime of Miss jean Brodie are very similar. Both are determined to speak of their own opinions even if they are in contradiction to the rest of society. They are both independent. The main difference between the characters is that Emma Woodhouse is respected and looked up to by her fellows, whereas Miss. Brodie is often scorned on. 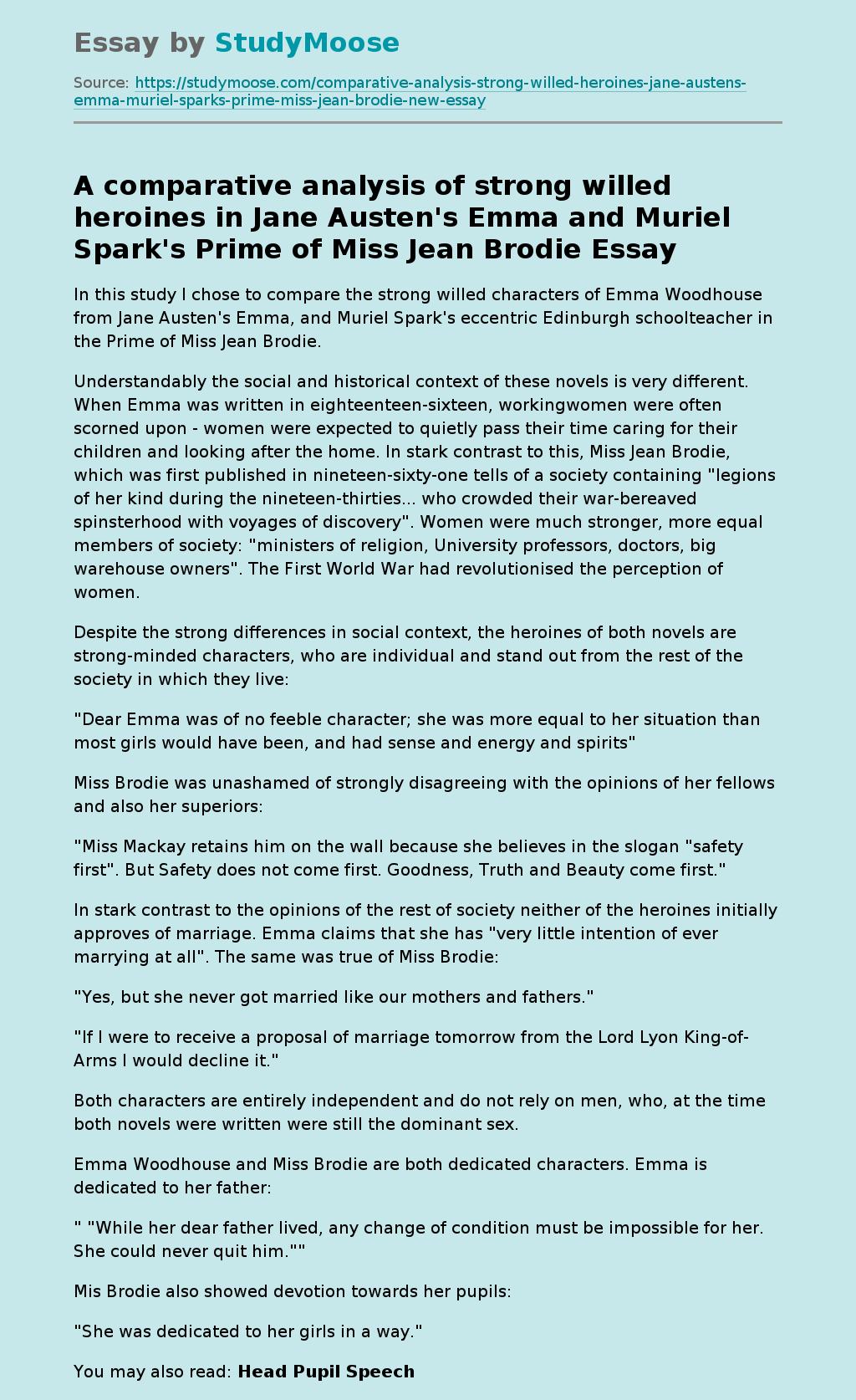