Coming of Age in Mississippi

Yet in reality, not all people are born and raised in an ideal environment. In many instances, a person may be born into a life of struggle and challenges, in which case coming of age becomes a matter of interaction between the influence of elements in life to a person and the same person’s response to such elements. In Anne Moody’s memoir, Coming of Age in Mississippi, published in 1968, the reader sees the author’s remarkable coming of age.

Don't use plagiarized sources. Get your custom essay on
“ Coming of Age in Mississippi ”
Get custom paper
NEW! smart matching with writer

In a way, it can be said that the elements in Anne’s life has caused her to witness conflict between discrimination and inequality.

Major elements such as characters, setting, and conflict contribute to the plot that traces her development from a young girl to a highly principled woman. To begin with, it is important to know that the setting plays a part in Anne’s development. Anne was born in Centreville, Mississippi in 1940 to an impoverished African-American family. Already, the time and place of her birth give clues to what kind of life she is destined to face.

Firstly, life in Mississippi is obviously varied as factors such as time and socioeconomic standing affects its quality.

But because Anne was born in a specific time in Mississippi, it is easy to assume what the type of setting it was. Mississippi in the 1940s was a place deeply entrenched in the practices of racial segregation. It was a time when it was legal for society to treat individuals according to the color of their skin.

In virtually all of these instances, the blacks as well as other “colored” people were marginalized. Anne squarely belonged to this faction. And because she was born to a poor family, one can only imagine the kind of struggle that she had to face.

Not only was she marginalized on account of her race but she also was at the lowest economic standing among her own people. Being in a rural setting also did not help as it was in such a place that antiquated beliefs in the hierarchy of races tend to flourish most. Similar to the setting, the characters around Anne also serve as an instrumental element in her coming of age. Anne is essentially surrounded by people of diverse beliefs. The society, which may serve as a collective character in itself, is polarized by stances regarding the interaction between whites and blacks.

On one side of the group are the ones who believe in the equality of the races; on the other are those who advance the idea of white supremacy and black inferiority. Also, there are specific characters in her life that have different influences in her. First is her mother, Toosweet. Whereas Toosweet does encourage Anne to study and strives for her as well as her siblings, she is pessimistic and seems to have accepted upon herself that the fate of the blacks will not change. In contrast to Toosweet is Mrs. Rice, Anne’s teacher. Mrs.

Rice acts as a second mother to Anne yet unlike Toosweet she encourages Anne’s budding passion for the civil rights movement. She informs Anne of the NAACP and of the race relations in Mississippi. She is in a way a guide that encourages Anne to join the movement in opposition to Toosweet’s disapproval of Anne’s actions. The coexistence of the setting and the characters in turn contribute to the main conflict of the story. As said before, Mississippi was a strongly segregated state. As such, the differences in the characters’ stance with regard to the issue of race provide a conflict that the main character, Anne, has to confront.

Anne witnesses the oppression of African Americans in the hands of white people. Apart from the social injustices that are made effectively legal by the segregation laws, the treatment of blacks have become atrocious to the point that murder and all forms of indignities were being perpetuated with impunity. The question that arises, therefore, is what Anne ought to do. Should she remain silent and accepting, as her mother instructs her, for the sake of her personal safety, or should she fight for her rights, as is her desire and on encouragement of her teacher, for both her personal and the black people collective freedom from oppression?

Anne’s response to the conflict that arises from the setting she exists in and the characters’ treatment of racial issues in turn drives the plot of the story. As the story unfolds, the reader learns of how Anne eventually transforms from a young, impoverished girl to an outspoken and strong advocate of the civil rights movement. One sees her achieve personal triumph in continuing her studies and opting to join the NAACP to advance equality among the races.

Basically, her coming of age is highlighted by an inspiring acquisition of personal principles that promote her beliefs. Although the plot ends with uncertainty since it was published in 1968, the reader is given the assurance that she continues on with her advocacy as she can be seen riding a bus towards Washington D. C. wondering if her people can eventually overcome oppression. In conclusion, it is clear that the elements in Anne Moody’s life all work together to render her story a remarkable tale of struggle and triumph.

Firstly, the setting of Anne’s life determines her standing in society. Then, the existence of various characters in the setting creates a conflict in the form of a question: should Anne fight for freedom or should she succumb to oppression? The conflict is resolved in the plot of her memoir wherein the writer learns her unraveling as a young woman. She acquires education, becomes the homecoming queen, and ultimately decides to take a stand against injustice. Her development from being a young impoverished girl to a spirited young woman is a tale of triumph.

It is true that Anne could have followed any other life had she been born in another setting, with different people surrounding her, and different conflicts confronting her. But the fact of the matter is she was born in Mississippi in a time when injustice reigned; she is surrounded by specific people that helped shape her life experiences and her perception of the world. And as a result, she becomes a unique person with unique beliefs and principles. She became the Anne Moody that the reader becomes intimately aware of as her life unravels in the pages of her memoirs.

Coming of Age in Mississippi. (2018, Oct 08). Retrieved from http://studymoose.com/coming-of-age-in-mississippi-2-essay 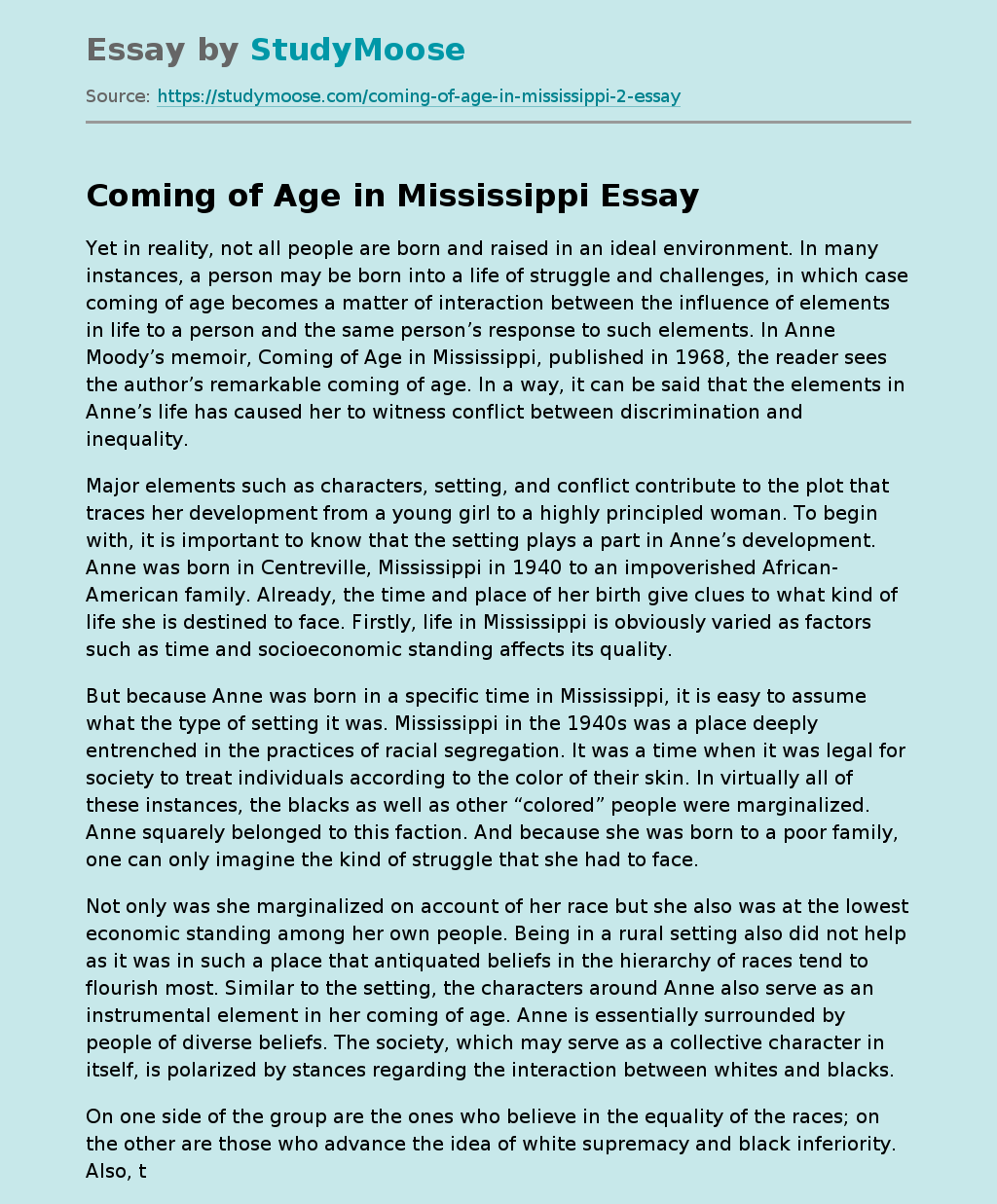