In 1549, the Captaincy Colonies of Brazil were united into the Governorate General of Brazil, where they were provincial captaincies of Brazil; Luís Teixeira, 1574. Main article: Colonial Brazil Explorer Pedro Álvares Cabral landed on April 22, 1500 in what is today Porto Seguro, Brazil. Permanent habitation did not begin until São Vicente was founded in 1532, although temporary trading posts were established earlier to collect brazilwood, used as a dye. From 1534 to 1536, 15 Captaincy colonies were created in Portuguese America. The captaincies were autonomous, and mostly private, colonies of the Portuguese Empire, each owned and run by a Captain-major.

Don't use plagiarized sources. Get your custom essay on
“ Colonization of Brazil ”
Get custom paper
NEW! smart matching with writer

In 1549, due to their failure and limited success, the Captaincy Colonies of Brazil were united into the Governorate General of Brazil. The captaincy colonies were reorganized as provincial districts to the Governorate.

The captaincies continued to be ruled by their hereditary captain-majors but they now reported to the Governor-General of Brazil. The new system was implemented so that Portuguese America could be managed correctly and provide a steady and wealthy income for the Portuguese Empire.

The capital of the new governorate established its capital at São Salvador and the first Jesuits arrived the same year. With permanent settlement came the establishment of the sugar cane industry and its intensive labor demands which were met with Native and later African slaves. From 1565 through 1567, Mem de Sá, the third Governor General of Brazil, successfully destroyed a ten year-old French colony called France Antarctique, at Guanabara Bay.

He and his nephew, Estácio de Sá, then founded the city of Rio de Janeiro on March 1567.

In 1621, Philip II of Portugal divided the Governorate General of Brazil into two separate and autonomous colonies, the State of Maranhão and the State of Brazil. Regarding this period it is preferable to refer to “Portuguese America” rather than “Portuguese Brazil” or “Colonial Brazil”, as the states were two separate colonies, each with their own governor general and government. Between 1630 and 1654, the Netherlands came to control part of Brazil’s Northeast region, with their capital in Recife.

The new states would fair poorly and only last 3 years. In 1775, the three colonies of Portuguese America (the State of Brazil, the State of Maranhão and Piauí, and the State of Grão-Pará and Rio Negro) were united into a singular colony, under the State of Brazil. This arrangement would last until the end of Colonial Brazil. As a result, Brazil did not split into several countries, as happened to its Spanish-speaking neighbors. 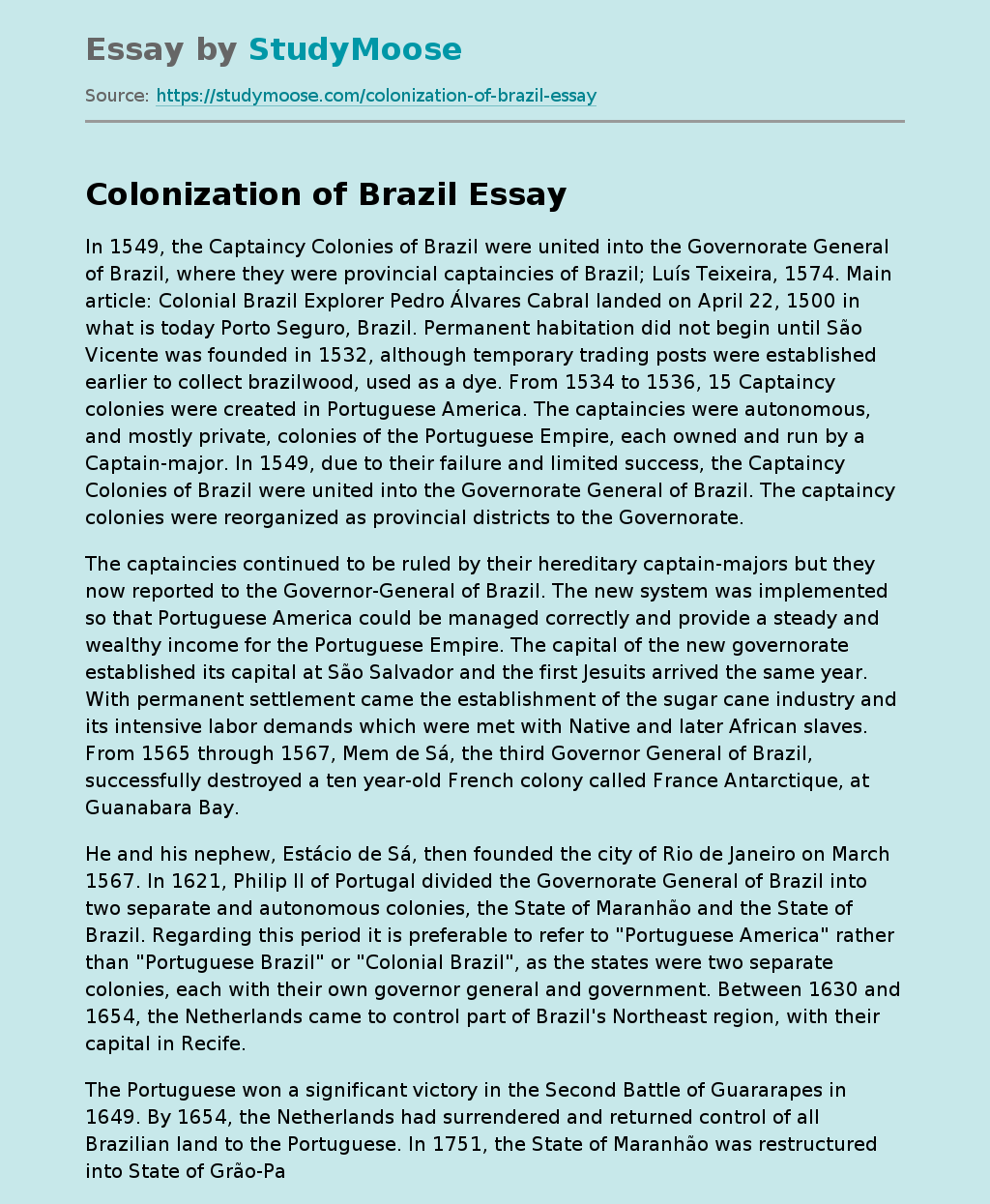