Cleopatra’s timeless fascination exists for the characters of the play, for Shakespeare’s public and ourselves as a modern audience. – How do you respond to this statement from your reading of the play? Shakespeare’s plays all have universal themes incorporated within the play such as love, death and jealousy that audiences throughout history would have enjoyed and empathised with. In ‘Antony and Cleopatra;’ I think Shakespeare has used these universal themes in the play, but he has also created a universal fascination in the character of Cleopatra.

Cleopatra was a lusty woman; she had a high sex drive and she had control over the men she chose to love. Her unparalleled beauty, intelligence, lust and presence affected the characters in the play, the Jacobean audiences and she still fascinates the modern audience who see the play ‘Antony and Cleopatra.’ Amanda Mabillard tells us that, “Her (Cleopatra) voice, with which, like an instrument of many strings, she could pass from one language to another; so that there were few of the barbarian nations that she answered by an interpreter; to most of them she spoke herself, as to the Ethiopians, Hebrews, Arabians, Syrians, Parthians, and many others, whose language she had learnt.

” This shows us the extent of Cleopatra’s intelligence.

Enobarbus is the truth teller and mirror of the play; he is the just and unbiased Roman, which allows him to reflect a true judgment. We highly value his opinion of Cleopatra, and in Act 2 Scene 2 where Shakespeare drew much inspiration from Plutarch North’s text, we see Enobarbus articulate his impression of the Queen of Egypt and this can help us to see the fascination of Cleopatra for the characters in the play. In this scene there is a lot of hyperbolic language used to describe Cleopatra which shows us how fascinating she is. “the barge she sat in, like a burnished throne, Burned on the water.”

This metaphor tells us that Cleopatra is so seductive and fiery that she sets barges on fire with her amazingly seductive looks and unlimited lust. This action of water being on fire is a contradiction and it is Cleopatra transcending the impossible; this could be a reference to her capability to surpass the impossible, it is also a paradoxical statement, linking to Cleopatra’s paradoxical and contradictory personality.

A physical depiction of this paradox is shown in the quotations; “The winds were lovesick with them” and “Whistling to th’air; which, but for vacancy, had gone to gaze on Cleopatra too.” Shakespeare uses personification and hyperbole; even the wind and air become enthralled by her beauty. The elements come alive around Cleopatra and it is as if she controls them, giving her the status and control of a Goddess as she is much referred to. “that Venus where we see.” Cleopatra as the Goddess “Venus” shows her fascination through this status, Goddesses had all power and Venus as the Goddess of love may add a higher level of attraction for the men in the play? Egyptians worshipped Gods, and to have this reputation shows us why she was so enthralling to the characters in the play.

“Fall not a tear, I say one them rates / All that is won and lost.” This demonstrates that Antony believes one of her tears is worth the world to him and he is the character that is utterly in love with her. William Hazlitt tells us that “Antony when fighting the sea fight of Actium leaves the battle and like a doting mallard follows her flying sails.” I feel this statement supports that Antony is completely spellbound by Cleopatra. Charmain was a character close to Cleopatra and she says at Cleopatra’s death that, “In thy possession lies A lass unparalleled.” This reveals that Cleopatra was a woman to whom no other could come close, in power, beauty and intelligence. Cleopatra hypnotizes, bewitches and captivates most people she comes in contact with. However, many of the Romans did not fall under Cleopatra’s bewitching presence.

R.H.Barrow says that, “Romans might hate their enemies; but a special hatred inspires them when they speak of Cleopatra” He also says the Romans fear her power, “it is a fear of something alien, something not western.” The idea that the Romans disliked Cleopatra challenges her fascination for the characters in the play. It is also supports her bewitching qualities, because the Romans might hate her, yet this does not mean they are not fascinated by her. An example of this is in the opening of the play, when the Roman Philo calls Cleopatra a, “gypsy” and a “strumpet” but he also says, “behold and see” and in the production of the play I have seen starring Janet Suzeman we see the Romans stand and stare at Cleopatra, despising her but obviously subconsciously fascinated, as they stand and watch her. 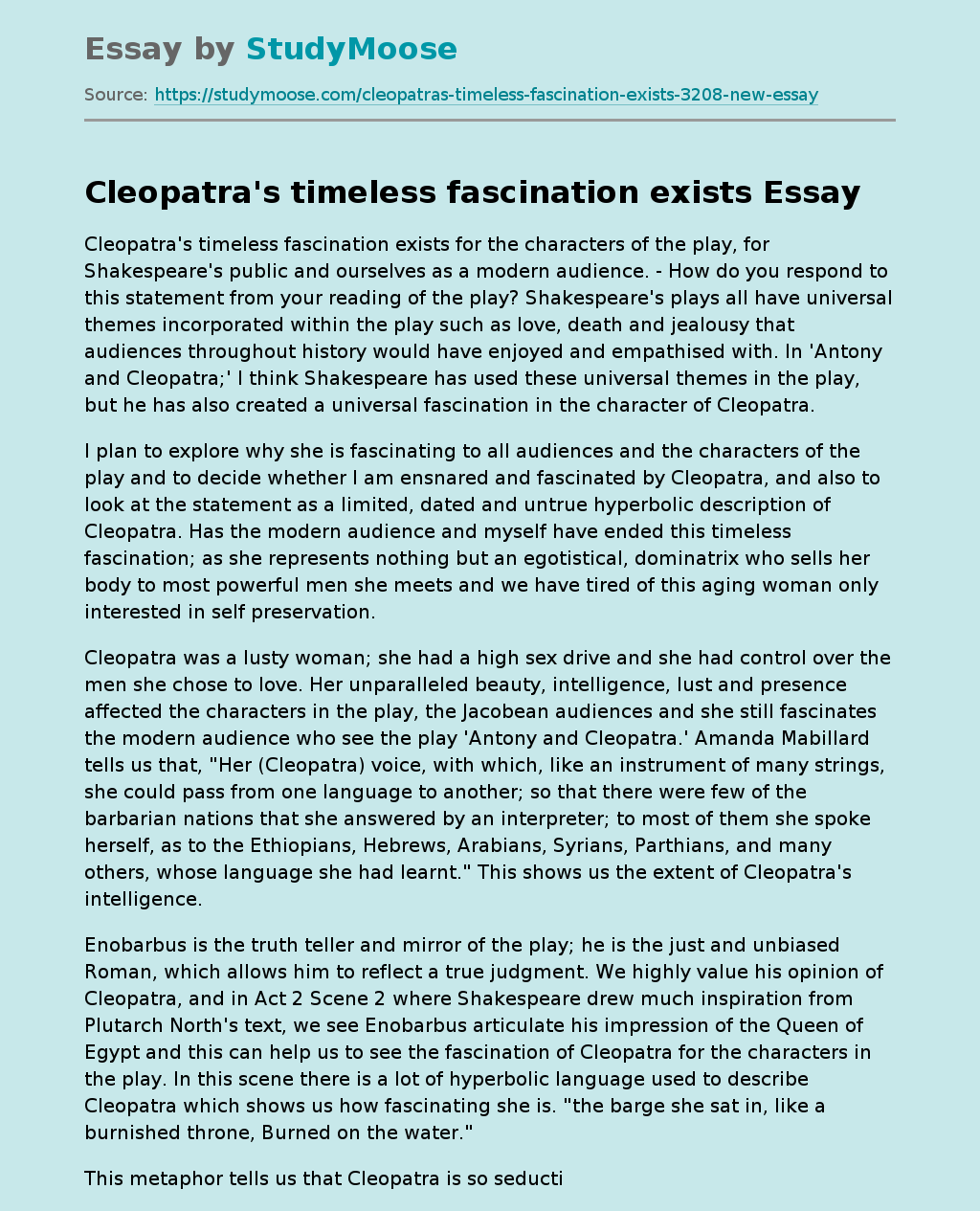